There is much more to UP or Bihar than crimes shown in films: Juhi Chaturvedi 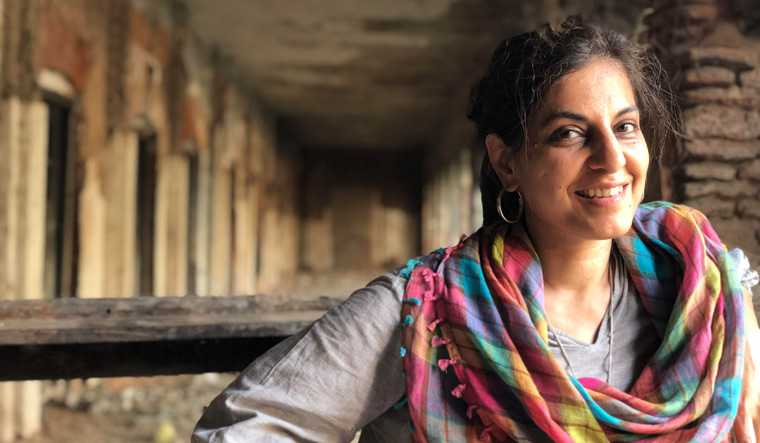 In her fourth collaboration as a screenplay writer with director Shoojit Sircar, Juhi Chaturvedi goes back to her roots—to Lucknow where she grew up, studied fine arts and worked for a daily newspaper before moving to Delhi and then to Mumbai.

Gulabo Sitabo, starring Amitabh Bachchan and Ayushmann Khurrana, with Chaturvedi’s hometown as the backdrop, revolves around an old landlord, Mirza, and his young tenant Baankey, who bicker and banter for the former’s haveli. Bantering, Chaturvedi says, is such an intrinsic part of the city.

Chaturvedi made her foray into films by writing dialogues for Sircar’s unreleased Shoebite after a successful stint in advertising, and followed it with writing Vicky Donor, Piku and October. Barring Piku, in which the lead characters travel to Kolkata briefly, the three films wereset in Delhi — where both Chaturvedi and Sircar have spent a number of years. In an interview with THE WEEK, she spoke about what it means to write a story set in a place that is so close to one’s identity, the representation of Uttar Pradesh in movies and shows, and why a digital release of the movie on Amazon Prime Video (on June 12) doesn’t bother her.

This was way back in 2017. I shared the plot with Shoojit and he laughed. I cannot tell you what the film exactly has, but when you watch it you will laugh. He heard about Mirza’s character (played by Amitabh Bachchan) and Baankey’s (Ayushmann Khurrana) existence in his life, and everything else that is there, and said only Mr Bachchan could do this, and if he likes it and agrees to do it, (we would go ahead). The moment Shoojit hears an idea, he likes sharing it with the person who he thinks could do it. He shared it with Mr Bachchan. He loved it too. The milieu, the dialect or a character just speaks to an actor or a director. Mr Bachchan could see what Shoojit was sharing with him, even though the script wasn’t ready at that time. Shoojit also knew the world I was talking about. It wasn’t decided that it is going to be Lucknow, which he wasn’t so familiar with then. But he was very familiar with old Delhi or old Kolkata, where there is a colonial resemblance. So yeah, he was quite excited and asked me to start writing it. We were still in the process of doing October at the time. Once that was done, we started with this and that took it’s own time to develop.

Since the film is set in Lucknow where you grew up, did it become too personal?

Yes, because I was born and brought up in Lucknow. I lived there till I finished my college, and I still keep going there because I still have a home. For all these years I have never attempted any film set in Lucknow because I had to be very sure that whatever I share with the world about the city, the way I have observed it, it needs to have a certain kind of authenticity and sincerity. Even as a writer, once you spend some time, you arrive at a certain kind of maturity in your thinking process, which is something more insightful. Though I know Lucknow, for me to lay it on paper and then make Shoojit experience that, and then for him to work on it in a way that everybody else experiences that, it was a process. Maybe that is why I took some time to write something about Lucknow. It is so close to me. It is my second skin. No matter where I live (later in life), Lucknow is Lucknow, it is a city of my memories. You hold it so close to yourself that you don’t want anybody to have a peek of that. It better be the right time, the right people, who you share your emotions, thoughts, observations or memories with. It’s really special – the language, the dialect, which is a mix of Arabi Urdu Hindustani. There is a general satire and lyrical way in which things are spoken and said; all of that has been a part of me.

While the process of writing, were there things that you discovered? What was the writing process like?

When you are writing towards a purpose, you focus on that. And that definitely reveals very new layers and it should. Otherwise, it would be very stale to write what you know. It is not learning and discovery then. To continue staying dedicated to a thought, to an idea, is a complex challenge. While I may think that I know this world inside out, there have been certain things that have definitely made me go back, think, relive and find out why those things were the way they were. You know, things like, the psychology and mindset of people. While you are living that life, you don’t think and dig that deep. But while reliving it, in hindsight, there is such an understanding. So yeah, I rediscovered the Lucknow I thought I knew.

What has been intriguing for me for a while now is how in most mainstream films or shows, very often the portrayal of states like Bihar and Uttar Pradesh is through crimes. As a writer, is it challenging to bring the other aspect, the lighter side of things?

Not really, because a city or an environment is multi-dimensional. It is not just one flat surface. It is not just crime. Yes, crime is one part of it. But there is much more to a UP or a Bihar. I will speak for the area where I have grown up. Frankly speaking, growing up, I didn’t experience crime. I have, instead, lived a wonderful life with cherished memories of everyone, from my househelp to the rickshawala. Crime may be working in shows and in films. Yeah, it is a good formula. It works. It really works, the world over it works. But that does not attract me.

But does that worry you?

No. Again, I think how you have lived or experienced the place can affect your thinking process and your ideas. I did not experience the state that way. Of course there were crimes and there were enough restrictions and we were not allowed to go out (at all times). I grew up in a fairly conservative society where after 6pm you could not be out. You had to do things during the day. We understood that. There was no debate about it. That was the way the city was and that is how we worked. But then, there’s so much history to the place, so much art, craft, dance. There is much more than guns. Also, I feel there is some kind of frustration that leads to crimes, people are not born like that. We are led to it out of no choice. I always feel there is something lacking for the creation of a crime environment. And politics, yes it is a great venture. The state’s politics does affect the country. But that’s fine, the crime and the politics is a part.

The title of the film draws from the very famous puppet art of the region, Gulabo Sitabo. How have you brought that in the film?

That I can’t tell you (laughs). For that, you have to see the film. But I have grown up with the Gulabo Sitabo puppetry. They would go from one gali to another, performing. And it is very specific to Lucknow, not even Kanpur, which is a few kilometres away. It is a phrase that is used very often–two best friends would be called Gulabo Sitabo, two sisters would be called Gulabo Sitabo. It is part of the language, Lucknow’s cultural history. Because Shoojit is not from there, he had to start from scratch. I was showing certain things to him, which is typically about the place, to (make him) understand the city. Certain folk art was a part of it. He absolutely loved the idea of the puppetry and suggested naming the film on it. At the same time, I also quite enjoyed the process of doing that Lucknawi conversion for Shoojit (laughs).

The entire experience, however, was meant for the theatres. Now that the film is releasing on a steaming service, how do you feel about it?

It is absolutely perfect. These are very abnormal times and they demand a change. We all need to embrace it and move forward with it. Everybody is aware that Shoojit’s film Shoebite has been stuck for years. The kind of damage it does to everyone, emotionally, psychologically, why do you want to go through it all over again when such a wonderful option, platform is available? It’s not about A versus B, but right now B is what is available and we are all just happy to have that B in our lives. I was not a part of that meeting, but Shoojit and Ronnie (Lahiri, producer) would not make a decision randomly. It’s a big decision to make and I am sure a lot of thought has gone behind it. Movie-making is not just about mounting a project, it adds value in its audience’s lives. Doing that in theatre would be great, but it’s all right if it happens elsewhere. The point is creativity or the process of creativity should not be questioned or hindered, come what may.

Has this pause, this lockdown situation, altered the way you lived life?

This whole situation that we are going through right now has taught me to live with a lot more gratitude. There is much more awareness. And, if I can say, it has taken away a lot of the unnecessary things that get attached to our lives. It has gone back to the most basic. Whatever is available, you are making do with that. Whatever isn’t available, it’s all right. One has learnt to value whatever is there –your life, lives of your loved ones, a lot more empathy for the world. What can I say? None of us have ever experienced something like this. I think emotionally we all have evolved a lot more in these two-and-a-half months. And that will impact whatever we do, in whatever way we earn our livelihood. Writing and creating is going to have the same effect. It is going to come from that place. I am not saying that we will write films about the pandemic only, but it will just come from that place of knowing (that this happened) and it is going to be a common experience for everyone on this earth right now.