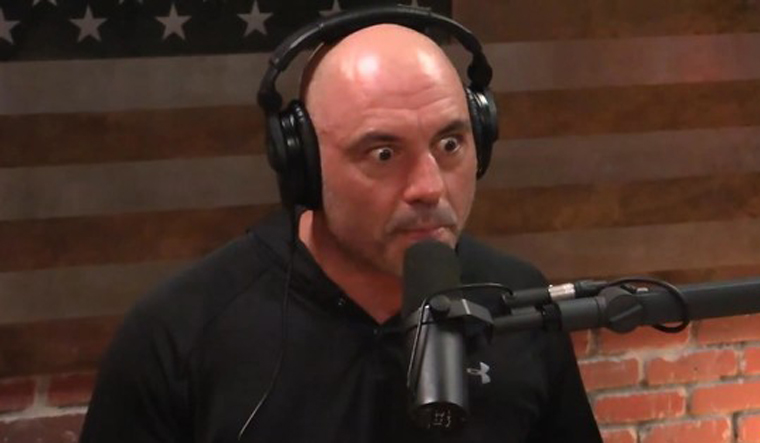 Comedian Joe Rogan on his podcast

Audio streaming service Spotify on Tuesday announced that US-based comedian Joe Rogan's podcast will be available on the platform starting September 1, and that it would become a Spotify exclusive later in the year. That means all podcasts henceforth, along with the library on YouTube, would be migrated to Spotify. Post the announcement, Spotify's shares surged 8 per cent higher. Though the platform has yet to release the acquisition details, the figure is expected to be around 100 million dollars for a multi-year licensing deal. Spotify, which has more than 700,000 podcasts on its platform and reaches nearly 300 million monthly users, has been investing heavily in the format, aiming to transform itself into the Netflix of audio.

In essence, this makes Rogan—a trained martial artist, former Fear Factor host, Ultimate Fighting Championship (UFC) commentator, marijuana enthusiast, and, now, a man with enough influence to make or break a US presidential candidate—the highest paid broadcaster in the world, The Guardian reported. And a highly unlikely one at that.

As the news of the announcement broke, the Rogan-world expectedly descended into a tizzy. In the comments section of the YouTube video where Joe Rogan made the announcement (despite the podcaster's assurances that the content would remain free, and that he would be in complete creative control), viewers bemoaned the fact that he was “selling out”, sniping at the amount of money he was receiving to make the switch.

It is hard to overestimate the impact of Rogan's switch. Apple, with iTunes, has a virtual stranglehold over the podcasting medium—which is expected to grow in advertising revenue to over $1 billion by 2021—and Rogan, without question, is the biggest name. His show, the Joe Rogan Experience (JRE), started a decade ago and has since transformed into a behemoth—the show is downloaded in the millions each month and is routinely featured among top podcasts on Apple's charts. On YouTube, he has over 8 million subscribers, and every podcast hits at least a million views within a day of release.

"A musician would need to generate 23 billion streams on Spotify to earn what they're paying Joe Rogan for his podcast rights." wrote music writer Ted Gioia on Twitter, adding that this means "Spotify values Rogan more than any musician in the history of the world".

A musician would need to generate 23 billion streams on Spotify to earn what they're paying Joe Rogan for his podcast rights (assuming a typical $.00437 payout per stream). In other words, Spotify values Rogan more than any musician in the history of the world. Sound fair to you? pic.twitter.com/zvMdY3mIQA

Usually, whenever a big independent broadcaster switches platforms (especially from bigger to smaller), the conversation revolves around the possible loss of audience the broadcaster faces. As The Verge reported, when hotshot gamer Tyler “Ninja” Blevins moved platforms from Twitch to Mixer, he brought a good number of followers with him; but, because Twitch’s viewership dwarfed Mixer's, Blevins loses out on the number of new users that Twitch could bring him.

But, in Rogan's case, the often-asked question is how much YouTube stands to lose, such is the devotion that he commands from his massive base. And how much Spotify stands to gain.

Who is Joe Rogan?

The Joe Rogan Experience launched a decade ago, in an informal tone, almost a conversation between two close friends replete with inside jokes and private moments. As it evolved over the years, spanning 1,000-plus episodes, that same format—one he personally emphasised as “listening and learning”—catapulted him to superstardom. Each episode spans anywhere from two to three hours, and Rogan owns an additional channel where clips of the long-form conversations are uploaded.

He criticised feminism and bemoaned the destructive nature of "identity politics". He lashed out against the lying politicians and the fraudulent 'left-right' political systems, he listened enthusiastically, patiently (often agreeably) to every single guest on his show, and bashed mainstream media as “biased, agenda-driven and divisive”.

Rogan makes for an easy man to underestimate. He spoke openly about his own depth of ignorance on topics, and if a guest delved into topics that he did not fully understand, he made no pretence about it.

For his disaffected male viewers, Rogan was nothing less than a cult guru—an internet father figure who told sternly told them to clean up their act, work out, keep themselves fit for life's challenges, and embrace “personal responsibility” as their lord and saviour.

If on one day Rogan listened patiently to a guest on his show claiming that earth was flat and that interdimensional child molesters were on the prowl, the next day he would listen wide-eyed to the Many Worlds Theory and the intricacies of quantum physics with Caltech Professor Sean Carroll. The same malleability is a feature that defines most of his audience. And this is what makes Joe Rogan one of the hottest internet commodities on the face of the earth. For the advertisers, Rogan commanded an army of ultra-loyal young viewers; for the politicians, there was a unique, open-minded demography—ones who defined their ideology as 'Joe Rogan's politics'—that they could, with the right amount of convincing, "reprogram to their wavelength".

He was a rare internet phenomenon, at once a man that existed on the fringes (hosting nutcases, avid conspiracy theorists and controversial personalities who have largedly been purged from the mainstream) and a pop culture figure so massive in his influence that even powerful political personalities did not dare ignore him.

In 2019, US presidential candidate Andrew Yang, then a marginal figure, credited an appearance in Rogan's podcast with a massive surge in popularity and fundraising. “After the appearance in the Joe Rogan podcast,” said an aide of Yang, “everything went right.”

US presidential candidate Tulsi Gabbard is a frequent guest in his podcast.

Rogan himself has said that he has turned down requests from presidential candidates lke Pete Buttigieg, Elizabeth Warren and Joe Biden to appear on the show.

One of the most telling moments of 2019 was the then US presidential candidate frontrunner Bernie Sanders made an appearance on his podcast (it currently has around 12 million views on YouTube). In a subsequent show, Rogan indirectly spoke about his support for Sanders and that he would vote for him; the Sanders campaign shared a clipping of the “endorsement” on all their social media platforms.

He is also a highly controversial figure. When Sanders touted Rogan's endorsement, he faced a lot of backlash; several trans-rights groups came out against Joe Rogan and Bernie Sanders, decrying the former's previous comments on transgender athletes. Commentators dubbed Rogan as an “influential bigot who should be marginalised”. He has been called everything from a purveyor of toxic masculinity to a white nationalist and a racism enabler. He has addressed most of the criticism on his shows, explaining that his politics was to the "left of centre" and that he was a supporter of policies ranging from universal healthcare to free college education.

Rogan has faced backlash for hosting right-wing provocateurs like Milo Yiannopoulos and Alex Jones—the latter being a conspiracy theorist extraordinaire who is most famous for ranting about government adding chemicals to water that is “turning frogs gay”. Alex Jones had faced trouble when he claimed that Sandy Hook massacre—when 20 children in an elementary school were shot dead by a gun-wielding assailant—was a “hoax”. He had faced multiple lawsuits for that.

There is another dimension to the YouTube-Spotify switch. Several commentators have argued (though not Rogan himself) that there is a political implication to Rogan's jump. He has often railed against the big tech companies—Google (which owns YouTube), Facebook, Twitter—for kowtowing to political pressure and deplatforming voices (often conservative or right-leaning) from their sites, something US president Donald Trump himself has complained about in one of his tweets.

“They’re scrambling for control. They want to control the way people communicate. And they also want to make a profit. See part of this is they’re incentivising people to do shows that they can profit off of. So if you have a show that has no bad language, if you have a show that has no controversial topics, those shows are more appealing to advertisers. So for them, as a business, they’ll look at someone like me and say, ‘Well this is a limited advertisers option’,” Rogan said.

British journalist Guy Birchall wrote in Russia Times that Rogan leaving the platform should come as a wake-up call to YouTube.

“Along with apparently penalising “wrong thinking” content creators, YouTube has also made the decision to prioritise what it calls “authoritative sources”. This has seen it bias its algorithms in favour of mainstream news outlets, such as CNN, the BBC and Fox News, ahead of creators who have made their name on the site itself. The move seems to be an attempt by Google to cosy up to liberal-leaning legacy media for reasons of corporate vanity. However, it has angered content creators on the platform who helped build the site’s popularity, and annoyed viewers, many of whom visit YouTube expressly to get away from the MSM," Birchall wrote.

But, those arguments might not hold water. While the full show will remain a Spotify exclusive, Rogan is still expected to post clips of his show on YouTube. In a later podcast, he had come out and addressed the reasons for jumping ship to Spotify; he said "Spotify was a great company to be associated with" and that, while he still disagreed with a lot of YouTube actions, he was certainly not going to war with the tech companies.

What the future holds for the podcasting industry, Joe Rogan, Spotify and YouTube remains to be seen. For now, only one thing is for sure. A media revolution is on the horizon, and it sure as hell will be televised.