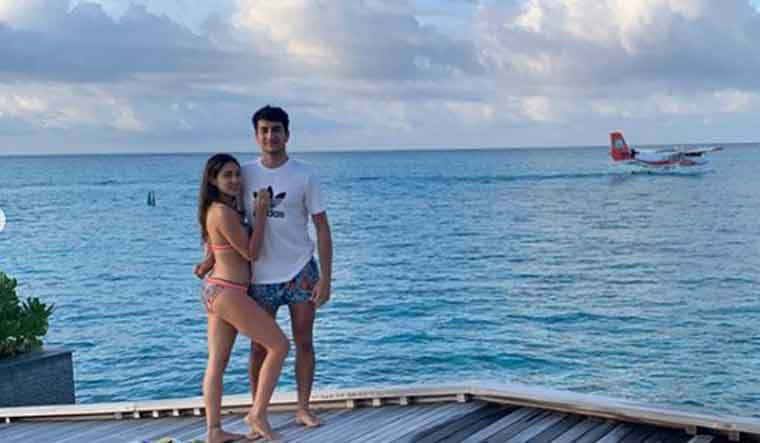 Sara Ali Khan just found herself on the receiving end of social media hatred after she posted a birthday wish for brother Ibrahim Ali Khan, along with a picture. It is this picture from their recent Maldives vacation that has irked trolls. Sara picked out two photos from the trip for an adorable birthday wish for Ibrahim. "Happiest birthday, brother. I love you more than you know and am missing you lots today! Wish I was with you," read her post.

In one of the pictures, Sara poses in a bikini with Ibrahim. It is not the beachwear that social media users don't approve of, but Sara's posture. Netizens felt it was inappropriate to pose in such a manner with her sibling, and many pointed out that it was evident Ibrahim was uncomfortable. Some of them commented that his body language, particularly the posture of his hand revealed his discomfort.

Happiest birthday Brother 🎂 🍰 🎁👫 I love you more than you know and am missing you lots today!! Wish I was with you 🤗 #tbt @ncstravels @luxnorthmale

While one of the users blamed it on 'inadequate parenting', there are others who said it was stardom that brought her to this. Making matters worse, some users have even brought in the religion angle. One of the users commented she must change her religion and name as she was bringing shame onto Islam. In the midst of all this, there were many others who supported her and hit out at the trolls. Defending her, another user wrote: “People see I am a Muslim and as a Muslim, we don't have any freaking rights to degrade someone you can't just bring a religion up for that. It's her life her choice so stop spreading hatred and stop writing shits(sic).”

Sara and Ibrahim were on a week-long vacation in Maldives with their mother Amrita Singh at the beginning of this year.