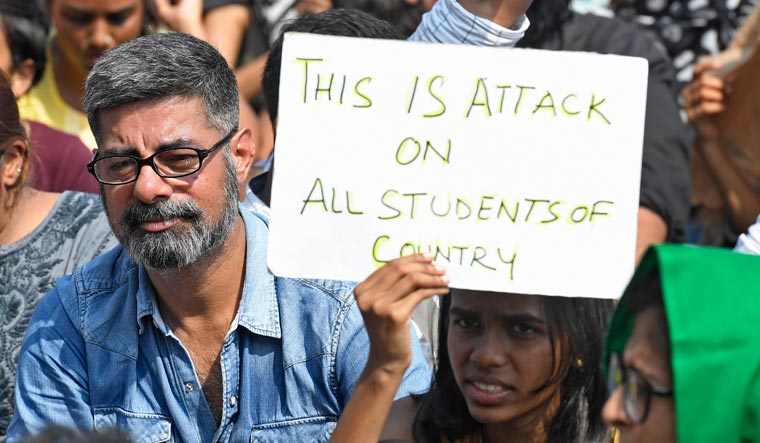 "Horrifying", "heartbreaking" and "barbaric" is how many in the film industry, including actors-filmmakers Anil Kapoor, Alia Bhatt, Rajkummar Rao, Twinkle Khanna, Anurag Kashyap and Sonam Kapoor Ahuja, described the Sunday night violence at the Jawaharlal Nehru University while demanding that the perpetrators are brought to justice.

Violence broke out at the JNU on Sunday night as masked men armed with sticks and rods attacked students and teachers and damaged property on the campus, prompting the administration to call in police which conducted a flag march.

At least 28 people, including JNU Students' Union president Aishe Ghosh, were injured as chaos reigned on the campus for nearly two hours.

Anil Kapoor said he was shocked and couldn't sleep last night after watching the disturbing visuals of the attack.

It has to be condemned. It was quite sad, shocking, what I saw. It was very disturbing. I couldn't sleep the entire night, thinking what has happened. It has to be condemned. Nothing will come out of violence. Whoever did this, they should be punished absolutely," he told reporters at the trailer launch of Malang in Mumbai.

Actor Aditya Roy Kapur, who also features in the film, added, "There's no place for that kind of violence in our country, the perpetrators have to be brought to task, definitely."

Alia Bhatt said it is time to "strongly oppose any ideology that seeks to divide, oppress and promote violence".

"When students, teachers and peaceful civilians become victims of physical assault on an ongoing basis, it is time to stop pretending that all is fine.

"We must look truth in the eye and acknowledge that we are a house at war with itself. We, the people, of this country no matter how diff our ideologies, must find a human solution to all of our complex problems, and reinforce the peaceful and inclusive ideals upon which this country was built," the actor posted on Instagram Stories.

"Shocking disgusting and cowardly. Have the b**** to at least show your face when you want to attack innocents," Sonam Kapoor wrote on Twitter.

Kashyap, who has been posting videos of what went inside the JNU campus, wrote, "Hindutva terrorism is now totally out there. #JNUSU."

Rajkummar called the attack on students and teachers "heartbreaking".

"What happened in #JNU is shameful, horrific and heartbreaking. Those who are responsible behind these attacks should be punished. #JNUViolence," he tweeted.

Taking a jibe at the government, Twinkle said cows were safer in the country than students.

"India, where cows seem to receive more protection than students, is also a country that now refuses to be cowed down. You can't oppress people with violence-there will be more protests,more strikes,more people on the street," she tweeted.

"Absolute truth. Watching news last night it felt exactly like we are reliving 26/11," she tweeted.

Actor Adil Hussain said brutality is not a solution to any problem.

"If brutality is the solution to any problem then world would have been at peace already! Brutally, even delivered, in the name of official justice system is a quick-fix, not a solution. Heartbreaking to see students are being brutalised in Delhi. Must find another way with love," Hussain wrote.

"It breaks my heart to see what happened at JNU! What's going on in India is horrifying!! Students and teachers being beaten up and terrorised by masked cowards!! The constant blame game!Stooping so low for political agendas! Violence is NEVER a solution! How have we become so inhuman?" she said.

Filmmaker Alankrita Shrivastava wrote, "A democratically elected government in a functioning democracy is accountable to the people. Who from the government is taking responsibility for the violent attacks on students? Who is going to resign?"

Director-writer Reema Kagti tweeted, "I stand with the students and people of India. Shame on the government of India for their brutality and barbarism. #JNU #AMU #Jamiya #NoToNRC #NoToCAA."

"Dear celebrities. It is understandable that opening your heart out and being vocal on a public platform entails a great risk for you and your career. But remember the millennials who form your major audience are speaking up vociferously. Your voice matters to them," he tweeted.

Swara, whose mother Ira Bhaskar is a professor at the JNU, took to Twitter on Sunday night to appeal to the people on social media to reach the campus "to pressure the government and Delhi Police" to control the violence.

She later tweeted, "My mom is safe. JNU is peaceful for now & the gates are open! Eternal gratitude to the citizen protestors of Delhi who showed up at JNU main gate earlier tonight- you saved JNU! Thanks to the media and reporters who risked their own safety & showed us what terror was unleashed today."

Azmi said she was shocked by the violence and called for immediate action against the perpetrators.

"Is this really happening? I'm not in India and it all seems like a nightmare... Reprehensible, appalling condemnable. Immediate action must be taken against the perpetrators," she tweeted.

Actor Richa Chadha said: "Name and shame them. If the cops don't act, if the authorities vie to make them ministers, it is we must act. Name and shame these aggressors and goons. They shouldn't be getting jobs or degrees."