Kuhad connects with audiences across demographics and countries 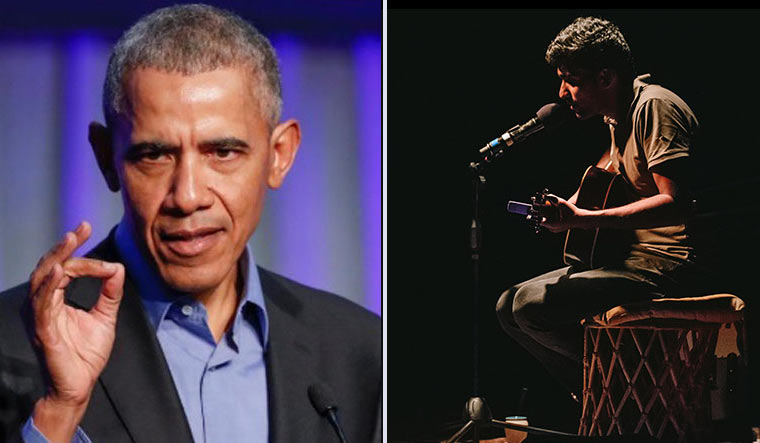 In September this year, just a few days before taking off on a 30-city concert tour across three continents, singer-songwriter Prateek Kuhad seemed worried about imprecise algorithms in music streaming platforms which tend to pair up and suggest artists according to ethnicity and listener base.

“If you listen to Arijit Singh, you will get me as a music suggestion which I think is less accurate than, say, if you are listening to [American singer-songwriter] John Mayer. My music is relatively more similar to his,” Kuhad said in an interview with THE WEEK.

When his successful run of 30 shows in the US, Europe and India ended in Delhi on December 22, Kuhad found a completely unexpected person for a fan, defying perceptions that millennials alone were his core base. Former American president Barack Obama, on December 30 released his favourite music of 2019, a list of 35 songs that included tracks from the likes of Beyonce, Frank Ocean, Lizzo, Kaytranada, Solange and Maggie Rogers.

From hip-hop to country to The Boss, here are my songs of the year. If you’re looking for something to keep you company on a long drive or help you turn up a workout, I hope there’s a track or two in here that does the trick. pic.twitter.com/mQ2VssyDwt

Fans in India erupted into a social media frenzy to find the title track from Prateek’s 2018 EP, ‘cold/mess’ in the same list. The cosmopolitan overtone and aesthetic of his music—that Kuhad stressed earlier—couldn't have been overlooked by a discerning listener.

"Part of the story that was most compelling for me was that Prateek’s music really does defy any cultural assumptions people may have about music coming out of India—his music is as straight singer-songwriter as you get, and yet uniquely Prateek at the same time," says Nicole Barsalona, Kuhad’s American manager and architect behind the singer-songwriter’s greater visibility in the international market.

She first met Kuhad at the 2016 South by Southwest (SXSW) music conference in Austin where NPR had listed him as one of the 100 artists to watch out for at the gathering. She fell in love with his style of music after she heard songs from his debut album 'In Tokens and Charms'. Barsalona immediately reached out to Kuhad and his then-manager Dhruv Singh to find out if they had a representation in the US and began to chalk out his international strategy to introduce Kuhad to a larger audience.

"The biggest challenge back in 2017-2018, when we were introducing Prateek to audiences in the US, was making sure people didn’t assume the music was ‘world music’ when they heard he was from India before listening to it," says Barsalona about Prateek's journey in the US where he is largely "indie" in a market dominated by major label artists.

"We started doing house concerts to just a handful of people in 2017, then I booked a test tour in a few markets last year to see if anyone would show up and we sold out every venue. This year, he played two major tours across the US and sold out legendary venues in San Francisco, Chicago, New York, Toronto, London, Amsterdam, and the list goes on," she says.

Kuhad now has an international team with sought-after experts from the US music industry, including his agent Tom Windish, who represents stars like Lorde, Diplo and Billie Eilish, among others, to Brooklyn-based public relations agency Shore Fire Media which The New York Observer dubbed as one of "the most powerful entertainment and media PR firms of 2018".

Now with Obama's validation, the possibilities for Kuhad, Barsalona believes, are endless.

Kuhad has cultivated a dedicated fan-following in the last six years. In 2012, he left his consultancy job in New York to pursue music full-time and returned to India when he saw how the independent music scene was growing here. After performing in clubs, headlining festivals, serenading colleges and smaller venues, it is only in the last two years that Kuhad has been packing larger, thousand-seater auditoriums in India. His current India manager, Anirudh Voleti, started off as his booking agent in 2015 and it was only after the release of the ‘cold/mess’ EP in 2018 that Voleti started looking after both management and bookings for Kuhad.

Having worked with OML and NH7 Weekender, he now works with the artist management agency Big Bad Wolf, which has represented Indian Ocean and Karsh Kale. Voleti knows Kuhad's music easily connects with the young and old. Even though the role of an artist manager has evolved in the last few years and social media as a marketing tool is of utmost importance, Voleti knows you can't lose sight of the basics.

“We have ensured Prateek continues to build a direct connect outside of the social platforms via his mailer base where they are sent regular updates ahead of public social announcements—from ticket announcements to tours, to videos,” says Voleti, stressing on a fan-first ideology where every activity around Kuhad is relayed first to the musician's mailer base before any social platform.

Not many singers in India have employed this strategy. Supermoon ft Prateek Kuhad Winter Tour 2019 in India spanning 11 cities has been Kuhad's most successful concert tour with close to 30,000 ticket buyers—“a number almost unheard of for an independent artist,” says Voleti.

So between the internet, social media, world tours, music streaming sites and a team of managers with full faith in Kuhad's music, is it any surprise that Obama lent his ears to a brilliant singer-songwriter?