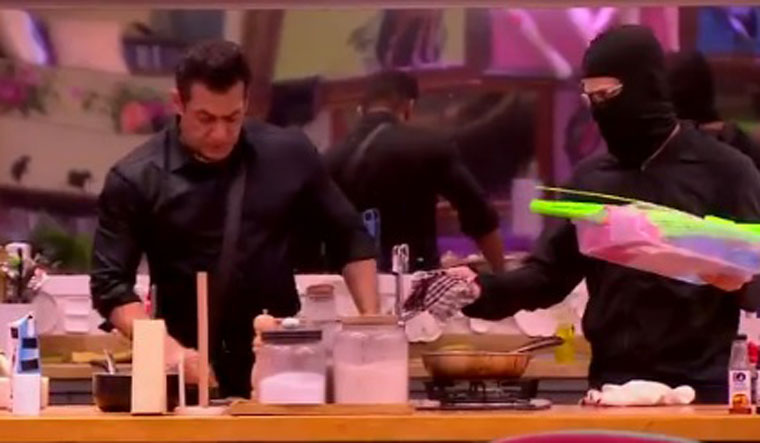 Salman Khan seen cleaning the kitchen in the promo video

Bigg Boss 13 contestants got the shock of their lives, if the new promo for the upcoming episode of the reality TV show is anything to go by. The show's host Salman Khan, along with two helpers, entered the Bigg Boss house and started cleaning the mess left by the housemates after they decided not to follow the instructions given by captain Shehnaaz Gill.

In the promo video posted on the social media platforms of Bigg Boss for tonight's episode, Salman is seen entering the house with two helpers and goes on to wipe the kitchen counter, wash the utensils and even clean the toilets. At one point, he is seen picking up a ball of hair from the washroom and disposing it off in the garbage bin.

The contestants, meanwhile, are locked in the room with glass walls and are shouting “sorry” to Salman. As they stand in embarrassment and apologise, they also ask him not to clean up the mess that they have created.

Later, when Salman talks to the housemates via MiTV, the contestants continue to say sorry, to which the host asks, “Sorry for what?” He tells them that no one in the Bigg Boss house has any shame, as they think they are some kind of big shot. Salman reminds them that people are watching their shameful behaviour.

Shehnaaz, who won the captaincy task, has faced a lot of resistance from the other contestants as they refuse to follow her instructions. The other housemates have also refused to do the duties assigned to them by Shehnaaz, thereby creating many a mess in the kitchen and bathrooms of the house. This apathetic behaviour finally forces Salman Khan to take matters into his own hands and he enters the house to make his point by cleaning up the mess.

This is the first time in the history of the reality TV show that the host has entered the Bigg Boss house to clean the mess left by the contestants.