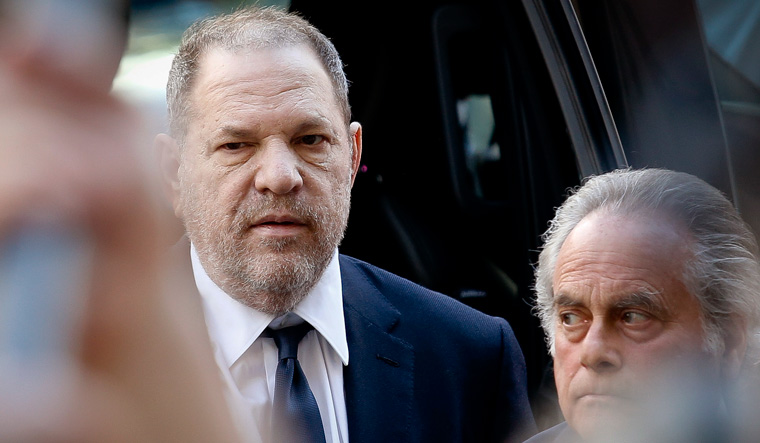 Harvey Weinstein, left, arrives with his lawyer Benjamin Brahman for his arraignment at Manhattan's Criminal Court in New York | AP

The untold story behind the sexual harassment allegations against Hollywood producer Harvey Weinstein, which sparked the global #MeToo movement against sexual misconduct, will fill the pages of a new book.

Published by Bloomsbury, She Said: Breaking the Sexual Harassment Story that Helped Ignite a Movement is written by New York Times reporters Jodi Kantor and Megan Twohey who were later awarded the Pulitzer Prize for the story.

On October 5, 2017, the New York Times published an article by the two reporters uncovering sexual abuse allegations against Harvey Weinstein. The story subsequently inspired a global campaign against sexual harassment and assault as women across the spectrum opened up and shared their stories about abuse by men in positions of power.

"The book relives in real-time what it took to break the story and gives an up-close portrait of the forces they were up against. They describe the experiences of the women who spoke up - for the sake of other women, for future generations, and for themselves," the publisher said in a statement.

The detailed investigation that led to breaking of the story, Kantor and Twohey, the book reveals, had been having confidential discussions with top actresses, former Weinstein employees and other sources, learning of disturbing, long-buried cases.

"The journalists meticulously picked their way through a web of decades-old secret payouts and non-disclosure agreements, pressed some of the most famous women in the world - and some unknown ones - to risk going on the record, and faced down Weinstein, his team of high-priced defenders, and even his private investigators," they said.

A testament to the power of journalism and how facts can drive social change, the book, "important, thrilling, and full of new discoveries", provides startling new details on the specific ways by which the victims were silenced, while illuminating the crucial roles that powerful lawyers and private investigators play in this silencing that continues today.

"Kantor and Twohey take us deep into Weinstein's company and its stunning complicity in his alleged abuse, take readers behind-the-scenes as they convinced key sources to go on the record and participated in a dramatic final showdown between Weinstein and the New York Times," it added.