Reinforcing prejudices: Everything that is wrong with 'Game of Thrones'

The show may be reinforcing existing racial, cultural and geographical stereotypes 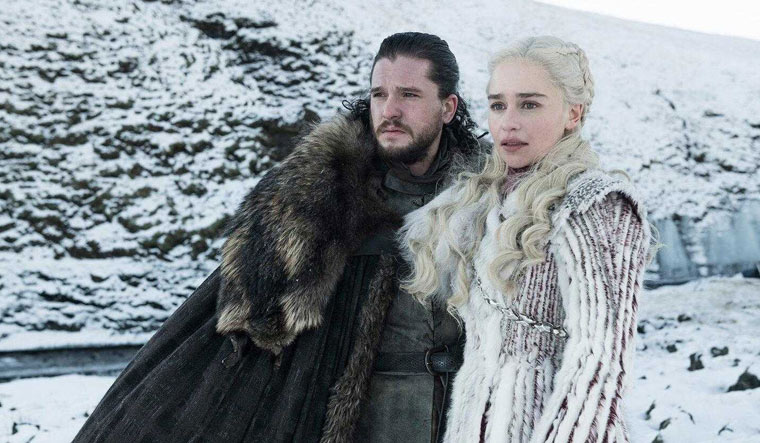 The fictional world of the popular TV series Game of Thrones may be reinforcing the existing racial, cultural and geographical stereotypes that have been part of the Western imagination of the East for centuries, a study suggests.

Game of Thrones, based on American author George R.R. Martin's series A Song of Ice and Fire, has a reputation of being a ground-breaking portal of escape to an imaginary realm.

However, Martin's depiction of Eastern people is not far removed from older narratives, according to the study published in the Canadian Review of American Studies.

In his study, Mat Hardy, Senior Lecturer at Deakin University in Australia, cited examples from the storyline of Daenerys Targaryen, the heir to the Iron Throne—a white Westerner who navigates the perils of the Eastern lands to claim her birthright.

"There is little ambiguity in the naming of the two continents that feature in the books and the TV series," Hardy said.

Westeros is the principal location for most plot arcs. To the East lies Essos, which is chiefly used as a kind of quarantine zone for the development of Daenerys' story. It serves as a far-away land where she is relatively safe, while advancing her character arc.

To build her army, Daenerys frees thousands of dark-skinned slave soldiers known as the Unsullied, and wins over the Dothraki, a nomadic tribe of horsemen portrayed to lead a barbaric lifestyle.

"The eastern narrative dropped the moment Daenerys moved to Westeros. The best indication of this is the fact that the opening credits changed and removed the Eastern portion of the map," Hardy told PTI in an email interview.

In the eighth and final season of the HBO series, the opening credits did away with the eastern continent of Essos and shifted focus to Westeros, as Hardy noted. "The gathering of the Dothraki and Unsullied were major plot points for four seasons but they were about Daenerys' development. Once she had these tools, she moved up a level of threat and leadership," he said.

"But the actual tools were now unimportant," he added.

In the third episode of the final season of Game of Thrones, that aired last week, the Dothraki were presumably wiped out by the army of the dead.

"The death of the Dothraki fits a standard plot device in Western media—as strength testers. If you want to show how tough the bad guy is, you need him to slaughter a ton of good guys. Enter the non-white cannon fodder," Hardy said.

In laying out their fantasy worlds, Western authors are inclined to reach for the same basic divisions that exist in the world.

"Inevitably to the north and west of these fictional maps lie snowy forests full of dour, uncomplicated, and noble warriors," Hardy wrote in the study.

In the series, the northern stronghold of Winterfell is perenially cold.

According to Hardy, the Northern and Western people—such as the Starks in Game of Thrones—are portrayed as more honest, more productive, and generally more positive than their Eastern counterparts.

"To the east and south, there are deserts, steppes, and wastelands full of crafty nomads, duplicitous petty rulers, slavers, and evil magicians," Hardy wrote.

Daenerys is shown to overcome the wickedness of the East—imposing her own ideological interpretations upon them and proving her ability to lead.

Strong elements of the old colonial vision can be found in her actions—she is the white westerner as civiliser, improver and breaker of unpalatable or primitive customs.

Daenerys stamps her more liberal and implicitly Western values across the continent of Essos, even though things do not always lead towards desirable outcomes.

Her liberation of the slave cities—Yunkai, Astapor and Mereen—provokes resistance to change, rebellion, and then inexorable regression into barbarism, sectarianism, and squalor when she departs.

The idea that Eastern peoples are unable to govern themselves without a stern white parent taking the heavy and thankless task of overseeing them was a standard Western belief of imperial times, according to the study.

Another example from the show is fair-skinned Arya Stark's training in the Eastern city of Braavos. Hardy noted that this too is a reflection of how the West perceives Eastern martial arts in the real world.

"The western fascination with martial arts mastery is also a fairly standard fantasy element. You pop off to a monastery for a few years and come back as a lethal dealer of death. It doesn't even have to be explained to an audience. They just accept it as standard," Hardy said.

Hardy, who teaches Middle East Studies, wants people to question their assumptions about the Middle East and its people.

"Central to this is making them realise where their assumptions have come from and what cultural relativism they are bringing to the table," Hardy told PTI.

"Examining popular media is part of this and it is easy for students to identify problems with the depiction of real world locations and people. But I want them to understand that even if they are watching a TV show that is not set in our own world, the same Orientalist stereotypes are still there," he said.

"Western fantasy authors are lazy when they draw up their maps and global cultures and an endemic Euro-centric imagination prevails. People need to be aware of that," he added.