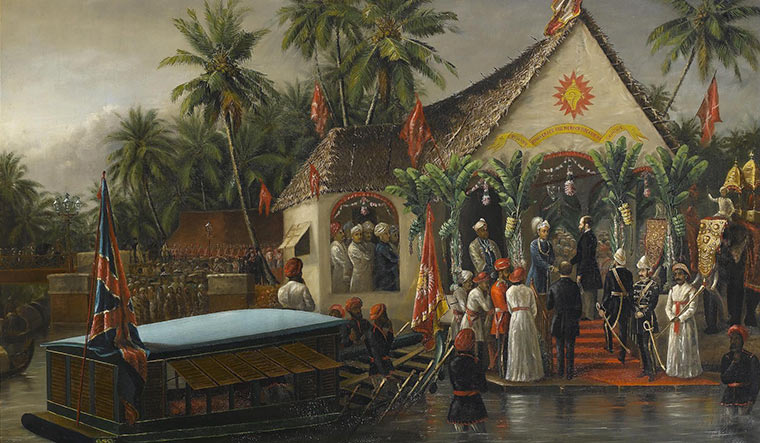 A rare painting by Raja Ravi Varma, which depicts the maharaja of Travancore welcoming British administrators, has been sold for Rs 16 crore. The auction was conducted by Mumbai-based Saffronart, on behalf of the income tax department.

The 1881 oil painting was part of fugitive jeweller Nirav Modi's art collection seized by the IT department. It depicts Rama Varma maharajah and his younger brother welcoming Richard Temple-Grenville, and Chandos, the third duke of Buckingham, and the governor general of Madras. According to information on the Saffronart website, Ravi Varma was invited to document the historic event. It is highly likely that the event took place at the Vallakadavu Boathouse, built in the 1820s and served as an important waterway hub for travel and movement of cargo during the Travancore era.

The work was gifted to the Duke, and after his death, passed on to his eldest daughter Baroness Kinloss. In the 1920s, it became a part of Castle House, Buckingham and remained there until 1974 when a private collector acquired it.

An untitled work by the abstract artist V.S. Gaitonde fetched a winning bid of Rs 25.24 crore, including the buyer's premium. As many as 68 artworks went under the hammer after a special court allowed the enforcement agencies to sell the paintings and 11 luxury vehicles owned by Nirav Modi, to recover dues.