iD’s business from e-commerce has grown by 10 times since the pandemic: Musthafa 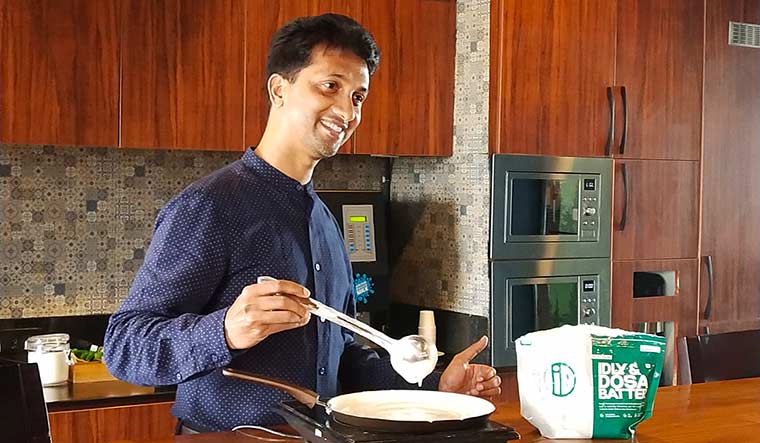 Ready-to-cook product company iD Fresh Food has no plans to slow down. The Bengaluru-based company, whose name has become synonymous with the dosa-idli batter that it brings to stores, is well-poised for an aggressive phase of growth as the company looks to add more products with a longer shelf life, in addition to geographic expansion plans.

"Our focus will be to add more products with freshness as a take on it", P.C. Musthafa, co-founder and CEO, iD Fresh Food, tells THE WEEK.

The 16-year-old company has an impressive strike rate, despite the pandemic-induced blues. The business from e-commerce has grown by 10 times since the pandemic and has evolved into a large channel for the company. Before COVID-19 struck, the sales from its e-commerce arm accounted for only 3-4 per cent of the revenue; but, has since grown to 15 per cent.

The profitable, zero-debt start-up that adheres to its motto of “never borrowed and never will” is currently in the process of raising funds. Naturally, the million-dollar question is whether an IPO is on the cards for iD Fresh. “Until a couple of weeks ago, I was against it. But now, I’m seriously evaluating the possibilities of a public issue. Nothing is certain for now though,” Musthafa says.

The company, Musthafa says, converted every challenge into an opportunity. The best testimony to this is the fact that retail sales, especially online, grew manifold after the pandemic. E-commerce sales comprised Rs 60 lakh per month in March, while it grew to Rs 6 crore per month in the current quarter.

In the first wave, many large shops were closed, while most kirana stores managed through. However, the second wave had hit the large and small stores alike. “While sales in kirana stores or grocery trade are getting back to pre-Covid level, modern retail shops are witnessing a slow recovery, while institutional shops are yet to recover,” Musthafa noted. That’s where the e-commerce game plan has brought about a much-desired change for the food tech company.

Currently, the company produces enough batter to make 1.5 million idlis every single day. The staple South Indian breakfast dish comprises 30-35 per cent of iD's revenue, while parottas--at 9 lakh numbers per day--accounts for 37 per cent of the current revenue. Parottas have overtaken the batter category in terms of the revenue it generates.

The company believes in “no preservatives and no chemicals”. “Fresh sells. We keep the products fresh," Musthafa emphasises, adding that 90 per cent of iD’s products get sold on Day 1 itself.

According to him, the biggest victory of the company was identifying that Indian customers consider products with shorter shelf-life to be healthier. “We understood the customer mindset that motivated us to play with ideal shelf-life to bring to market the right products for Indian homes," Musthafa says.

iD focused on the basics--it identified a niche and focused on e-commerce. That was the success mantra. "We learned to do more with less by cutting down the distribution. We had close to 50 per cent revenue growth in just the last 15-18 months as people became more health-conscious and there was more acceptance for healthy food and lifestyle," he says.

Founded by Musthafa and his cousins in 2005-06, iD Fresh has now an entire gamut of fresh food and beverage items, including filter coffee liquid, tender coconut, grated coconut, paneer, and curd, among others.

“We started selling paneer three to four years ago. This month our turnover from paneer alone was Rs 4.5 crore,” Musthafa says. Similarly, curd, which was introduced later, brings in about Rs 2 crore in revenue per month. “This gives us more confidence to get into more clean-labelled products,” he adds.

iD Fresh has more than 30,000 outlets across 45 cities in India, the UAE and the US. Cashing in on the massive demand for its products, iD Fresh is eyeing aggressive expansions to international markets. The UAE, which it ventured into seven years ago, has grown to become its uno numero market in terms of revenue at Rs 100 crore per year. iD Fresh has set shop in Oman recently and is starting soon in Saudi Arabia, Bahrain, Kuwait and Qatar.

The company, which has an idli batter factory each in Bengaluru, Mumbai, Hyderabad, and Dubai, is planning to start three facilities in the US. It has tied up with a team in the US for the same and should be operational this financial year.

In addition, Musthafa & Co is also eyeing Singapore, Indonesia, and Malaysia for expansion.