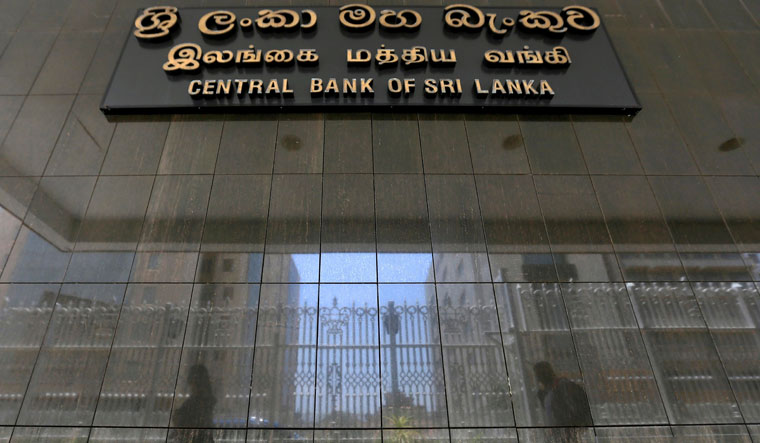 Its GDP contracted by a record 3.6 percent in 2020 and its foreign exchange reserves plunged by over a half in one year through July to just USD 2.8 billion. This has led to a 9 percent depreciation of the Sri Lankan rupee against the dollar over the past one year, making imports more expensive.

Meanwhile, the Central Bank of Sri Lanka Governor Weligamage Don Lakshman, who took up the post in December 2019, said he would resign following the country's weak foreign exchange reserves have limited its ability to import goods and raised the risk of default. The announcement comes with bonds at nearly half their face value, debt-to-gross domestic product (GDP) levels exceeding 100 percent, more than 80 percent of government revenues going on interest payments alone and foreign exchange reserves dropping to less than two months import cover in July.

Finance minister Basil Rajapaksa told the Parliament on 7 September that Sri Lanka was facing a severe external crisis as well as a domestic crisis with revenues falling and expenses continuing to rise. He said state coffers, which heavily depends on tourism and tea exports, suffered huge revenue losses due to the COVID-19 outbreak.

"Due to COVID-19, the government's revenue so far for this year has fallen between 1500-1600 billion rupees from the estimated amount, the younger brother of President Gotabaya Rajapaksa and Prime Minister Mahinda Rajapaksa, told the House.

The government also faces accusations that it was printing money to keep interest rates low.

Rajapaksa said the revenues from customs had fallen sharply. The main source of government income has been from vehicle imports, he said. We have banned importing vehicles for the past one and half years.

He said the pandemic lockdowns caused reduced Excise Department and Value Added Tax from the Department of Inland Revenue. "Because of difficulties in finding foreign exchange. So the revenue from the customs dropped to a low level this year," he said.

When there is a lockdown, the revenue from direct and indirect taxes reduced by 75-80 per cent on a daily basis, the finance minister said.

From the expenditure side, the government spending has increased because we did not cut any allowances or salaries of state sector employees.

FM said the external sector is also facing a similar crisis. The drop in tourism revenue could be between USD 4 to 5 billion. He said the government had paid for 80 per cent of the COVID-19 vaccines so far.