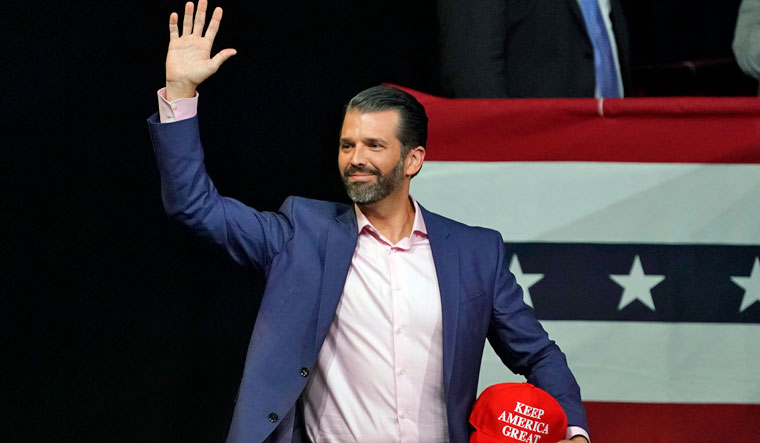 The Trump Organization is bullish on the Indian real estate, which is its biggest residential market outside the North America, its Executive Vice-President Donald Trump Jr. said on Saturday.

New York-based The Trump Organization, which is a venture of former US President Donald Trump, entered into Indian real estate market through a partnership with Mumbai-based Tribeca Developers.

The US firm and Tribeca have tied up with local developers, including the Lodha group, to build luxury projects under 'Trump' brand. So far, four luxury projects have been announced, of which one in Pune is already complete.

"I have been bullish on the (Indian) market for a long time," Donald Trump Jr said when asked about his future projects in India.

He was appearing as a guest in a talk show with Kalpesh Mehta, the founder of Tribeca Developers, being organised by Alchemist.

Trump Jr did not disclose about the company's future projects in India.

The Trump Organization and its India partner are developing luxury residential properties of global quality and standards, he said.

Amid the global pandemic COVID-19, Trump Jr said there has been a "dynamic shift" in real estate globally, especially in the office market because of work from home and remotely.

He said one has to see how it plays out post-pandemic.

When asked about the current market scenario, Mehta said the Indian real estate sector was reviving after the first wave of the COVID-19 pandemic but the recovery process has taken a hit because of this second wave.

Maharashtra property markets had a strong recovery compared to the other markets, he said.

Mehta said the real estate market will see a sharp growth once the pandemic gets over.

In India, The Trump Organization has already completed a luxury project in Pune partnering with Panchshil Realty.

It tied up with Lodha group in 2014 for housing project in Mumbai which is currently under construction.

In November 2017, Trump Tower was launched in Kolkata comprising 140 ultra-luxury apartments and being developed by Unimark Group, RDB Group and Tribeca Developers.

The fourth housing project at Gurugram, Haryana, launched in 2018, is being developed by realty firm M3M.

Besides Trump Towers, Tribeca is independently developing few projects in partnership with other builders.