In a time of lockdowns, can the digital release of Radhe revamp the TVoD business? 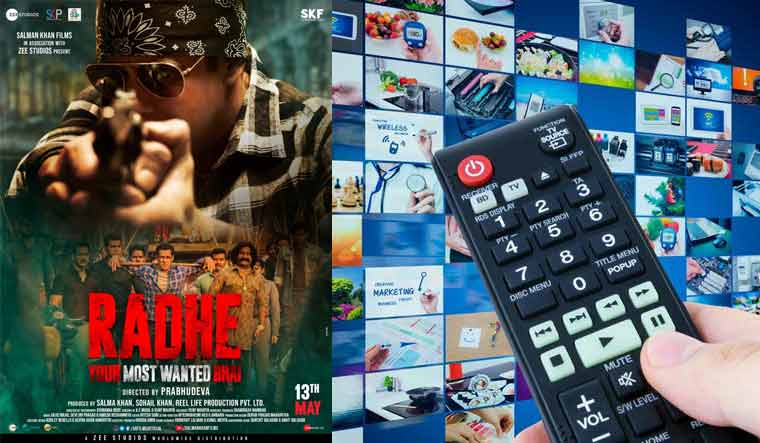 Be it video on demand or pay-per-view, these distribution systems have yet to take despite having been talked about in the media and entertainment (M&E) industry for a long time.

With the coming release of Salman Khan's Radhe in both theatres (with options reducing as more states enact lockdowns and restrictions) and via transactional video-on-demand (TVoD), can Bhai's blockbuster push be just what the industry needs?

“Radhe has been the most awaited film of the year. It will be the first Bollywood film to simultaneously release in multiple formats worldwide,” says Shariq Patel, a chief business officer of Zee Studios, the producers of the film.

This means that the film will be available for streaming on payment of Rs 249 through not just the producer’s own OTT platform ZEE5, but also through distribution partners like Dish TV, D2H, Tata Sky and Airtel Digital TV. The operators have multiple payment options ranging from wallets to missed calls to WhatsApp bookings. “We already have very strong advanced bookings,” Patel told THE WEEK on Saturday.

Cinema halls across the country have been out of action since March of 2020—there was a brief respite of a few months in between when rules were relaxed, but theatres found the going tough having been limited to 50 per cent occupancy, lack of big releases and low interest from patrons.

While a few big films did get released theatrically in the gap in between and performed well—most notably Tamil superstar Vijay’s Master in January this year, most big production houses and stars have been on a wait-and-watch mode. Some released their films direct on OTT in the meanwhile, notably Akshay Kumar and Sanjay Dutt.

But going the pay-per-view or TVoD mode seems to be a post-lockdown reality, and a step ahead of direct-to-OTT releases. But the billion-dollar question is this—will this finally make this a viable proposition?

With a virulent second wave on and fears of a third wave down the road, the stakes are high for the future of Bollywood, and the overall M&E industry in the country. “Necessity was the mother of invention,” confesses Patel, adding, “The formula wasn’t needed before, and thus not consistently tried before. When the new environment closed a lot of entertainment options, it also forced us to think of newer ones.”

TVoD and pay-per-view have been mulled over and talked about for a long time in India, though it never really took hold in the mainstream. The advent of Direct-to-home (DTH) as the primary mode of television transmission in the country last decade offered a lot of scope.

Most infamously back in 2012, when southern idol Kamal Haasan tried to release his big-budget film Viswaroopam on pay-per-view. Haasan planned to charge Rs 1,000 on a pay-per-view basis through DTH for a single show some eight hours before the film came out in cinema halls. However, massive pushback from the powerful theatre owners and distributors lobby meant Haasan had to backtrack.

The pandemic realities brought video-on-demand back on the table. ShemarooMe, the OTT platform of the movie catalogue biggie Shemaroo, was one of the first to try it back in end-July 2020, its offerings being a mix of Bollywood, offbeat and regional cinema. The rates ranged from Rs 79-100.

“Viewers are constantly looking for entertaining content to make their stay at home engaging and entertaining,” argues Hiren Gada, CEO, Shemaroo Entertainment. “Through the TVoD model, the idea is to bring the ease and comfort of direct to digital viewing to the Indian audiences.”

Others who tried it include telecom operator Vi which introduced on-demand services in collaboration with Hungama. While Sony LIV offered WWE wrestling on pay-per-view, BookMyShow had recently debuted many Oscar-nominated films of this year available on its TVoD model. Down south, Vijay Sethupathy’s Ka Pae Ranasingam was released on pay-per-view at Rs 199.

ZEE5 itself tried to squeeze some extra moolah out of its Ishaan Khattar-starrer ‘Khali Peeli’ last year after the film’s theatrical run got truncated due to coronavirus restrictions.

According to a report by business chamber FICCI, India’s video on demand market has “made a strong beginning’ last year. The pay-per-view model is hugely popular in the US and UK, and though YouTube offers movies on rent, the idea hasn’t caught on in India so far. Will Sallu blow away the reluctance with his "seeti maar"?

“Any new idea is met with resistance, but eventually, most people realise it’s necessary to look at the industry as a whole, especially in times like these where health and safety is the most critical issue people are facing,” argues Patel.

Gada of Shemaroo agrees, “It is very early days for TVoD in India (but) once established, it is definitely here to stay. TVoD will complement the unsurpassable experience of theatre viewing, and supplement the same in its absence, in the current scenario.”