Nearly 12% of global trade passes through the narrow canal 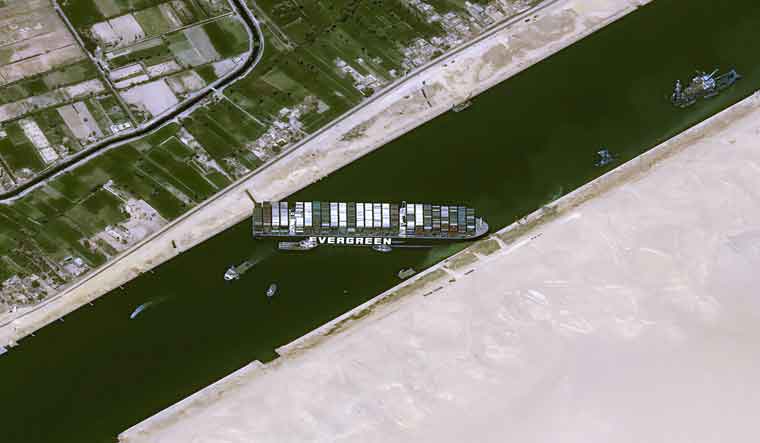 With the Suez Canal rescue mission to take longer than expected, it is a no-brainer that the event will have an adverse effect on global export trade. Estimates suggest that the blockade would cost global trade $6 billion to $10 billion a week. Global trade might take a hit of 0.2 to 0.4 percentage points annual trade growth per week if the Suez Canal traffic jam continues.

The fact that nearly 12 per cent of global trade passes through this narrow canal connecting the Mediterranean Sea to the Red Sea explains the significance of the passage. The canal provides the shortest sea link between Asia and Europe, and accounts for passage of around 30 per cent of global container shipping volumes.

If the logjam takes weeks to get resolved, global shipments will now have to be rerouted via the Cape of Good Hope, Africa's southernmost tip, and then to Europe. This route would increase the travel time by approximately two weeks.

The incident comes just as trade started to take off after global exports took a hit following the pandemic. It will further strain the segment that was reeling under container inventory shortages with experts warning about a spike in freight rates.

The export scenes in India are no different either. While India's trade scene has not taken a direct hit so far, it will also be pulled into the rabbit hole if the traffic snarl prolongs. In addition to hike in shipping rates, the blockage has the potential to curtail key manufacturing supplies.

However, the most overlooked aspect so far has been the impact of a prolonged blockage on fuel prices in India, which is already one of the highest in the world. India, more than two-thirds of whose crude comes from the Gulf region, is among the top importers of crude oil and products via the Suez Canal. The volume is even higher than China, South Korea or Singapore.

A prolonged blockade will see ramifications in India's crude oil sector, which has recently increased the imports from Latin America. The resultant impact will show up in the form of higher crude prices, eventually trickling down in retail price terms.

In addition, even if the blockage is removed soon and movement starts soon enough, the domino effect it will have will sustain for a while, experts fear.