Biswal noted climate change would be a key area of cooperation between India, US 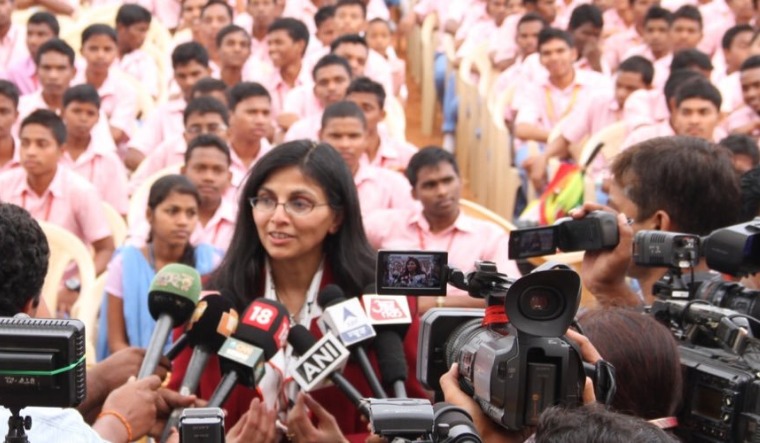 Asserting that the long-due US-India mini trade deal should be on top of the agenda of the incoming Joe Biden administration, US India Business Council president Nisha Desai Biswal has said that the ties between the two nations continued to be "strong and vibrant", and 2021 will provide important opportunities to broaden and deepen this partnership.

India and the US are negotiating a deal to iron out differences on trade issues to boost economic ties.

"The US-India relationship has continued to be strong and vibrant. That has been the case in the prior administration, in the current administration and I'm confident in the next one as well,” USIBC president Biswal told PTI in a year-end interview on Thursday, noting that the year 2020 started with the "strong and robust" visit of President Donald Trump to India.

Despite the fact that the US and India weren't able to see a mini trade deal launched, they did see that the robust strategic partnership was continuing to be advanced throughout the year, she said.

Be it the defence ties, close coordination between the US and India on regional and global challenges, the third 2+2 ministerial or further strengthening of the Quad grouping (India, the US, Japan and Australia) in the Indo-Pacific, the bilateral has continued to strengthen, Biswal noted.

"Unfortunately, we haven't seen the same level of progress on the trade front. That is something that both countries will need to reflect on... 2021, perhaps, (would) provide some important opportunities to broaden the US-India partnership, continue the deep strategic convergence and broaden the partnership to reflect on some additional areas of opportunity," she said.

Biswal, who in her capacity as assistant secretary of state for South and Central Asia was one of the prime drivers of the India-US ties during the second term of the Barack Obama administration, observed that the COVID-19 pandemic has underscored the importance that the two nations work together not only for the benefit of their own people but globally as well.

Climate change, one of the main focus areas of Biden, would be another key area of cooperation between India and the US in the next administration, she said.

Responding to a question, Biswal said while the two countries have not been able to advance the trade deal, they did made some significant progress on a number of policy issues, which support increased trade and investment in the US-India corridor.

This has been an important year for advancing a number of key economic reforms. However, it is unfortunate that the two nations were not able to sign the trade deal, despite having put a lot of time and efforts, she said.

Referring to the trade negotiations, Biswal praised the Indian side for coming to the table and looking to resolve some thorny issues like those related to medical devices or tariffs. Similarly, on the US side, she said there was a real desire to try to get it done.

"As time goes on, new issues emerge and then the expectations and the parameters that perhaps would have made the deal doable for one side are no longer the same as what the other side would need or wanted. That's unfortunate... there is a small basket of issues that could and should get resolved if not by the current administration at this point, then hopefully early into the Biden administration,” Biswal noted.

"(This is) not because it is so incredibly important or consequential… the small issues; they're very important and consequential to a few key sectors. But how do we approach the idea of a larger framework between our two countries, which we know is in our economic interest and in our strategic interest? How do we take that on if we cannot even come to closure on a small set of issues that should be relatively easier to find some gives and takes on?” Biswal said.

She hoped that this is something that the two governments after January 20, when Joe Biden takes oath as US president, can quickly try to put a lid on and say, "Okay, we got this done. Now, let's think about where we want to go in this relationship."

Biswal noted that there are a number of areas where the US and India should be focusing like services sector, electronics and technology and pharmaceuticals.

“I know agriculture is very difficult. And I don't necessarily think that has to be the first thing on the docket. I recognise the extreme sensitivity with which the reforms that were announced by the government are being met in terms of the social and political impact of those,” she said, referring to the farmers’ protests in India.

Observing that trade is hard and politically very challenging in democracies like India and the US, Biswal said the two countries do need to work together for the larger benefit of both of the economies to create more growth and opportunities for their citizens.

India, she said, is a very important partner for the US, both in terms of the bilateral agenda, and also because the two countries collaborate on a number of big global challenges, including free and open Indo-Pacific and climate security.