The rise of diesel: From Rs 12 cheaper than petrol in 2014 to becoming costlier

In a first, diesel price has surpassed petrol in Delhi after 18th straight hike 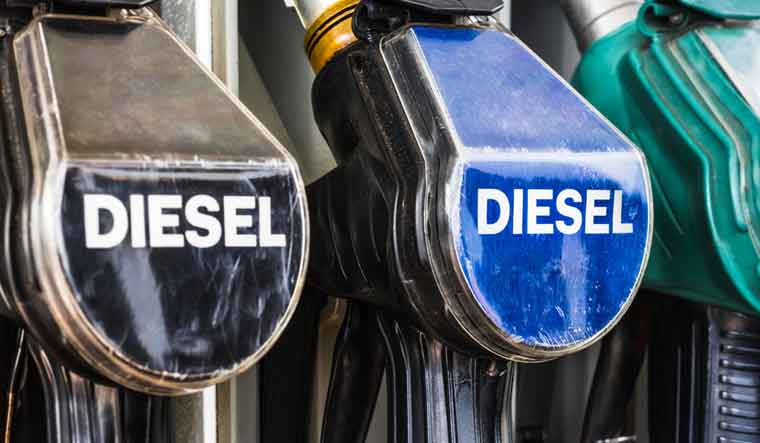 Traditionally, diesel was priced Rs 18-20 a litre lower than petrol due to lesser taxation | Shutterstock

For the first time in living memory, diesel price has surpassed the rate of petrol in Delhi on Wednesday when prices were raised for a record 18th day in a row. While there was no increase in petrol prices, the price of diesel was increased by 48 paise on Wednesday. As a result, diesel was retailing at Rs 79.88/litre, a tad higher than petrol at Rs 79.76/litre in the national capital.

However, diesel is costlier than petrol only in the national capital where the state government had raised local sales tax or VAT on the fuel sharply last month. Petrol costs Rs 86.54 a litre in Mumbai and diesel is priced at Rs 78.22. In Chennai, a litre of petrol comes for Rs 83.04 and diesel for Rs 77.17.

Traditionally, diesel was priced Rs 18-20 a litre lower than petrol due to lesser taxation. But over the years, the taxes have increased, narrowing the gap.

In June 2014, soon after the Narendra Modi government took charge in its first stint at the Centre, petrol and diesel were retailing at Rs 71.51 a litre and Rs 57.28 a litre respectively in Delhi. There was a price gap of Rs 12 between the two fuels at a time when the price of crude oil stood at $109.1 a barrel. Since then, the government has raised excise duty on the two products on 13 occasions while reducing it only twice.

Deregulation and daily revision of prices

Meanwhile, in October 2014, diesel prices were deregulated in India, linking them directly to the international market rates. Prior to the deregulation, diesel rates were regulated by the Centre. Deregulation makes the diesel prices market determined without any government intervention. That means any fluctuation in the global crude oil prices will directly affect the retail diesel prices.

Three years later, in June 2017, the government introduced the daily revision of diesel prices or the dynamic fuel pricing model, according to which the fuel prices were revised daily based on the previous day's international crude oil price and currency conversion rates. With this India joined the likes of developed nations such as the US and Australia where even the smallest change in international oil prices would be directly passed on to the dealers as well as the customers on a daily basis.

Nevertheless, fuel users in India have hardly benefited from the move even as crude oil prices have been plunging consistently, despite fall in international oil prices. From the highs of $105 per barrel in 2014 to $74 per barrel in 2018, the current prices hover near $40.

When rates had peaked in October 2018, the government had cut excise duty on petrol and diesel by Rs 1.50 per litre each. State-owned oil companies were asked to absorb another Rs 1 a litre to help cut retail rates by Rs 2.50 a litre.

Oil companies had quickly recouped the Re 1 and the government in July 2019 raised excise duty by Rs 2 a litre.

In April this year, the fuel was retailing at Rs 62 per litre as the demand for the fuel was near zero in India due to the COVID-induced lockdown. On Wednesday, when the international oil price is at $42.75 a barrel, diesel is retailing at almost Rs 80 in Delhi.

The government on March 14 hiked excise duty on petrol and diesel by Rs 3 per litre each and then again on May 5 by a record Rs 10 per litre in case of petrol and Rs 13 on diesel. The two hikes gave the government Rs 2 lakh crore in additional tax revenues. A recent report by Care Ratings noted that the Central government now collects around 270 per cent taxes on the base price of petrol and 256 per cent in the case of diesel.

Oil PSUs Indian Oil Corp (IOC), Bharat Petroleum Corp Ltd (BPCL) and Hindustan Petroleum Corp Ltd (HPCL) instead of passing on the excise duty hikes to customers adjusted them against the fall in the retail rates that was warranted because of fall in international oil prices to two decade low. International oil prices have since rebounded and oil firms are now adjusting retail rates in line with them.

Meanwhile, the falling rupee has also added to the cost of the fuels, according to oil marketing companies. From less than 60-levels of June, 2014, the rupee is currently trading near 76-mark against the dollar. OMCs argue that much of the gains of lower crude oil prices have been offset by the falling rupee that makes oil imports that much more expensive.