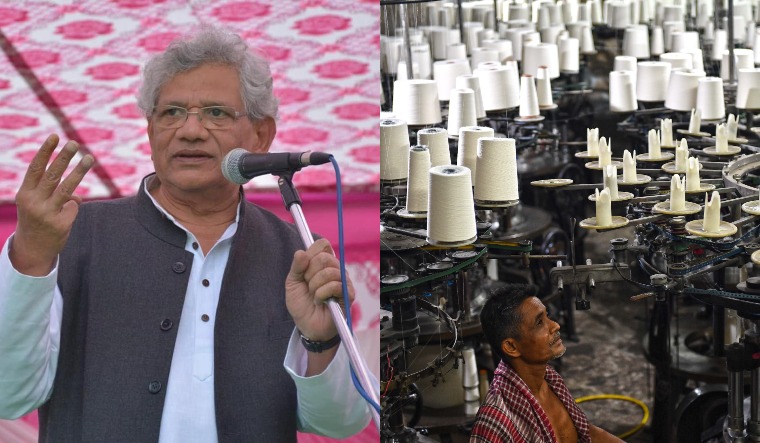 A collage showing Sitaram Yechury (official Facebook account) and a hosiery unit, which is inactive due to the lockdown (Salil Bera)

Speaking on a programme in a TV news channel on the Narendra Modi government’s recent economic package, CPI(M) general secretary Sitaram Yechury said that the package only gave some credit facilities to small and medium businesses, but would prove useless in the absence of demand.

Yechury said that the problem for India’s economy is lack of demand, and to create demand, he proposed that every person not paying income tax in India should be given Rs 7,500 per month for three months and free food.

In India, as stated by Modi himself, and as endorsed by the Income Tax Department, out of the country’s total population of about 135 crore, only 1.46 crore people pay income tax, that is a little over 1 per cent of the population. In other words, almost 99 per cent people do not pay income tax in India. So if Yechury’s proposal is accepted, about 133.5 crore Indians will have to be given this dole, which works out to be Rs 1,00,12,50,00,000 per month for three months! Has Yechury ever asked where will this money come from, or if it will fall like Manna from the sky?

Moreover, there is massive corruption in India, and so many government schemes, though appearing to be fine, in practice become another source for corrupt politicians and officials to make money. Former prime minister Rajiv Gandhi had said that of every rupee spent in a government scheme, only 10 paise reaches the really needy. In other words, 90 paise of every rupee is gobbled up by corrupt politicians and bureaucrats. It is true that Modi is personally honest, but he is only one man in a system that is largely corrupt, and in that respect, has not changed since Rajiv Gandhi’s time.

Yechury is right when he says that the main problem for our economy is how to increase demand. For without people having the purchasing power, how will the goods produced be sold?

I submit that it is not possible to solve this problem within the present system, and it will require a revolution and creation of a new political and economic system for this. I have explained this in my article The economy’s problem is one of purchasing power, not production.

I had explained that in the erstwhile Soviet Union when the first five-year plan was announced in 1928, the methodology adopted by the Soviet government was broadly this: The govt fixed the prices of all commodities, and every two years or so reduced these prices by 5-10 per cent (sometimes wages were also raised by 5-10 per cent). Thus, even with the same wage now the worker could buy more goods, since goods had become steadily cheaper (the real wage is relative to the price index).

In this way, the domestic market was steadily expanded (as prices were regularly going down). Simultaneously, production was stepped up, and this increased production could be absorbed in the domestic market, since the people’s purchasing power was steadily going up. This solved the unemployment problem in the Soviet Union, since thousands of new factories were set up, requiring many workers. The people’s standard of living also rose with increase in their incomes

This was at a time when the Great Depression had hit the Western world after the Wall Street slump in 1929, following which one-third of workers in America and Europe became unemployed following closure of thousands of factories.

I am not saying that India must necessarily follow the Soviet model. We can devise our own model, but whatever it is, it must raise the purchasing power of the Indian masses. Whether this is possible within the present system is, in my opinion, doubtful.