Budget 2019: Bounty for Ayushman Bharat to go up by more than 100 per cent 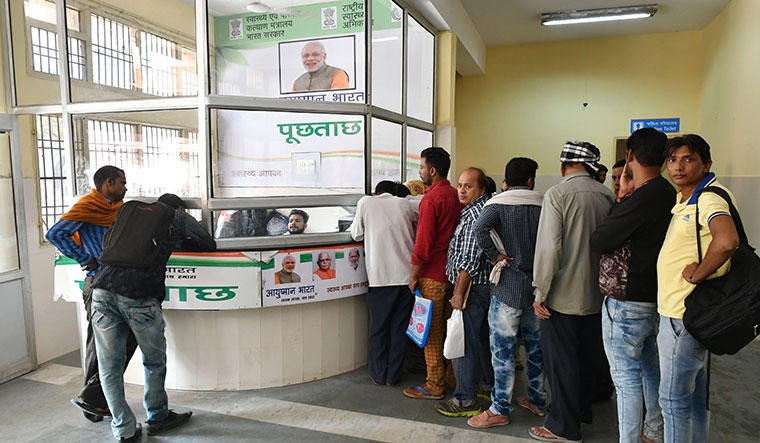 One year after the Pradhan Mantri Jan Arogya Yojana, also known as Ayushman Bharat, was announced by the Union Finance Minister Arun Jaitley in the budget speech, the demand for funds for the scheme has doubled. According to informed sources, the National Health Agency (NHA)—the agency tasked with the implementation of PMJAY—has asked for Rs 7,400 crores for this financial year. The total estimate for the scheme (the Centre's share is 60 per cent; it is 90 per cent in the Northeast) is Rs 12,000 crores.

In the last budget, the demand from the Union ministry of health and family welfare was for Rs 3,135 crores. However, the ministry was granted Rs 2,400 crores for the scheme. This year though, the NHA is confident of being sanctioned Rs 6,400 crore in the upcoming budget.

Launched with an eye on the Lok Sabha polls this year, PMJAY is the Modi government's biggest push for reducing out-of-pocket expenses incurred by the poor on healthcare. The scheme provides a cover of Rs 5 lakhs for each family, and intends to cover 10 crore families.

This month, PMJAY has touched the beneficiary count of 10 lakhs, and in the next one year, officials say they are looking at a staggering 50 lakh to 1 crore beneficiaries. This is across the 29 states where the scheme has been launched. However, West Bengal recently opted out of the scheme after it accused the Centre of violating the terms of agreeement signed between the two for implementing the scheme. Delhi, Telangana and Odisha have also not joined the scheme.

A cut of Rs 800 crore in the original demand for funds, however, will not affect the scheme, sources in the NHA said. “We are confident of managing with this amount since few states have not joined the scheme. If they do, we will ask for supplementary funding,” an NHA official told THE WEEK.

Currently, 14,000 hospitals are empanelled, and about 60 per cent of them are private hospitals. The top treatments for which the agency has received claims are cardiac procedures, cancer treatment, and orthopedic procedures, according to the NHA.

“The challenge is not money, but using the money. As the scheme expands, our challenges will be around ensuring last mile delivery, preventing fraud and abuse, and making sure that the beneficiaries are aware of the scheme,” said Dr Indu Bhushan, CEO, Ayushman Bharat–Pradhan Mantri Jan Arogya Yojana (AB-PMJAY) and the National Health Agency (NHA).