Mir had “flashes of inspired intuition” while writing his book 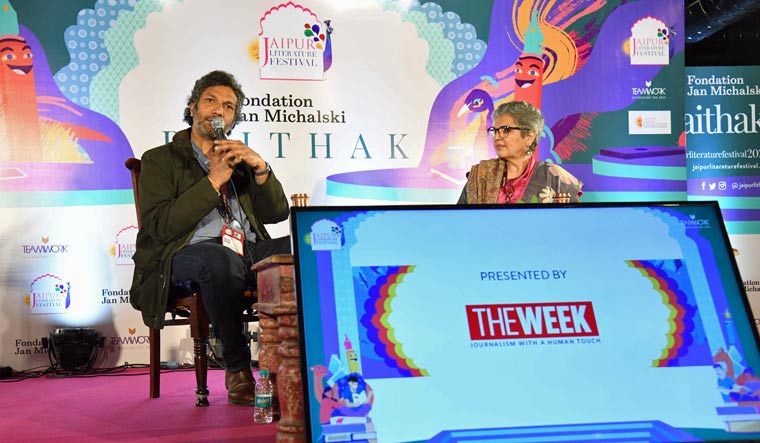 -“Sit, be still and listen”

-“Patience is the key to joy”

-“Dance until you shatter yourself”

-“Set your life on fire”

A cursory search on Rumi, the 13th-century Sufi mystic, throws up these sayings of his. Many of us may have received them as forwards on WhatsApp, and this is what infuriates London-based writer Moin Mir, whose latest book, The Lost Fragrance of Infinity, explores the allure of Sufi philosophy. “One does not know whether [these sayings] were actually written by him and reused in the most bizarre way,” he said at a session with historian Rana Safvi presented by THE WEEK at the Jaipur Literature Festival. “Rumi in the west became this symbol of hippie culture and he was very far from that.”

To disabuse his readers of such misconceptions, he said, was one of the reasons why he wrote The Lost Fragrance. There were others, too. “Sufism, in many ways, is the lost voice of compassion,” he said. “And in its essence, it is not understood properly. I, too, am a student of it because it is so complex. There are various ways in which one can approach Sufism. Historians and academics look at it through the lens of history and philosophy, but I thought of looking at it through the lens of the complex mind of the Sufi. One that is fired by curiosity and that drives innovation, one that surrenders to divine love and finds itself investigating art, literature, and poetry. I took that approach.”

It was his grandfather, Mir Khairat Ali Khan – a leading scholar of Sufism in India – who got him interested in the subject. Khan was an expert on Mirza Ghalib and Persian mathematician and poet, Omar Khayyam. Under his tutelage, Moin began exploring the byzantine alleyways of Sufism. If he got his love of books from his grandfather, he got a love of travel from his grandmother, Ziaunnissa-Ladli Begum, who spent most of her youth travelling between India, Baghdad, Cairo and the Levant.

Moin himself travels extensively to research his books. In fact, going through his Instagram page is like sinking into another world, another time. He makes you see things with new eyes – like the majestic square in Palermo, the ruined city of Pompei, the quaint island of Mazara Del Vallo in Sicily, the caves and monasteries of Greece…. You don’t just see them, you see them through Moin’s eyes. He shows you how he discovered the Greek philosopher Plotinus’s teachings in Greece or was wonderstruck by the sculpture of a satyr at a museum in Sicily.

In fact, it was while he was passing through the town of Bursa in Anatolia that he found the Sufi who would inspire the central character of the tilemaker Qaraar Ali in The Lost Fragrance. “Early in the morning, I visited a fabulous mosque with geometric tile work,” said Moin. “I found an old man sitting under an arch twirling his beads. He was a Sufi, and as the slanted rays penetrated the stained-glass windows and fell on him, I felt a pull towards him. I went and spoke with him. He asked me what I saw when I looked at the tiles. Then he told me that they represented the different castes, cultures, races and languages of mankind, and bang in the middle was the eight-pointed star, which is the star of enlightenment. Now obviously, historians and academics will have a completely different take on what geometric tile-making is, but I was struck by the simplicity of it. This ascetic sitting in this quiet mosque saying something so beautiful was amazing. And so that became the heart of my story in many ways.” The Lost Fragrance is set in the 18th century and is about a man who flees Delhi and on his way to Andalusia, Spain, he discovers love through Sufi philosophy. It is almost a metaphor for Moin’s own life.

Moin says he is not a practising Sufi and hence has never had a mystic or transcendental experience. However, he has had “flashes of inspired intuition”, when he would get the surety that he was destined to write a particular line. Every good writer has perhaps had that experience, of finding perfection in a thought which would then almost write itself. Moin knows how rare such an experience is, and like the tenets of Sufism, he holds it close to his heart.