The start-up employs young graduates after vetting their emotional maturity 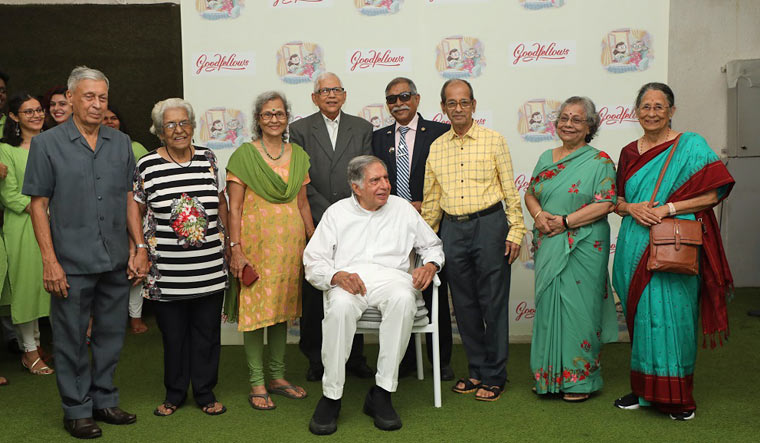 Start-up developers thinking of modern ways to address the unmet needs of the elderly in India haven't made much headway beyond medicines, ailments and shopping on smartphones. There are e-commerce websites for "senior-centric products" and apps which offer disembodied personal assistants for timely reminders on medications. An all-new company, backed by none other than Ratan Tata, hopes to make a more meaningful impact in elderly care by being a "senior companionship start-up for intergenerational friendships."

Called Goodfellows, the for-profit start-up employs young graduates after vetting their emotional maturity, empathy and commitment to the task of forging bonds with their older clients as friends. With seed funding from the chairman emeritus of Tata Sons, the subscription-based company launched on 16 August.

Over the past 6 months, “Goodfellows” completed beta and will now be available in Mumbai with Pune, Chennai and Bangalore as the next target cities. During the beta testing phase, Goodfellows received a positive response with over 800 applications from young graduates looking to be employed at Goodfellows of which a shortlisted cohort of 20 provided companionship to the elderly in Mumbai. Senior citizens can avail of the services by signing up on thegoodfellows.in or can give a missed call at +91 8779524307 or check out their Instagram handle.

The start-up for the elderly aims to recognize loneliness and mental health issues as real public health concerns in India by making a Goodfellow work like a grandkid. There are 15 million elderlies in India living alone, either due to the loss of a partner, or families moving away for unavoidable work reasons. While many of them have caregivers or start-ups for utilitarian needs such as e-commerce, the issue of loneliness or lack of company has been the primary reason for deteriorating mental and physical health.

The company is founded by Shantanu Naidu, general manager in the office of Ratan Tata. Naidu has also penned his friendship with Tata in a book called “I Came Upon a Lighthouse" (HarperCollins), which was released early last year. Tata became Naidu's mentor after the octogenarian invested in the entrepreneur's new venture on saving stray animals from speeding cars. Naidu's new company for senior citizens now has support from Tata to help form bonds between the two generations. “The start-up emphasizes that companionship means different things to different people. To some, it may mean watching a movie, narrating stories from the past, going on a walk or having quiet company sitting around doing nothing together, and we are here to accommodate it all. In its beta phase, we discovered how organically the Grandpals bonded with the Goodfellows," said Naidu in a press statement.

Goodfellows also hosts monthly events curated for Grandpals who participate with their Goodfellows, with the hope that the bonds become deeper and enjoyable in a different environment. This allows the Grandpals to meet each other as well as more young graduates, building a sense of community.

The business model of Goodfellows is a freemium subscription model. The first month is free with only the goal of having the Grandpal experience this service since it’s hard to understand the concept without actually going through it. The second month onward is a small subscription fee that has been decided based on the limited affordability of pensioners.

To give the young graduates dignified, respectable salaries, this is a paid service. This also ensures that chosen goodfellows are retained, groomed and have a career ladder while giving back to society. The subscription model also ensures that when the seniors bond with the goodfellows, they do not keep rotating the graduate visiting them since that does not allow enough time or emotional attention to form an authentic and real bond. Several non-profit models in this space have failed since volunteering happens as per the availability of volunteers and no one invests enough time with one senior.

Goodfellows offers short-term internships as well as employment to graduates looking to find a job. In the near future, Goodfellows will offer travel companions for seniors holding back from making trips due to lack of security or company, and also plans to extend its services to the handicapped community facing similar or more challenges.