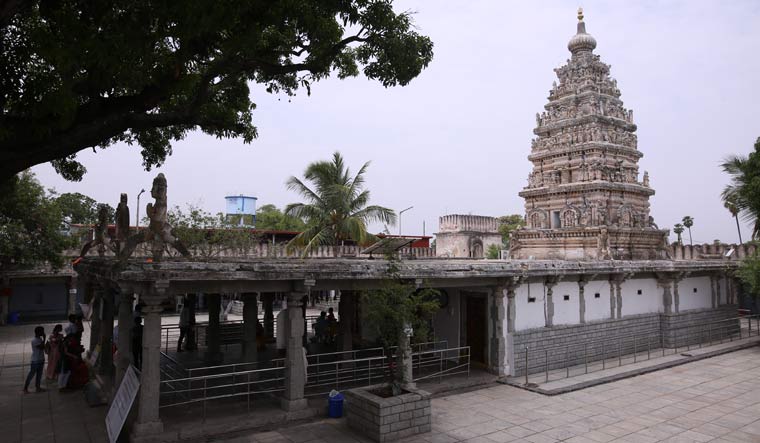 On a balmy day, a Telugu family sat cross-legged on the floor facing the sanctum sanctorum of a temple. An hour or so later, as the sun burned brighter, the couple and their two daughters shifted to a platform adjoining the outer precinct of the holy structure. They had already paid obeisance to Ram, Sita and Lakshman but their patience and time was reserved for an important task. They wanted to have a second round of discussions with the temple administrator, who was yet to reach the spot. The parents were persistent about getting one of their daughters married inside the temple premises. The staff were adamant too, about not allowing another fancy event within the Prakara or boundaries of the temple. Their concern was genuine. The frequent weddings inside the Sri Seeta Rama Chandra Swamy temple was bothering the devotees, for who the temple came up hundreds of years ago.

Shamshabad is located on the outskirts of Hyderabad and enjoys a global tag as it houses the international airport. A 10-km drive from this landmark will take you to Ammapalli village through well-laid roads. A wide arch on one side of the road welcomes visitors to probably one of the oldest temples of the Deccan region. Standing on almost 9 acres of land, the temple and its affiliated structures have an ancient feel to it. Perhaps, this is the reason why the temple is now one of the most sought-after wedding venues for the who’s who of Hyderabad. Some of those who got married here hail from film fraternity and powerful political and business families.

The temple design is architecturally unique and appealing. The entrance tower or gali Gopuram of the temple complex is multi-storied with jharokhas or balconies and idols of different shapes, sizes and colours depicting characters and stories from Hindu scriptures. This unique lean tower forms the backdrop for the mandaps setup just outside the complex for many of the big fat weddings. It is lighted up with lasers usually to enhance the grandeur when the wedding rituals are underway.

At any given time, the temple is overbooked for weddings. Sathyanarayana Murthy was witness to the transformation of his abode from a simple wedding venue of of poor villagers in the 90’s to now glitzy events, replete with burly bouncers and stunning decor running into crores. He has been the chief priest of the temple for the past two decades.

“I was brought to the temple as I was considered a specialist in conducting the wedding rituals of lord Sita and Ram in a proper way. When I first entered the temple in 1995, I felt like I wanted to spend the rest of my life here. It was isolated and covered with forest, yet it was beautiful. Till 2000, I would hardly see one devotee a month and I was the only one managing the entire temple. Word-of-mouth spread and devotees started trickling in from 2013 in a big way. Around 50,000 people attended Sri Rama Navami festivities that year. From 2016 onwards, there was a sudden surge in big weddings.”

The temple is also a favourite spot for Telugu movie makers. Around 450 movies, starring popular actors like Sr NTR, Chiranjeevi and Mahesh Babu have been shot here.

One of the highlights of the religious site is the step well which is located outside the entrance of the temple complex. The water body is surrounded by big rectangular steps on one side and narrow corridors on the rest of the three sides which makes it a perfect location for pre-wedding shoots. On any average day, It is a common sight to see potential partners holding hands or gazing into each other while a photographer tries a candid shot.

On a weekday, a Kerala-themed shoot was in progress. The man was wearing a golden colour shirt and lungi and the woman was wearing a silk saree. Accompanying them was a team which included photographers, assistants, make-up artists, drone operators and stylists.

Mahesh of Veda albums who was one of the photographers assisting in the shoot, said, “Nowadays, this location is highly preferred by the clients. It works out well for us as we can finish 60 per cent of the pre-wedding shoot here. There is a water body, attractive temple, pillars, greenery and other ideal setting for long and close-up shots.”

According to Mahesh who has been to the temple multiple times, it takes 4-6 hours to complete the shoot. “Sometimes, over the weekends, it gets so crowded with pre-wedding shoots that we have to request the other group to hurry up.”

There are different wedding venues inside and outside the temple complex which can accommodate 300 to 1,000 people. Inside the temple complex, the inner side of the periphery is a sheltered passage supported by grey stone pillars. The tall coconut trees that can be found at every corner adds to the beauty of the temple. The Gopuram (tower) of the main temple has the idols of Krishna, Vishnu and others in different poses, visually narrating stories.

The temple has its own origin story. It is believed that Ram, Sita and Lakshman toured this region during their exile. Though there is no concrete proof to support this claim, the idols which are made of black stone are estimated to be from the 11th century.

R. Vinod Rao, whose ancestors had constructed the temple, is the founder-trustee of the temple. According to him, the temple was built in phases and the earliest structure could have been from the 16th century. “It is a cosmopolitan temple,” he said, pointing to its architecture which has impressions of different styles and cultures. “The first sun rays of the morning directly fall at the feet of the lord Rama. It has been constructed that way.”

It is believed that the artisans and experts from Karnataka and Rajasthan were involved in the construction of the temple.

Hard to miss is the fact that some of the idols are either missing or damaged. The structure has also developed cracks at several places. Project architect Bhavana Reddy and conservation architect Arunima Shankar and their team have taken up the arduous challenge of restoring the temple. Currently, the team is working on the outer entrance tower.

Reddy said that the temple was built with brick and lime mortar, stone and wood, and efforts are on to use the same materials. “We sent the lime for testing to Vellore. We wanted to find the lime which matches with the lime used in the construction of this temple. We found that the lime from Gulbarga was the most suitable,” she said, “To understand and continue the storyline, I have also been watching old movies where parts of the temple was visible, this was before they were damaged.”

Not stopping at just restoration, the team is also coming out with a well-researched book on the history of the temple.