How Covid-19 has spurred demand for Indian agarbathis abroad

USA, UK, Malaysia, and Nigeria are the top 4 countries importing and using agarbathis 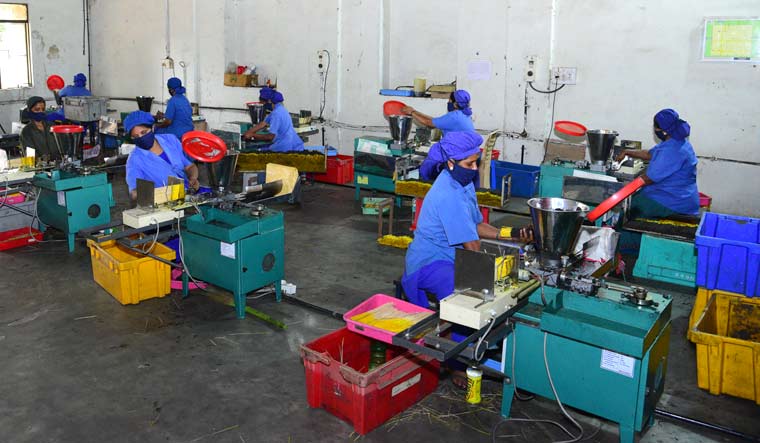 The psychoactive effects of burning incense is well known. Religious leaders and scientists alike have attested to the tranquilising power of a fragrant dhoop. Back in 2008, researchers from Johns Hopkins University and the Hebrew University expounded on how "burning frankincense (resin from the Boswellia plant) activates poorly understood ion channels in the brain to alleviate anxiety or depression". Yoga, aromatherapy, meditation, chanting, spa sessions or as room freshner, each one of these wellness routines tend to incorporate incense sticks to aid and enhance their healing experience. Would it come as a surprise then that our good old agarbathi saw an uptick in usage during the pandemic?

With Covid-19 strengthening the case for wellness and associated lifestyle changes, the Indian agarbathi, too, is witnessing a surge in demand, thus spurring exports. According to the latest report by All India Agarbathi Manufacturers Association (AIAMA), established in 1949 for redressal of grievances of the agarbathi manufacturers, the United States of America, United Kingdom, Malaysia, and Nigeria are the top four countries importing and using agarbathis. Additionally, with the pandemic still prevailing, yoga and meditation have become an important aspect of one's emotional wellness, which has further triggered the demand for agarbathis in the international markets.

Established in the year 1949 as MOMA (Mysore Oodabathi Manufacturers’ Association) by seven founding members and later renamed as AIAMA in the 1980s, it is the oldest agarbathi manufacturing and advocacy collective of its kind in India. Currently, more than 800 agarbathi manufacturers across India are life members with AIAMA.

According to data available from the Union ministry of commerce and industry, the segment on Agarbatti and Odoriferous PRPNS, registered a growth of 20.51 per cent between April-Feb 2021 to April-Feb 2022, with export revenues rising from Rs 96,261.62 lakh to Rs 1,02,725.23 lakh.

"There are several popular incense manufacturers in the world. Especially from Thailand, Japan and the Middle-East, where they are called bakhoor. But Indian agarbathi is the only kind that is exported to almost 140 countries because being the oldest form, it is more widely accepted," says Arjun Ranga, president of AIAMA, highlighting how the product has transcended religion to become a more potent expression of spiritualism. The predominant hubs of making agarbathis in India are Karnataka and Tamil Nadu, with several set-ups in Maharashtra, Gujarat, Madhya Pradesh, Odisha and Bihar. Kannauj in Uttar Pradesh is also part of the current map on agarbathi-making in India. A labour-intensive cottage industry, it employs a good percentage of rural women who roll the bamboo sticks at home or in clusters nearby.

Aroma trends and fragrances are inclined towards floral flourishes and cosmetic notes such as aqua, lavender, oudh, mogra, rose, champa, lavender, lemon, citronella essential oils. Sandalwood, Ailanthus malabaricum (which yields halmadi) and other natural ingredients are used to make these special agarbathis. Some Mysore agarbathis that used only locally available material were given Geographical Indication status in 2005 after the AIAMA proposed registering Mysore Agarbathi for the GI tag. Recently, special covers were also released by the Karnataka Postal Department to commemorate the GI status of Mysore Agarbathis.