A fan mourns the passing of novelist Wilbur Smith 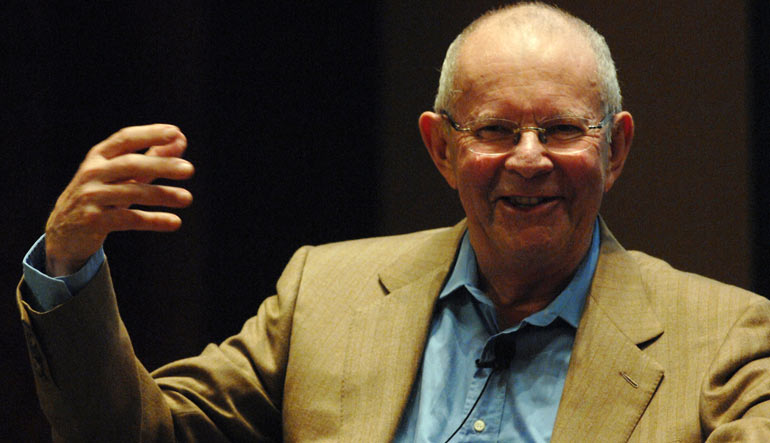 Disclaimer: This is not an obit. It is a fan’s lament. If you are looking for something more balanced, you should perhaps look elsewhere.

Wilbur Smith first walked into my life in 2001—through River God, at a book fair in Kottayam—under the watchful eyes of a girlfriend. She parted ways three years later. But Smith and I continued to be friends. Friends, yes. When we met in Bangalore in 2011, and talked about his books in my collection (then 33 or so), Smith exclaimed with a grin, “We are friends then! Just that we have not met before.”

My copy described him thus—"boyish grin, greying hair cropped close, white shirt with thin, sky blue stripes, gold cufflinks, Rolex, dark blue D&G jeans, and sneakers”. In person, too, he was an amazing storyteller. Some stories found their way into my profile of him, too. Like the one about when he signed Frederick Forsyth’s books.

On November 13, Smith died at his Cape Town home with his current wife, Mokhiniso 'Niso' Rakhimova, by his side. His estate did not mention the cause of death. He was 88. Of all the places in the world, he would have loved to die in this house—on the three-acre Sunbird Hill, bordering the Kirstenbosch national botanical gardens.

After having been close to so many animals, he had singled out the sunbird for a singular honour—his personal crest. He loved to watch them flitting through his garden, looking for nectar. “I believe good things happen to me when these green, iridescent visitors come calling,” he said. The bejewelled birds will surely miss their admirer.

He called the little visitors by their Afrikaans name: klein suikerbekkie, little sugar beak. Smith held that a name in the local language or Afrikaans was more evocative than in English. Livingstone’s Victoria Falls pales in comparison with the waterfall’s Kololo name—Mosi-oa-Tunya, the smoke that thunders.

Smith’s inspiration was his father, Herbert James Smith. And then there were the many writers who were his favourites, writers of clean, gripping prose—Rider Haggard, Ernest Hemingway, Somerset Maugham, C.S. Forester, Frederick Courteney Selous. One book that keeps popping up in his books is Jock of the Bushveld by Sir James Percy FitzPatrick.

While his father instilled in him a love for the land and guns, his mother, Elfreda Lawrence Smith, gifted him the eyes of a painter. Smith’s chalet in Davos, Switzerland, is almost entirely decorated with her watercolours—around 200 of them.

He told me about his favourite painting. “She did one of me as a small boy walking along the beach, at sunset, with my fishing rod and bait-box,” he said. “She has painted every house that I ever had.” A small urn with her ashes was a constant in his study.

In addition to these influences, Smith mostly wrote of a land and times intimately known to him, and therein lies his success.

Smith has said that he is a better writer than a father. He was married four times—the first two ended in divorces, and the third, novelist Danielle Thomas, died of brain cancer. Niso is 39 years his junior. In Bengaluru, he quipped that he had found the Tajik-origin Niso among the Grishams at a W.H. Smith bookshop in London, and gently steered her to his display.

He has four children—sons Shaun and Lawrence, daughter Christian and stepson Dr Dieter Schmidt, Danielle's son from her first marriage. He was out of touch with all of them; Niso was helping him build bridges, says the grapevine.

Smith in my life

As I said, Smith had been a constant thread in my life since 2001. When I got married in 2008, a dear friend gifted us The Quest. A gift that became priceless after Smith autographed it for my wife and me.

In 2009, the Indian Premier League’s first ‘away season’ saw me in South Africa. In Kimberley—Northern Cape province, where the vast Karoo grasslands meets the great Kalahari desert—I got a taste of the diamond country that Cecil Rhodes and his ilk shaped. You, of course, know of the firm that Rhodes founded, backed by N.M. Rothschild & Sons. De Beers, a name synonymous with diamonds.

In 2011, Senior Special Correspondent Mandira Nayar passed on an invitation to interview Smith. Deputy Photo Editor Bhanu Prakash Chandra and I met him at the Taj West End during the Landmark Wilbur Smith Tour.

In 2018, the great flood wiped out around 600 books in my collection, including my Smiths. I mourned them and grieved like a child. Dear friends Gayathri ‘G’ Krishnan and Hari Subramaniam stepped in; G gave me every last Smith that her late father had left her.

On November 14, two college friends broke the news about Smith’s death to me. Yet, Smith has not left his readers alone. River God and its siblings remain on my shelf, markers of a forever friendship.