Dog bite cases in Leh have been increasing 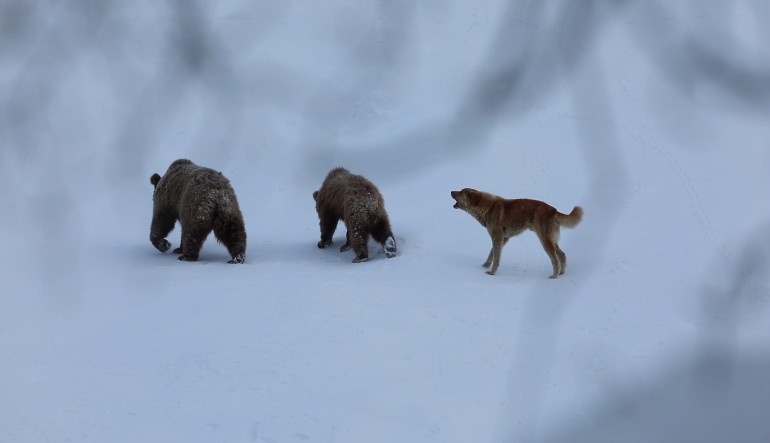 Nikhil Talegaonker talks about a "bizarre" breed of dog called ‘Khibshank’. He came to know about them while filming Khee in Ladakh some three years ago. Khee in Ladakhi translates to dog and "shanku" is wolf. When the stray dogs there mate with the wolves, they create a hybrid which is locally named Khibshank.

In the 35-minute documentary Khee, now screening at the 10th Dharamshala International Film Festival, the locals describe Khibshanks as an aggressive sort, distinguished by longer tails and ears which look much different than the street dogs.

"They are found near the Hemis National Park area and are known to have killed livestock in the surrounding villages," says Talegaonkar on the phone from Pune, where he lives. The high-altitude national park is also globally famous for the endangered snow leopards. "We did not come across any documented cases of Khibshanks attacking snow leopards. But there are cases of stray dogs attacking the elusive mountain leopards," affirms Talegaonkar, highlighting the severity of stray dog attacks which have gone up through the years in the land of the high passes.

In Khee, there is raw footage of a stray dog attacking and killing a snow leopard, shot in December 2018 by the producer of the documentary Sandeep Dhumal, a wildlife photographer himself. It was during a two-year project on wildlife documentation in Ladakh that Dhumal got to know about the serious and ever-increasing incidents of dog attacks in the Union territory which is always in the news for its tourism potential, its rugged, breathtaking beauty and defence and strategic importance. But the problem of dogs growing wild and feral in the winter months has been persisting now for more than a decade.

In the documentary Khee, the filmmakers show how the stray dogs have gone rogue on humans, the rarest birds and wildlife species, apart from goats and lambs. By seamlessly merging media reports, victim and eyewitness accounts, soundbites by officials from the department of animal husbandry, birth control, wildlife protection and law enforcement alongside footage acquired from villages of Suspol, Nyoma and the dumping yards of tourist-choked Leh town, the filmmakers show a much neglected and worrying trend of stray dogs going wild in Himalayan territories like Ladakh. The alarming rate of growth in the stray dog population in Ladakh was first attributed to improper disposal of kitchen waste by the Army and later due to irresponsible tourism.

"In the tourist season from July to October, the dogs have much to feed on as the tourists throw food at them out of affection. In the winter months, from late November, Ladakh literally shuts down for tourists. And these dogs then prowl in packs everywhere for food. Almost all the vicious attacks have happened in the winter months," says Talegaonker who has recounted the killing of birds like ruddy shelduck and the black necked cranes (including the destruction of their nests, eggs, and hatchlings), the killing of the rarest of the wild cats called Lynx, attacks on large brown bears and snow leopards.

The size of the victim is not a concern for a pack of wild, hungry dogs. The film begins with the accounts of the kin of two young women who were badly mauled and eaten by wild dogs in the villages of  Suspol and Nyoma. The incident in 2016 at Suspol had created a furore, so much so that locals had begun to round up dogs to throw them in the river.  This led to the creation of Ladakh's only dog shelter by a non-profit called Live to Rescue in collaboration with Young Drukpa Association and the animal husbandry department of Leh. But maintaining this shelter is an expensive affair. And not every homeless dog in Ladakh can be accommodated here.

Registered dog bite cases in Leh have only been going up, from 854 in 2017  to 1,529 in 2019. Some 141 people were reported to have been bitten by dogs in January alone in 2020. Data from villages beyond Leh is hard to come by. "Everyday, some five to seven cases of dog bites are registered in the local hospital of Leh alone," approximates Vishudha Lobsang, chairman of the Wildlife Conservation and Birds Club of Ladakh in Leh. "Sterilisation of dogs is now happening at a better pace than before. But the issue is still there and it is a big one. The strays become long-ranging dogs in the winter months, who travel more than 10 to 15km. For the last one decade, shepherds don't go alone to the fields. And they travel with clubs and sticks," says Lobsang, who agrees that sterilisation isn't exactly the solution when the problem itself starts with lack of food in the winter months.  "Neither is culling accepted by society."

The film mentions, in one sequence, how even Mahatma Gandhi was against stray dogs. The filmmakers came away with a renewed understanding of managing strays in city streets. "We like to offer our neighbourhood dogs Parle-G biscuits and feel good about it. But feeding street dogs is feeding into the problem. One should not do it for some pseudo-satisfaction. If you really want to do something about stray dogs, try to give them a home," says Talegaonker, a dog-lover himself. He is trying to crack television deals for Khee for wider dissemination. "We expect to receive a lot of flak from dog-loving communities. And we are prepared to take them. But we want people to watch this and start a conversation around it."