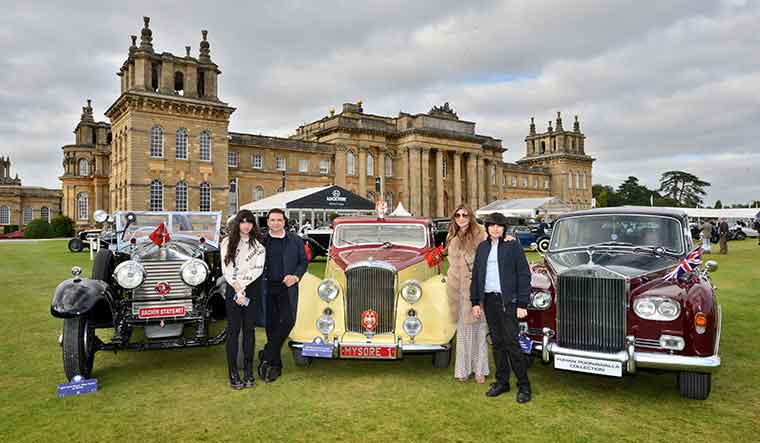 The Maharajas of pre-independent India were perhaps the most discerning petrol heads. The Maharaja cars have a special place in India's automotive history. It is estimated that between 1910 and 1947, some 900 Rolls-Royces were sold to Indian princes of every persuasion, saving the company from near bankruptcy in the post-war years. Now the new royalty, India's richest 0.01 per cent, take the baton forward in placing India on the world vintage motoring map by restoring and exhibiting these old high rollers.

Recently, industrialist Yohan Poonawalla exhibited several cars from his collection at two of UK's premier motor shows including the 2021 Salon Privé which is held at Blenheim Palace, a UNESCO world heritage site and the ancestral home of Winston Churchill. Poonawalla's 1949 Bentley Mark VI, originally built for the Maharaja of Mysore, was awarded the Duke of Marlborough Award at Salon Prive. His 1927 Rolls-Royce Twenty HP by Barker, described by motoring historian Mohammed Luqman as a 'glistening piece of rolling art', was awarded the Most Exceptional Coachwork Award in the same show.

In an email interview with The Week, Poonawalla talks about online auctions, NFTs and his cherished "Rhubarb and Custard" car.

What was the first vintage car you bought? What was the story behind it?
In the 90’s I was tinkering around with a car here and a car there because I was still a young lad but the first proper serious car that I bought was in the year 2000 and it was a 1937 Phantom III. It belonged to the Maharaja of Panchkot which is a province in the eastern part of Bengal.


How would you explain your fascination with old cars? What draws you to them?

Personally, for me, a car is more than just its appearance or the way it looks. Whilst the design and performance play an integral part, the aspects which draw my interest and attention are the bespoke features, and pedigree - a glimpse into the past owners of the car and the events the car was a part of are a few of the factors that drive my decision. If the automobile narrates a story for itself, that piques my interest.

How resilient is the Indian car collecting market right now? Have you bought anything from an online auction in the pandemic year? Do you think vintage car sales will attract more buyers now with digital exhibitions like the online migration for visual art? Can there be any NFTs for vintage cars?
Of course, things are tight all over the world right now and so are they in India but things are starting to look up and improve.

No, I haven’t bought anything from an online auction here during the pandemic.

What this will do is basically create a platform for buyers to know what is out there.  To see the cars that are out in the market but basically, I think it is always wise that one sees the car before they actually buy it, you know.  You have to see it, you have to feel it because pictures are different and when you look at something physically it's different, as is not only with cars but so many other things as well.

Yes, maybe sometime in the future there can be NFTs for vintage cars. Basically, vintage car art per se, I think it has a large market not only in India but even worldwide.  So yes, one day probably but maybe not right away. At least not a big market right away.

How would you distinguish yourself from an older generation of vintage car connoisseurs? What dictates the choices of younger vintage car collectors?

I have a strong interest in cars with significant pedigree, for example, who their past owners were, what events and actions a car was part of etc. These vehicles often came from the manufacturer with customisations chosen by their original owners which make them unique and special. For example, my 1949 Bentley Mark VI, which was awarded the prestigious Duke of Marlborough Award, was originally built for the Maharaja of Mysore and came personalised with features including solid silver and 24k gold plaques and shields.

Can you tell us about some of your most prized possessions, their stories and the challenges of acquiring them?
Each vehicle is unique owing to its features and has its own story to tell, hence all cars are treated equally. However, there are a few cars which are well-celebrated and are known around the world - such as the Rolls-Royce Phantom II which was owned by the Speedster Sir Malcolm Cambell; the Maharaja of Panchkot’s 1937 Phantom III; the Mysore Bentley which is fondly called the ‘Rhubarb & Custard car’ owing to its colour scheme; and a 1939 4¼ Derby Bentley owned by the son of the last Nizam of Hyderabad.

When one is driven by passion and is always on the lookout for a car one wants, they are always available out there, as they say, one who seeks finds! It is true though, that at times it becomes difficult to find and acquire a specific car. The collector's hobby is not a race to hoard the finest and most expensive cars, it is about enjoying the cars one owns and sharing and showcasing them to others. Rebuilding, restoring and reviving great cars, and being part of the heritage motoring movement gives just as much joy to the true enthusiast.

Where does India stand with respect to the global pecking order when it comes to vintage car collectors? How has our international standing improved when it comes to winning awards and exhibitions?
There are some fantastic cars in India that came in the 1920’s to the early 50’s. Those cars are still in India and a few of them left India. Following that, the government wisely banned the export of cars but at the same time they should have encouraged the import of cars in India - the new cars, better and different ones could come to India but sadly the import of vintage cars was banned until a few years back when they reopened the import of vintage cars ‘Pre- 1950’. Now, one could import cars and people have started importing vintage cars ‘Pre 1950’ - cars that are excellent for India’s vintage car fraternity as the good cars have started coming in.