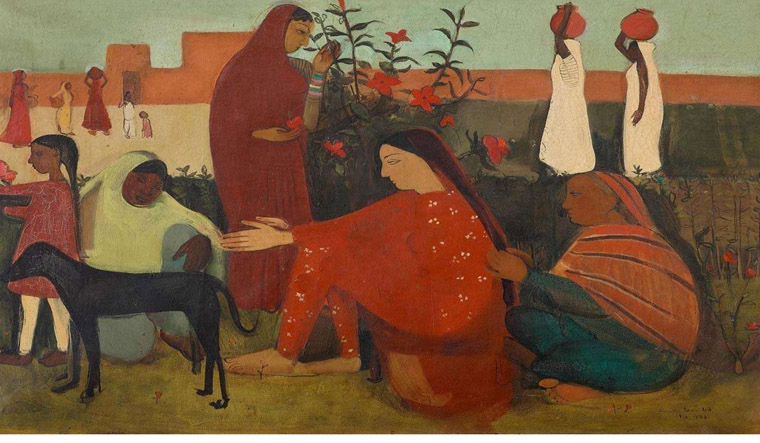 The financial year 2020-21 has been the strongest sales year in the history of Indian art auctions, according to Art Market Report 2021, produced by art research and advisory firm Artery India.

According to the annual report created by one of India's leading art market watchers, the year 2020-21 has been the strongest (roughly tabulated since 1987 when the first Indian art auction was conducted). In terms of  market performance and turnover, it achieved sales figures to the tune of Rs 880.9 crore from April 20 to March 21, despite depressed market sentiments and ample volatility. The numbers for FY 2019-20 was around Rs 560 crore; hence the pandemic year sales recorded a jump of almost 57 per cent. The Moderns category remained the big winner; in fact its turnover shot up by over 65 per cent from the previous financial year.

"[Artery India’s research and] data has revealed that the strongest opportunities appear in the aftermath of a financial crisis, typically three to 18 months following first impact. In that regard, current FY 2020-21 will be rife with asset acquisition possibilities," wrote Arvind Vijaymohan, founder and CEO of Artery India, in previous year's Art Market report. His data study and forecasts have actualised in the real world. The breakdown of data shows that even though the number of artists featured at auctions fell to 358 from the previous year’s 539, there were 58 new names that appeared. This, the report notes, is "a sign of a widening circle of tradable stock, and one that is a clear signal of market maturity." Again all-time high prices or "record breaks" fell to 75 works, from previous year's 135. But these 75 works fetched a lot more at Rs 98.2 crore, nearly double the previous FY’s Rs 52.5 crore. "It is revealing in many manners that all these records were falling in close succession while the world was reeling under the impact of the pandemic. The two breakthrough months at auction were September 2020 with a turnover of Rs 241.8 crore, and March 2021 which achieved sales of Rs 234.7 crore—both months that recorded extreme dips in the economy," the report notes.

Amrita Sher-Gil's 1938 'In the Ladies’ Enclosure'—which fetched Rs 37.8 crore last month at a Saffronart’s sale to become the second most expensive work of Indian art after V.S. Gaitonde's 'Untitled' (1961)—is not part of the tabulation in the report. 'Untitled' was sold for Rs 39.98 crore this year in March to become the most expensive work by an Indian artist. Artery India's 2020-21 report had already predicted that even though a rare Sher-Gil deserves to break record ceiling, it may still not trounce the Gaitonde benchmark this year. "According to Artery India research, only 16 canvases by Sher-Gil have been offered publicly for sale. 'In the Ladies' Enclosure' is one of them. At present, there are only a handful of her paintings in private ownership that might possibly come up for sale in the future, making the likelihood of owning one a uniquely rare proposition," says the report, pointing out that if the 'Village Scene' (which sold at an auction for Rs 6 crore in 2006) comes up for auction again this year, it can easily be estimated to sell anywhere between Rs 44 to 48 crore.