Indian Modernist artworks to go up for auction as NFTs

NFTs or non-fungible tokens have exploded in the art world 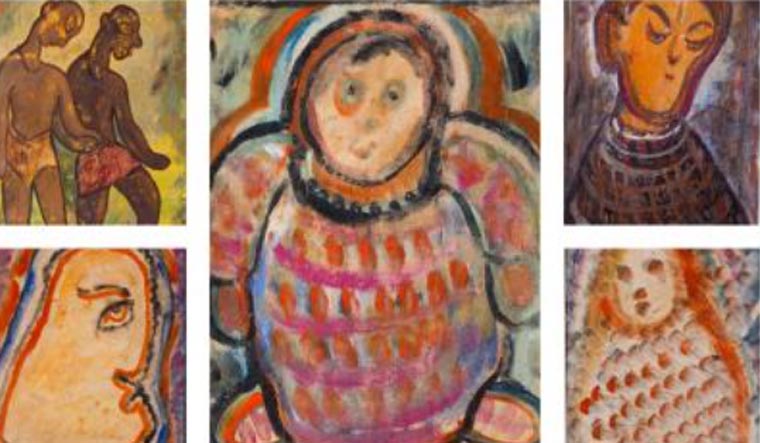 Before the world got to know about digital artist Beeple and his record-breaking NFT sale at a Christie's auction this year, there was CryptoPunks.

Considered one of the oldest NFT projects, CryptoPunks was created in 2017 as a collection of 10,000 pixelated portraits of blocky characters—they mostly resemble cartoonish dorks in different hats and hairstyles. Some are more like apes and aliens. Initially, the Punks did not find many takers; they traded free on an Ethereum blockchain platform. But after a news media company wrote about the art project, the Punks found themselves suddenly popular and highly sought-after. Many of the CryptoPunks were automatically produced from a pixelated character generator. Today, the price of CryptoPunks, considered art collectibles, range anywhere from $30,000 to $10 million in cryptocurrency.

Indrajit Chatterjee, director at Mumbai-based auction house Prinseps, was astonished to find a similar Punk-ish style aesthetic in a series of paintings by radical modernist Gobardhan Ash. He uses the analogy of avatars, cryptopunks and emojis to simplify this generational difference in Ash's watercolours depicting moody, distorted expressions and caricatures of CryptoPunks. "These paintings by Ash were done in the 1950s. They were simple representations of emotions, with details abstracted out. I was quite astounded to see this avatar-like work done back then.  I am sure the art critics of the time must have said, 'What the hell is this, even my child can draw better!' I think they were missing the point. The point was not if the child can draw better, but it is a step forward in creative thinking," says Chatterjee who, given the rave around NFTs and  cryptocurrencies, will "mint an exhibition" on the Ethereum blockchain on Prinsep's own platform. On July 15, an NFT auction of 35 digital prints from Ash's 'Avatar' series will be accompanied by a sale of the physical artworks from Ash's estate. "This whole series of 35 prints from the 1950s was missed out by art historians and it needs to get its right place. Therefore, we are recreating that or putting it out again so that people can see these artworks in their proper perspective," says Chatterjee.

Prinseps is the first Indian auction house to jump into the NFT bandwagon, albeit with older artworks. In this no-reserve auction, the prices of the Tiff-format NFT files will have a starting bid from Rs 1,000. "The NFTs are not a fad. I think it is a legitimate way of identifying who the owner of an artwork is. And we are essentially digitising older artworks that we think have a role to play in all of this avatar/CryptoPunk/personality studies. So we are gonna make a statement that some of these things have already been done in the physical space many years ago," says Chatterjee, who compares NFTs to ledgers or "bai-khatas" in art galleries from earlier times—these ledgers kept a record of ownership, sale and purchase details of artworks.

NFTs or non-fungible tokens have exploded in the art world. A unique digital asset (token) that can be minted, recorded, and traded on blockchain technology platforms, NFTs allow for easy identification of the owner of artworks, and a decentralisation of the knowledge around this ownership.

In late July and early August, Prinseps will also host an auction of rare sarees from celebrated costume designer Bhanu Athaiya's estate. Athaiya won India's first Oscar as costume designer for her work on the 1983 film 'Gandhi'. She came from a family of temple priests in Kolhapur and inherited a vast and varied collection of traditional sarees from her mother and grandmother. Alongside this auction of physical heirlooms, Prinseps is going one step further by converting Athaiya's elegant fashion sketches from the 50s and 60s into NFTs—almost like a curatorial play of the traditional with modern.

Explaining how her early sketches of dainty women in sarees fit the format of the digital asset, Chatterjee notes, "If you take an oil on canvas, thick in impasto and texturing, and try convert it into digital art, the texturing will not show well on a two-dimensional flat digital screen. So, not every artwork can be converted into a digital format. Gobardhan Ash's sketches are all watercolour-on-paper. And Athaiya's fashion sketches are again done on paper, so they are already in a two dimensional format."