Frida Kahlo: Of art and pain

Frida poured out her suffering and transmuted her pain in paintings 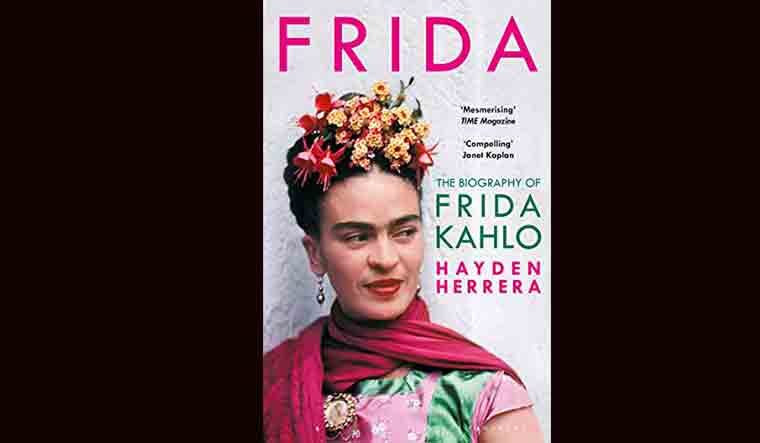 Frida Kahlo took to painting to distract her mind from the acute pain she suffered after a terrible accident at the age of 18 on September 17, 1925. The bus that took her home from school was rammed by a streetcar in Mexico City. She was literally impaled on a metal bar in the wreckage; her spine was fractured, collarbone broken, her pelvis crushed, her abdomen and uterus punctured, shoulders dislocated and leg crushed. Her scream was said to have been louder than the siren of the ambulance which took her to the hospital. ﻿Frida’s condition was so grave that the doctors did not think they could save her. They thought she would die on the operating table.

It was a miracle that she was saved after surgeries and treatment for two years. After the accident, she had to wear a special corset made of metal or plastic to keep her spine straight. She had to wear special shoes to adjust for the deformed leg. The wounds within her deteriorated from time to time causing infections and requiring further surgeries. In her life of 47 years, Frida had undergone at least 32 surgical operations and amputation of toes and one of her legs. ﻿
Her life from the day of the accident until her death, twenty-nine years later, was filled with constant pain and threat of illness. ﻿It was a gruelling battle against slow decay and continuous feeling of fatigue. Pain killers became part of her daily diet. Towards the end of her life, she was drinking two litres of cognac a day to drown her pain, besides taking morphine. She wanted to be a mother but her attempts ended in miscarriages and abortions since her damaged body could not hold the baby.

When she was bedridden after the accident, her father gave her brush and paint and a special easel which was attached to her bed. Since the plaster cast did not allow her to sit up, she had to paint while lying down. She wrote, “I began to paint during convalescence from an automobile accident that forced me to stay in bed for almost a year. During all these years I have worked with the spontaneous impulse of my feeling. I have never followed any school or anyone’s influence, I have not expected to get from my work more than the satisfaction of the fact of painting itself and of saying what I could not say in any other way. Since my subjects have always been my sensations, my states of mind and the profound reactions that life has been producing in me, I have frequently objectified all this in figures of myself, which were the most sincere and real thing that I could do in order to express what I felt inside and outside of myself”.

﻿“I was not permitted to fulfill the desires which the whole world considers normal, and nothing seemed more natural than to paint what had not been fulfilled. My paintings are the most frank expression of myself, without taking into consideration either judgments or prejudices of anyone”.

﻿Three concerns impelled her to make art, she told a critic in 1944: her vivid memory of her own blood flowing during her childhood accident; her thoughts about birth, death, and the “conducting threads” of life; and her desire to be a mother.

Frida poured out her suffering and transmuted her pain in paintings which became her biography. “I paint myself because I am so often alone,” Frida said, “because I am the subject I know best.” Dramatization of pain became her central theme in paintings. She became her own model. She spent long hours scrutinizing her reflection in the mirror and reproducing that reflection.

Frida had made some two hundred paintings, mostly self- portraits. Exhibition of her paintings were held in New York and Paris besides Mexico City. Louvre had acquired one of her paintings. Her works have been declared as part of national cultural heritage by the Mexican government.

Frida had a remarkable mental strength with which she overcame her chronic suffering and tried to live a full life. She hid her grief with outward cheerfulness and loud laughter. She refused to be confined by the dictates of the bodily pains and handicaps. Even when she was very sick and when doctors had prohibited her moving out of the bed, she went in an ambulance to the gallery hosting exhibition of her paintings in Mexico City. She was carried on a stretcher from the ambulance to the special medical bed installed in the gallery. Lying down in a colourfully decorated bed, she interacted with guests and joined the party singing and celebrating. During another period of illness, she went in a wheel chair to participate in a political protest in Mexico City.

She married the famous Mexican muralist Diego Rivera in 1929. She was 22 and Rivera was 43, twice married and divorced.  She was petite (5’3”), light (44 kilos in weight) and pretty while he was a huge man over six feet in height, 130 kilos in weight and was somewhat monstrous in appearance. She used to do paintings in small canvasses while he used to paint large murals on walls standing on scaffolds. It was like a classic case of beauty and beast.﻿ It was she who took the first step of reaching out and seducing him. She went to the site where he was doing mural work and asked him for his assessment of her painting. She told him openly that she knew his reputation as a womanizer and asked for an objective view. He was taken aback but liked her instantly for her courage, boldness and artistic talent.  But after the marriage, Rivera continued many affairs despite Frida’s fierce fights. He had affairs even with her own sister. Frida hit back and took revenge on Rivera by paying him back in his own coin. She started having a number of lovers including his friends both men and women. Her famous affair was with Trotsky, the Russian communist leader who took asylum in Mexico City to escape Stalin’s persecution. Frida and Rivera ended their marriage with divorce in 1939. But they remarried in 1940. Despite his irrepressible infidelity, Rivera loved and cared for Frida. He admired her independent spirit and courage. ﻿Her candor disarmed him. Her odd mixture of freshness and unmasked sexuality tempted him. Her spunk and mischief appealed to his own boyish prankishness. On her part, Frida had loved him and taken care of Rivera in a motherly way forgiving his sins.

Frida wore colourful costumes and jewellery drawing inspiration from the native Mexican cultures. She dressed in flamboyant clothes and accessories causing a sensation wherever she went. With her Mexican dress, she stood out from her compatriots who were copying European fashion. The extravagant dress was also a clever way to hide and distract attention away from her scars and her handicaps. Ribbons, flowers, jewels, and sashes became more and more colorful and elaborate as her health declined.

Frida’s vocabulary was equally colourful both in speaking and writing. She used the choicest abusive words and liked to shock the cultured and refined elite. ﻿She loved to use foul language—words like pendejo (which, politely translated, means idiotic person) and hijo de su chingada madre (son of a bitch). She enjoyed the effect on her audience, an effect enhanced by the fact that the gutter vocabulary issued from such a feminine-looking creature, one who held her head high on her long neck as nobly as a queen. In her letters she calls Paris as Pinchissimo (most vile) Paris. She says, “ ﻿I rather sit on the floor in the market of Toluca and sell tortillas, than to have anything to do with those “artistic” bitches of Paris. ﻿They sit for hours on the “cafes” warming their precious ﻿behinds, and talk without stopping about “culture” “art” “revolution” and so on and so forth, thinking themselves the gods of the world, dreaming the most fantastic nonsenses, and poisoning the air with theories and theories that never come true. Next morning—they don’t have anything to eat in their houses because none of them work and they live as parasites of the bunch of rich bitches who admire their “genius” of “artists.” shit and only shit is what they are”.

Frida died at the age of 47 in 1954. Her legend lives on as an admirable icon of extraordinary strength, courage and resilience. Frida’s life story has inspired books, movies, plays and ballets.

The art and life of Frida have been portrayed elaborately and sensitively by Hayden Herrera in the book Frida: A biography of Frida Kahlo published in 2018. Herrera, an American art historian and biographer has brought out ‘the extraordinary qualities that marked Kahlo as a person and as a painter: her gallantry and indomitable alegría (joy) in the face of physical suffering; her insistence on surprise and specificity; her peculiar love of spectacle as a mask to preserve privacy and personal dignity’.

The colourful Frida wore Indian saree too, one day in the summer of 1947. Nayantara Sahgal and Rita Dar, the two daughters of Vijaya Lakshmi Pandit (who was later ambassador to Mexico in 1950-51), visited Frida in her house called as La Casa Azul (Blue House) during their vacation in Mexico City. They dressed her up in a saree and she loved it. She gifted them her autographed photos.

Some Indians describe Amrita Sher-Gil as the “Frida of India”, based on some similarities between their works. But this comparison does not do justice to either of the artists since the contrasts and differences in their lives are enormous as against a few common themes in their paintings.