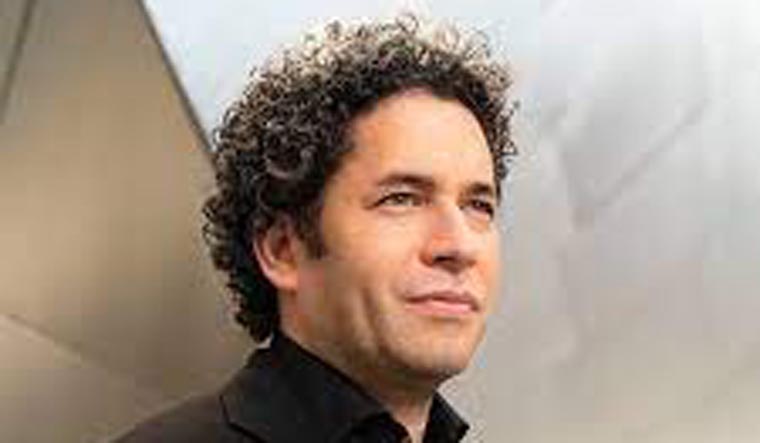 Gustavo Dudamel,  the renowned Venezuelan music conductor, has been appointed as the director of the Paris Opera this week. He will continue his current job as musical director  of the prestigious Los Angeles Philharmonic which hired him in 2009 when he was 28-years-old. He is also the music director of the Simón Bolívar Symphony Orchestra of Venezuela. He has conducted  the Vienna State Opera in 2016 and the New York Met in 2018. He has become one of the most famous and sought-after conductors and an iconic brand in the world of classical music. He is a rare classical artist to have crossed into pop-culture celebrity as a superstar conductor. He has won a Grammy award, among other honours and awards. He has appeared in Superbowl half time with the pop band Coldplay. He has invigorated the sometimes staid world of classical music with his refreshing youthful vibrancy and electric performances.

Dudamel was born in Barquisimeto, Venezuela in 1981. His parents were both musicians. His father played trombone in a salsa band, and his mother gave singing lessons. Dudamel, a child prodigy, was enrolled in the El Sistema at the age of five. Although the boy wanted to play the trombone like his father, his arms were too short and so he took up violin. He studied music composition and conducting. He took to mock conducting of music at the age of 11. He was assistant conductor of Barqusimito Youth Orchestra at the age of 13. He was spotted and mentored by José Antonio Abreu, the founder of El Sistema. Abreu, who also grew up in Barquisimeto, took Dudamel under his wing and focused in making a conductor of him. Dudamel toured the world with the Simón Bolívar Symphony Orchestra, a group of the best musicians in all of El Sistema. At the age of eighteen, he was appointed as Director of Simon Bolivar Orchestra of Venezuela. He became famous after winning a competition in Germany in 2004. As his fame spread, he was invited to conduct in Germany, Italy and Austria.

El Sistema was founded in 1975 by Venezuelan conductor and educator José Antonio Abreu. He had studied economics as well as music, and served in the Venezuelan congress briefly. He had a vision to take the elite classical music to the poor children. Besides giving access to high culture to the underprivileged he believed that collective work through orchestras would inspire a social transformation in the community especially in the slum areas. He was convinced that classical music would occupy young people with music study and instill values that can come from playing in ensembles: a sense of community, commitment and self-worth. This is especially important for children in slums exposed to criminal gangs, drug trafficking and violence.

Abreu started a new youth orchestra and held the first meeting of the orchestra in a parking garage with few teenagers. Within a year, he had built an ensemble, and took it to a festival in Scotland and won critical praise for his work. After the success of the programme in Caracas, he opened centres (nucleos) all over the country. In 1995, Abreu was appointed Special Ambassador for the Development of a Global Network of Youth and Children Orchestras and Choirs by UNESCO. Sir Simon Rattle, director of the Berlin Philharmonic said in a statement in 2011,  "What Abreu and El Sistema have done is to bring hope, through music, to hundreds of thousands of lives that would otherwise have been lost to drugs and violence." El Sistema has proved to be a programme of social rescue and cultural transformation for thousands of children from poor neighbourhoods in the country".

Abreu persuaded successive governments (both conservative and leftist) to finance El Sistema. President Chavez saw it fitting with his Bolivarian Revolution and 21st Century Socialism and extended generous financial support. “Revolutionary Venezuela is aware of the infinite value of music as a bastion in the fight for equality and happiness,”  Chávez wrote in a 2011 letter to Abreu. Private foundations stepped in with donations. The Inter American Development Bank extended grants and credit for building of regional centres of El Sistema in Venezuela. The Bank has praised the program after studying its impact through an interdisciplinary group. According to the study El Sistema has helped the children improve their capacity to control their attention, behavior and emotions besides showing lesser aggression and improvement in relations with peers.

El Sistema provides free classical music training during after-school hours in the afternoons. It organises orchestras with children and teenagers (between the ages of 2 and 18) many of whom are from poor families. The system provides musical instruments. Talented and interested adolescent students are trained to become teachers and encouraged to open new centres. The most remarkable feature of the system is its instant immersion. The children begin playing in ensembles from the moment they pick up their instruments. They enjoy the novelty of playing instruments they cannot afford to buy and feel spiritual uplift from the soothing classical music in their neighborhood filled with the noise of gunshots and screams. The parents and neighbors of the kids in El Sistema, who cannot imagine going to the theaters for classical music performances, are fascinated by the opportunity of exposure to the high culture within their community. They are proud of the performance and achievements of the students of El Sistema.

El Sistema has trained over a million students. It operates 442 centres and 1722 orchestras with more than 5000 music teachers. The students, depending on talent and ambition, advance to statewide orchestras, with the younger ones in children’s orchestras and those in their late teens and 20s in youth orchestras. The best are selected to join the national Bolívar Youth Orchestra. Some alumni of El Sistema have gone on to distinguished careers in famous orchestras around the world.

El Sistema has inspired a number of similar projects in two dozen countries including US, UK, Canada, Spain, Bolivia, Philippines and South Korea. There are nearly 200 Sistema-inspired programs in the United States. El Sistema USA was founded in 2009. There are books, documentaries and academic studies about the El Sistema programme. Here is a link to one of the documentaries made in 2010 “Dudamel: Let the children play”.

Dudamel attributes his success to ‘El Sistema’ and misses no opportunity to express his gratitude to his mentor Abreu, who passed away in 2018. "He [Abreu] created this beautiful and huge program that is unique," Dudamel said. "We are his sons, we have his blood in our veins, and it's not just about music, it's about building the society and creating better citizens." Dudamel carries on his mentor’s torch by continuing to work with youth orchestras around the world encouraging and inspiring the young. In Los Angeles, Dudamel has contributed to the development of Youth Orchestra Los Angeles (YOLA), created by the Los Angeles Philharmonic after hiring him.

As a Venezuelan celebrity in the global stage, Dudamel could not avoid raising his voice about the political crisis in Venezuela. He issued a statement after an 18-year-old El Sistema-trained viola player, Armando Canizales was killed during a street protest in 2017. He said,” I raise my voice against violence and any form of repression. Nothing justifies bloodshed. We must stop ignoring the just cry of the people suffocated by an intolerable crisis. I urgently call on the President of the Republic and the national government to rectify and listen to the voice of the Venezuelan people.

He followed up his statement with an op-ed in New York Times on 19 July 2017 saying, “ In the past, I have fought the urge to enter the political discourse, believing that it was not my role. I am not looking to take sides; I am willing to take a stand. My country is living through dark and complicated times, following a dangerous path that may lead us inevitably to the betrayal of our deepest national traditions. Venezuelans are desperate for the recognition of their equal and inalienable rights and to have their basic needs met”.

Predictably, the Maduro government was upset and cancelled Dudamels’ planned international tour with the Simon Bolivar Orchestra in 2017. President Maduro mocked Dudamel in a televised appearance saying,  “Welcome to politics, Gustavo Dudamel. But act with ethics, and don’t let yourself be deceived into attacking the architects of this beautiful movement of young boys and girls.”

But the government has let Dudamel continue to hold the post of music director of the Simón Bolívar Symphony Orchestra of Venezuela. While he has not been able to perform with the orchestra since then, he still works with it remotely and has sometimes met members of the group outside Venezuela. During the pandemic he has had sessions with them over Zoom. Dudamel has now become a Spanish citizen after his second marriage with a Spanish actress Maria Velarde. His first wife Eloisa Maturen is a Venezuelan actress and journalist.

Dudamel believes firmly in the El Sistema philosophy about the role of music in social transformation especially for young people from the poor communities. He has created the Gustavo Dudamel Foundation with the goal “to expand access to music and the arts by providing tools and opportunities for young people to shape their creative futures.”

The Bolivarian Revolution of Chavez is stuck in a systemic crisis at this moment with political, economic and humanitarian problems. But the musical revolution of El Sistema has been a spectacular success story. Venezuela will become a better country if the politicians of the country learn from El Sistema and play harmoniously like members of the Simon Bolivar Orchestra directed by Dudamel. They should listen to Dudamel’s words, “As a conductor, I have learned that our society, like an orchestra, is formed by a large number of people, all of them different and unique, each with his or her own ideas, personal convictions and visions of the world. This wonderful diversity means that in politics, as in music, no absolute truths exist”.