The adventurous life of Pablo Neruda 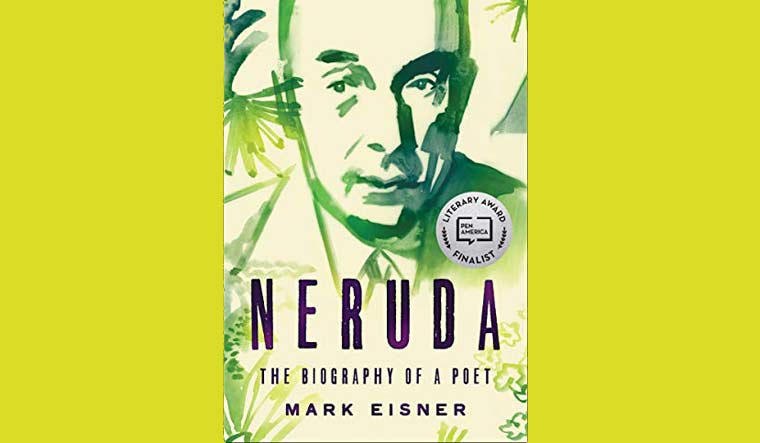 Pablo Neruda from Chile was one of the greatest poets of the twentieth century in Spanish language. He was awarded the Nobel Prize for literature in 1971.

Mark Eisner, the biographer, had spent two decades working on projects related to Neruda. He has translated Neruda’s poems in English, written articles and books and produced a documentary on the poet. With this background and confessing that ‘his life was saturated by Neruda’s poetry’ Eisner has brought alive the remarkable life story of Neruda.

Neruda was a ‘people’s poet’ appealing to ordinary people such as workers and miners, besides intellectuals. He read his poems in election campaigns, factory visits and to masses in sports stadiums. His love poems are quoted by lovers in Latin America even now. His anti-fascist poems were read in the front lines of the Republican fighters during the Spanish civil war. In ‘Canto General’, Neruda constructed himself as the poet of the Americas.

He wrote his first poem at the age of 11. ﻿At the age of 20, he became famous after the publication of Twenty Love Poems and a Desperate Song which would go on to become one of the most popular books of poetry in the world. By 1972, two million copies had been sold in Spanish alone, with far more sold in translation. More than ten million copies are estimated to have been sold worldwide.

Neruda had an adventurous and colourful life as a bohemian, diplomat, politician, communist and anti-fascist fighter. He had to secretly run away from his country into exile on horseback through the Patagonian forests of Chile into Argentina to avoid arrest by the Chilean authorities. He had three wives, many lovers and numerous affairs. He socialised with great artists like Pablo Picasso and Diego Rivera as well as with famous writers of his time. He had travelled around the world and collected masks and sea shells, among other things, which are displayed in his houses converted into museums in Chile.

Since his poems did not earn him enough income in the beginning, he needed a day job for survival. Through some contacts, he managed to get appointed as consul in Rangoon at the age of 23 in 1927. Next year he was transferred as consul to Colombo and in 1930 he went to Batavia (now Jakarta, Indonesia) as consul. In 1933, he was posted as consul at Buenos Aires, Argentina. Here he flourished as a literary celebrity and used the diplomatic status to reach out to the Argentine literary and cultural circles. The consul general of Chile, Socrates Aguirre told him “You will be responsible for making the name of Chile shine by establishing friendly relations with writers and intellectuals. Your job is culture”. In 1934, he was posted as consul in Barcelona and later in Madrid. ﻿When Neruda assumed his post in Spain, Chile’s consul general, Tulio Maquieira, directed him: “You are a poet. Please dedicate yourself to being a poet. You don’t have to come to this consulate. Tell me no more than where I can mail you your check each month.” In 1940, he was named as Consul General in Mexico City. In 1971 he was posted as ambassador in Paris, a dream came true.

He won a seat in the Chilean senate on the leftist ticket in 1945. He was considered as a candidate for presidential elections in 1970 but he stood down in favour of the professional politician Allende. He was a Communist and clung to his Stalinist views even after the horrors of the gulag were revealed. Later, he admitted his error of pro-Stalin position. He was an admirer of Cuban revolution until the pro-Castro literary circle turned against him. He was a cheerleader of the Republicans against Franco during the Spanish civil war. He helped thousands of Spanish refugees to travel to and get asylum in Chile.

Despite his communist leanings, Neruda liked the luxuries of life. He had bought and built expensive houses and enjoyed partying and travel. His rightwing critics labelled him as a “Champagne Communist.” Neruda was conscious of the contradictions and complexities within him, from the shockingly shameful to the inspiringly heroic.

Neruda says that it was not he who found poetry but it was poetry which found him. He writes in Memorial de Isla Negra:

where it came from, from winter or a river.

I don’t know how or when,

but from a street it called me,

from the branches of night,

abruptly from the others,

there it was, without a face,

and it touched me.

Eisner makes an interesting point that Neruda’s career as a poet was nurtured by Chile which has a long cultural history of reverence for poetry. Poetry was ingrained in the culture of Mapuches, an indigenous tribe. From the early sixteenth-century epic poetry of Alonso de Ercilla to the strong roots of oral poetics in indigenous Mapuche culture, Chile has earned its reputation as a “nation of poets,” where poetry is not only enjoyed by the elite, but also recited by campesinos, factory workers, miners, and ordinary people around their campfires or kitchen tables. This unique environment nurtured Neruda’s passion for poetry from the beginning.﻿ ﻿Tiny towns in the middle of nowhere would have poetry contests as part of their fairs. In 1919, at the age of fifteen, Neruda traveled north some 250 miles by train, probably alone, to read a poem in the tiny, dusty town of Cauquenes. He took third prize for best poem at the Maule Flower Games. ﻿The importance of poetry in the Chilean culture allowed Neruda to gain popular recognition early on, which eventually evolved into widespread fame.

In a 1970 interview for the Paris Review, Neruda said Chile has an extraordinary history. Not because of monuments or ancient sculptures, which don’t exist here, but rather because Chile was invented by a poet, Don Alonso de Ercilla y Zúñiga . . . a Basque aristocrat who arrived with the conquistadores—quite unusual, since most of the people sent to Chile came out of the dungeons. ﻿De Ercilla, “the young humanist,” wrote La Araucana on scraps of paper as the Spanish troops pursued the native people in the forests and towns around Temuco, the region from which the poem’s name derives. Neruda described the poem as “the longest epic in Castilian literature, in which he honored the unknown tribes of Araucania—anonymous heroes to whom he gave a name for the first time—more than his compatriots, the Castilian soldiers.” Published in full in 1589 and then translated throughout Europe, it is still considered one of the great masterpieces of the Spanish Golden Age.

Besides these anthropological explanations, there are social factors that were also of great importance. Chile’s poetry is rooted in the remarkable oral storytelling tradition of the Chilean campesino, the mine worker, the factory worker, ﻿the proletariat of the country. Stories told through verse were passed down in front of a fire, from one generation to another. At the turn of the twentieth century, northern miners would break into poetry readings at social gatherings. In the early twentieth century, coinciding with Neruda’s coming of age, poetry in Chile served as an art that was accessible to people who were poorly educated. They were the principal audience for the poets, more so than those in the high-society literary salons. Poetry was not perceived as elitist but as an art form with wide appeal. ﻿

Eisner says that Chile has an extraordinary concentration of poets, of all levels of brilliance, per capita. ﻿Chile is still unique as a “nation of poets”. Chile is the only Latin American country to get two Nobel prizes for literature out of the total of six for the region. While the other Latino Nobel Laureates are novelists, the Chilean winners are both poets. Gabriela Mistral, the Chilean poet, was the first ever Latin American Nobel laureate for literature when she won the prize in 1945. Neruda had met her and showed his poems to her when she was posted as headmistress of a school in his home town Temuco. She had encouraged him, impressed by his potential.

Fortunately, Neruda died on 23 September within two weeks of Pinochet’s coup on 11 September. This spared him from humiliation and possibly torture and even killing by the dictatorship. The military ransacked and damaged his houses and also arrested, tortured and murdered his leftist friends.

Neruda had visited India for the first time in 1928 during his consulship in Colombo. He attended a conference of the Indian National Congress in Calcutta, as a visitor. He met Gandhi and Nehru among others. He does not have much to say about India’s freedom struggle or the non-violent method pursued by Gandhi. He describes Gandhi’s ‘sharp profile like a very cunning fox’.

During his second visit in 1950 he met Prime Minister Nehru. But he was upset by the waiting in Nehru’s office and his cold and indifferent attitude during the meeting. Neruda was also agitated by the suspicious checking of his luggage and documents by the Indian Customs officers because of his credentials as a Communist. In protest, he cancelled his plan to visit Taj Mahal and preponed his trip back to Paris.

Neruda was caught in a controversy of ‘plagiarism’ by his critics who accused him of copying Tagore’s lines in one of his poems. Texts of the two poems were published side by side on the front page of the cultural magazine Pro’s November 1934 issue, under the title “El affaire Neruda-Tagore”.

Tagore: You are the evening cloud floating in the sky of my dreams. I paint you and fashion you ever with my love longings. You are my own, my own, Dweller in my endless dreams! Neruda: In my sky at twilight you are like a cloud and your color and form are as I love them. You are mine, you are mine, woman with sweet lips,

The rest of Neruda’s poem continues to be very similar to that of Tagore, who was one of Neruda’s favorite poets in his student days. In reaction to this accusation, Neruda said that yes, he had borrowed from Tagore, but he insisted that it wasn’t plagiarism but rather a “paraphrase” of Tagore’s poem. ﻿In the fifth edition of Twenty Love Poems, released in 1937, Neruda states at the beginning of the book that Poem XVI was, “for the most part, a paraphrase of Tagore’s ‘The Gardener’. He then writes, “This has always been known publicly”.

It is odd that Neruda did not visit Shantiniketan nor mention Tagore during his 1928 visit to Calcutta, despite his self-admitted admiration for Tagore's poetry.

Neruda was indifferent to Indian as well as Asian culture, literature and philosophy. He never explored the Asian heritage during his stay in Rangoon, Colombo and Jakarta. He writes in his Memoirs ( which I have read), “ The orient struck me as a large hapless human family, leaving no room in my conscience for its rites and gods”

He mentions in his memoirs how he raped a Tamil woman servant of pariah caste in his house. He describes how she looked like one of the 1000-year-old sculptures from the south of India. He says it as a routine detail of his stay in Colombo, without hiding his racist attitude. Eisner, the biographer, has pointed out this contradiction in the context of Neruda’s embrace of the downtrodden and Latin American natives subjected to conquest and domination by the European colonisers.

During the visit of Chilean President Lagos to India in 2005, I (as Head of the Latin America Division in the Ministry of External Affairs} had quoted a poem of Pablo Neruda in the draft banquet speech of the Indian President. But the External Affairs Minister cut out the quotation. He disliked Neruda because of his unkind view of India. But this Indian experience should not diminish in any way the greatness of Neruda as a poet.