Ved Mehta: From a blind child to a celebrity writer

Mehta, a New Yorker columnist and author of 27 books, died on Jan 9 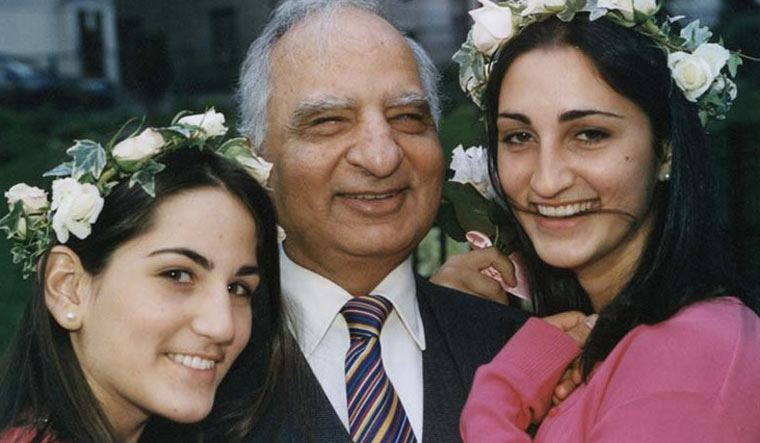 Ved Mehta with his daughters | via vedmehta.com

Indians go to the US for higher education, jobs and some of them to settle down in the Promised Land. But Ved Mehta, who became blind at the age of three, went to the US for a different reason in 1949 when he was 15. In his own words, “I constantly dreamed of and worked on getting out of India and making my way to the West, where my disability would not be perceived as a barrier to education”. He got admission in a school for the blind in Little Rock, Arkansas. He went to Harvard and Oxford universities for higher studies. He settled in New York and became an American citizen in 1975. He was a staff writer for New Yorker from 1960 to 1993. Besides writing, he taught in Yale and New York universities.

He started writing for New Yorker magazine when was a college student. He published his first book, an autobiography, when he was 23. He says that he wrote it out of a feeling that he could partly alleviate a life of deprivation, by writing about it. He was proud that he had earned his livelihood with his pen, since his 20s. His chosen method for improvement of his writing was to read and reread works of masters such as William Shakespeare and John Milton.

Mehta is the author of 27 books of fiction and non-fiction, covering a variety of themes such as Indian politics, Oxford Dons and American education. He has written a monumental autobiography 'Continents of Exile', in twelve installments between 1972 and 2004. He calls it as a cross- cultural story of India, England and US.

Mehta became blind at the age of four due to meningitis. Since then, his life was about overcoming the disability. He says, “I had to prove every day to everyone that I was able to do things that they thought I could not do. Whenever people tried to help or protect me, they jarred my self-confidence and dulled my senses”. To prove to others, he drove cycle in his childhood and car in his youth to impress his date, much to the consternation of others.

Every day of his life was struggle for him, as he admits, “There was hardly a day that I did not feel defeated, condescended to and humiliated- when I did not long to be spared the incessant indignities that assailed me”. Reliance on his own will to overcome his disability made him feel lonely and the pain of loneliness was unrelenting.

He compares himself to those blessed with eye sight saying, “I was in the grip of the fantasy that I could see. Even then I maintained the habit of checking external reality. I never accidentally walked off a cliff, for instance. Without such continual checking, I could not have survived in the sighted world. But the sighted can think what they like about the blind without feeling the need to check the reality of the blind. Every moment, I instinctively translated into images any and all information received by my sharpened senses. I was creating my own reality, seeing things in my own way- only imagining that what I saw was identical to what other people saw”.

He sought romantic relationship during his college years but found that girls were prepared to be friends with him but generally spurned any romantic overtures. It was only after he started writing and publishing that girls took romantic interest in him. He has written about his romance and muses in the book 'All for love'.

In his website, he says, " Deprivation often makes a writer".

I am inspired by his life story and achievements. As I struggle with my own amateurish occasional writings, I am encouraged by his statement,"Some forty years after I published my first book I am struggling with words and sentences, drafts and alterations. I was constantly tempted to put off writing, a process which is turbulent and involves a lot of angst."