Sugathakumari, the ‘greenest’ poet of Kerala who fought for nature and women 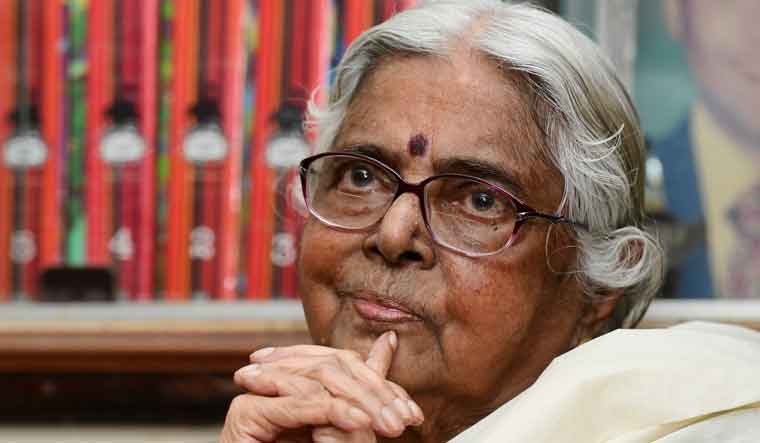 [File] Sugathakumari was many things to different people and was complete in whatever she did | R.S. Gopan

"Plant a banyan tree, if you want to remember me after I am gone... Please don't write anything on or near it. Do not keep even my ashes there. Let birds come and eat the fruits, that's all I want," Sugathakumari, one of the most renowned poets and green activists in Kerala, cannot have said anything else when asked how she wanted to be remembered. She had also located a spot to plant the tree—at the backyard of Abhaya, the home she had begun for destitute women and people with mental illnesses.

The celebrated poet breathed her last Wednesday morning due to post-COVID complications. She had tested positive for the coronavirus just a day before. She was 86.

Sugathakumari was the second daughter of Gandhian Bodheshwaran and Sanskrit scholar V.K. Karthiyayayani.  Her sisters—Hridayakumari and Sujatha—were also well-known writers and poets. She is survived by a daughter.

Sugathakumari's life cannot be bracketed into a single box. She was many things to different people and complete in whatever she did.

Her entry into poetry, like many women in the 50s, was under a pseudonym. But within a few years, she established as a poet under her real name and a decade later, won her first Kerala Sahitya Akademi award for Pathirapookkal (Flowers of Midnight). A decade later, she won the Kendra Sahitya Akademi Award for Raathrimazha (Night Rain). Her other famous poems include Paavam Maanavahridayam (Poor Human Heart), Thulaavarshappacha (Green Monsoon), and Radha Evide (Where is Radha). She has won many prestigious awards, including the Odakkuzhal Award in 1982, Vayalar Award in '84, Asan Prize in 1991, Lalithambika Sahitya Award in 2001, Ezhuthachan and Basheer Awards in 2009, among many others. Most recently, she won the ONV Literary Award in 2017 and Kadammanitta Ramakrishnan Award in 2019.

Kerala witnessed her activism phase when she became one of the most active campaigners of the Save Silent Valley Movement as it took shape in the 1980s. Silent Valley, home to many endangered species, including lion-tailed macaque, was chosen to host a hydroelectric dam by the Kerala State Electricity Board. Environmentalists all over the world fought against the proposal that would destroy one of the greenest spots on Earth and Sugathakumari's presence forced the government to buckle down. She had written a poem–Marathinu Sthuti (Hymn to a Tree)—which was recited at every venue to save the Silent Valley.

By the 90s, she became more of a social activist. In 1992, she started 'Abhaya', a home for destitute women and a daycare centre for people with mental health issues. It also provided shelter to children in distress and women who did not find their own homes safe. She was appointed the first chairperson of the Kerala State Women’s Commission in 1996. She was awarded Padmashree in 2006.

Sugathakumari was leading a kind of retired life for the past decade, withdrawing from public gatherings. But in 2018, when five nuns protested in Kerala's Ernakulam against a bishop accused of raping their colleague, the activist in her got better off. The 84-year-old had then come out of her silent mode and sat along with the protestors. "It was my duty to be with them," she had said then.

Though Sugathakumari had been close to many literary personalities who were actively part of politics, she had never been part of any mainstream political parties—a rarity, considering the highly volatile nature of Kerala's sociopolitical scenario. She had always considered Mahatma Gandhi and Swami Vivekananda as her gurus.

According to those close to her, Sugathakumari has left without fulfilling one wish—to visit the Silent Valley, the very green spot, which, to a large extent, owes its survival to her—once again. Her family and associates, however, are determined to plant a banyan tree as per her wish and to see it grow and become home to hundreds of birds and animals—a befitting memory for a soul who lived for Mother Nature.