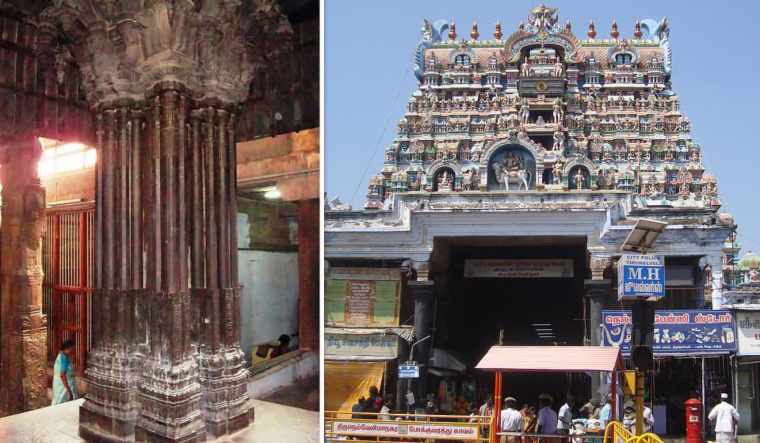 What are musical pillars?

They are a group of stone shafts that produce musical notes of varying frequencies when tapped with a finger or wooden mallet. These pillars are of two kinds: 1) Beating/Tapping pillars and 2) Blowing pillars. While the first kind produces sound when tapped, the second kind, which is most likely hollow, works like a wind instrument. The tapping pillars are further classified into three categories: Shruti, Gana and Laya. It is suggested that shruti produces swaras, gana produces classical ragas, and laya produces taal when tapped.

If you are wondering how to identify these pillars, it is not all that onerous. Musical pillars are narrow yet firm in form, clamped at the ends, drawn out of a single block of stone, bereft of carving. According to scholars, they are usually arranged in groups (between 3 and 56) around a central pillar which supports the roof of the structure. The central pillar could vary in height, but the cluster pillars are of the same height with varying girth and shape.

National award-winning scientist H.V. Modak referred to these pillars as ‘Stone Pianos’ in a paper on Sahapedia, assigning them to the Vijayanagar period (14th–16th centuries), while scholars M.G. Prasad and B. Rajavel believe they might have begun surfacing as early as the 5th century—the Tirunelveli Nellaiappar temple in Tamil Nadu—but mostly during the 14th–16th centuries.

So why was there an influx of musical pillars for 200 years?

It is said that these pillars were tapped or blown like musical instruments to accompany chants and devotional performances in the temples. The possible reason for their prevalence in the ‘medieval’ temples of the South could be the multiple halls (maṇḍapa)—sculpture gallery, musical pillar hall, performance hall, etc.—which became an intrinsic part of massive temple complexes, a layout which out-shadowed the concept of single maṇḍapa.

What influenced the peculiar acoustics was either the rock type or the clustered arrangement of the columns. According to the Śhilpa Śhāstras, rocks are masculine, feminine and neuter based on their sound and colour. The male rock produces the tinkle of bronze bells, the female of bass and the neuter produces a dull sound. It is possible that the pillars are musical because they are carved out of rocks with acoustic properties—diabase rocks (black granite) or rocks rich in silica and metallic ore. Such rocks are called singing or lithophonic rocks.

However, in an experiment carried out at various temples with musical pillars, Modak realised that the arrangement of the clustered pillars in the wall-less maṇḍapas also played a role in lending sound to the pillars. In a cluster, when a pillar is tapped, other pillars with same frequency vibrate with resonance making the group a musical instrument, fit to accompany hymns and performances composed in three–five notes. It is interesting to note that all the shafts from the cluster do not emit musical notes, only the ones on the outside were tailored to produce music.

Where to find them?

Not known to many, the mahāmaṇḍapa (main hall) of Hampi’s Vitthala temple boasts a cluster of 56 such pillars; 40 of them forming an aisle, the remaining forming a rectangular cluster in the centre. The tall pillars of the ‘musical hall’ are carved with beautiful ends. It is said that the granite monoliths produce sounds of seven notes, percussion instruments such as tabla, veena, mridanga, damaru, ghatam, and bells and conch-shells once struck with one’s hands.

Several temples in the South are executed with architectural elements such as pillars, stairs and icons that produce music. One such temple is the 16th-century Kanchipuram Varadharaja Perumal. This temple is well-known for its 100-pillared hall, a sculpture gallery depicting scenes from Ramayana and Mahabharata. It has been suggested that the sculptures of this gallery produce sounds of metals such as gold, copper and silver; tambura, an Indian musical instrument; and chains when tapped, a relatively unknown fact. Do not miss the musical sculptured pillars and monolithic chains with movable links suspending from the eaves, the next time you visit the Varadaraja Perumal temple.

Often, as camera-wielding tourists, we don’t notice other elements that architecture has to offer. Many, like these musical pillars, haven’t been explored as much either. Interestingly, the feature seems to be unique to a handful of these South Indian temples, which make them an even more prized aspect of Indian architecture, and definitely worth checking out in person.

This article is part of Saha Sutra, on www.sahapedia.org, an online resource for Indian arts, culture and heritage.