Géza von Habsburg on the legacy of the Fabergé egg

There are Easter eggs and then there are Fabergé eggs 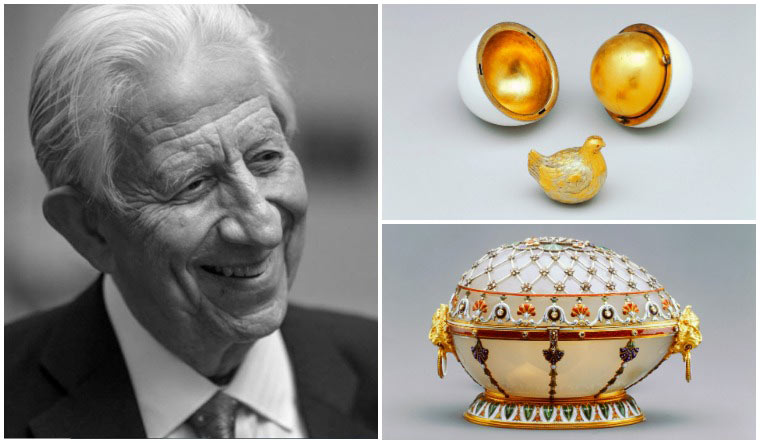 One hundred years ago, communism killed one of the greatest jewellers to be born in Russia. For the longest time, Peter Carl Fabergé (1846-1920) was the most cherished goldsmith to the Russian Tsars until World War I, the Bolshevik revolution of 1917 and the death of monarchy forced the celebrated jeweller and designer into exile. They say Peter Fabergé died of a broken heart on 24 September 1920 in Switzerland.

During his heyday, between 1882 and 1917, the House of Fabergé is reported to have produced some 150,000 objects like Christmas ornaments, cigarette cases, brooches, photo frames, and boxes, etc. 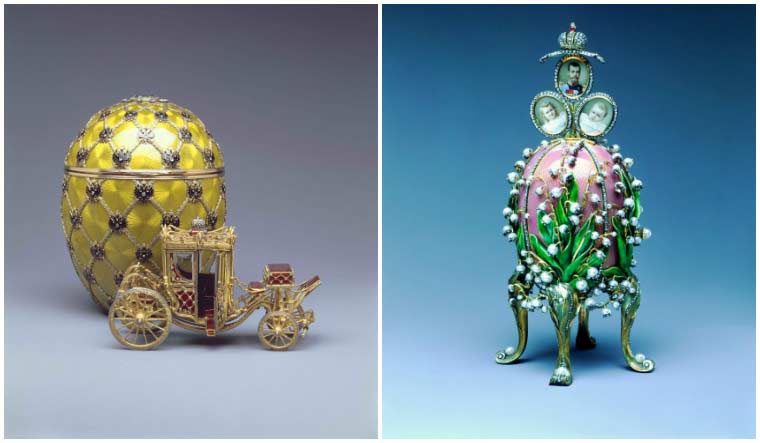 But, the most admired objets de fantasie by the master-jeweler remains the Imperial presentation eggs. The exquisite bejewelled eggs have remained synonymous with the name of the company as it was Peter Fabergé who created the famed series of 50 Imperial Easter eggs for the Russian Imperial family from 1885 to 1916. Some of these eggs were in fact sold off by Joseph Stalin in 1927 to acquire more foreign currency. Between 1930 and 1933, some 14 Imperial Easter eggs were traded off, According to Dr. Géza von Habsburg, world-renowned Fabergé expert and curator, Armand Hammer from the United States managed to snag most of Fabergé eggs at the time.

"A great entrepreneur, president of Occidental Petroleum and personal friend of Lenin, his father was the founder of the Communist party in the United States," wrote Habsburg once.

In an email chat with THE WEEK on the 100th death anniversary of Peter Carl Fabergé, Habsburg traces the journey from the first Imperial egg of 1885 to executing the 'most complicated objet d’art in modern-day history' in 2018 , a second egg comparable to the “Imperial Class”, the many Indian maharajas who were patrons of the House of Fabergé and when the eggs came to town at the National Museum in Delhi.

Q.  What is the origin story of the Imperial Easter Egg collection?

The giving of eggs, considered by many as signs of life re-born, long ago formed part of the ancient spring solstice festival. For the Christian church, which adopted many pagan traditions, eggs represented Jesus’s emergence from the tomb and his resurrection, and - painted red - symbolised Christ’s blood spilled for us.  Eggs made of painted wood, lacquer, glass and porcelain were common Easter presents in the 18th and 19th century.  Fabergé’s first Imperial egg of 1885 was inspired by 18th-century eggs with an enamelled white shell and a gold yolk containing a jewelled hen, of which several examples have survived in royal treasuries. The success of this charming Easter present from Tsar Alexander III to his royal bride started a tradition continued by his son Tsar Nicholas II which was to last 31 years, engendering an absolutely unique series of 50 Easter eggs, 10 during Alexander’s lifetime and 40 eggs created for Nicholas II. Q2. How has the celebrated motif of the egg evolved at the House of Fabergé after the death of Peter Carl Fabergé? What are some of its contemporary iterations?

Russian Orthodox Easter in 1917 was feasted on April 15. At the abdication of Tsar Nicholas on 16 March 1917, Fabergé’s simple birchwood Easter egg for Tsarina Alexandra and the blue glass Easter egg for his mother was still unfinished.

Following the demise of the Imperial family in 1918, Fabergé’s death in 1920 and the upheaval of the old social order at the end of World War I, the creation of luxurious objects came to a total standstill.

The Fabergé brand changed hands a number of times during the next decades and in 1989 was acquired by Unilever of nutrition, hygiene and personal care fame. During their ownership, 97 well-crafted egg-objects were created in limited numbers between 1990 and 2008 under a Fabergé licensing agreement with the German firm of Victor Mayer. 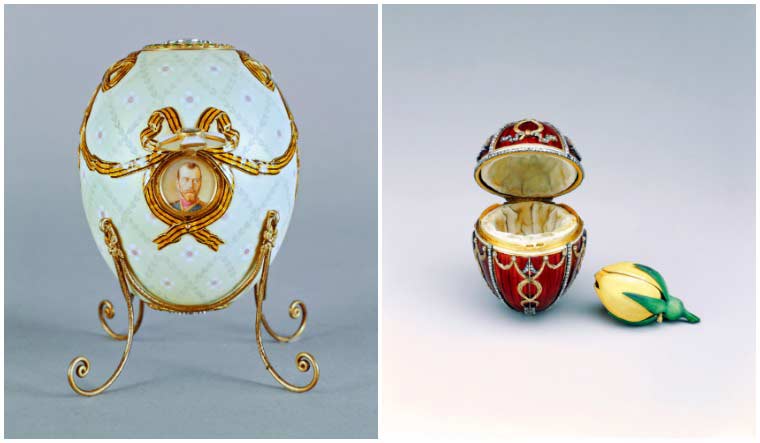 In 2007 Pallinghurst, a South African owned investment group, acquired all the rights to the Fabergé brand with a view of bringing the great Russian house back to its original fame. Fine high jewellery was created in the beginning in 2008. The commission for the firm’s first egg came in 2013, after a hiatus of almost 100 years with The Pearl Egg. Paying homage to the distinguished imperial tradition, Fabergé crafted an extraordinary, one-of-kind egg objet in collaboration with the Al-Fardan family, one of the world’s most renowned collectors of pearls. The Fabergé Pearl Egg draws inspiration from the formation of a pearl within an oyster, and the egg’s painstakingly-crafted mother-of-pearl exterior opens to reveal a unique grey pearl of 12.17 carats, sourced from the Arabian Gulf and exhibiting exceptional purity and a highly unusual shade of grey.

More recently, in 2018, Fabergé partnered with Rolls Royce Motor Cars to create an exceptional egg called the “Spirit of Ecstasy” for a client. Named after the iconic hood ornament that has adorned Rolls-Royce cars since 1911, it is the most complicated objet d’art in our modern-day history and only the second egg to be deemed “Imperial Class” since 1917.

Q3. Was Peter Carl Faberge ever commissioned to design anything for the Indian royalty?

During Fabergé’s lifetime between 1908 and 1917, sales teams were dispatched regularly to India from London to cater to a number of the ruling Maharajas. At least one name has survived in Fabergé’s sales ledgers, that of Maharajah Sir Pratab Singh Bahadur of Jamma and Kashmir, who in 1903 commissioned a gold-mounted rock-crystal stamp box which has survived. The Maharajahs of Bikaner and of Patiala and the Rajah of Pudukkotai are also known to have belonged to Fabergé’s clientele.

Q4. Where can the Imperial eggs be seen in Russia today?

The privately-owned Fabergé Museum in the Shuvalov Palace situated on St. Petersburg’s Fontanka River Embankment, opened 2013, houses over 4000 Russian works of art of which almost 800, including the 9 Imperial Easter eggs formerly in the Forbes Magazine Collection, are by Fabergé.

The State Hermitage Museum in St. Petersburg owns the Fabergé Rothschild Egg, recently given by Vladimir Putin for the museum’s 250th anniversary, together with approximately 100 further objects in different departments.

The Kremlin Armoury Museum in Moscow has 9 Imperial Easter eggs on view when they are not travelling, and approximately 100 other Fabergé objects.

Q5. Has there ever been any talk of bringing the timeless Fabergé collection to India as a touring exhibition?

The Russian Link of Times Foundation, owners of 9 Fabergé eggs formerly owned by Forbes Magazine of New York, lent their collection to the New Delhi Museum between December 2008 and January 2009, together with other 180 priceless objects of art. Reportedly over 700 visitors attended the exhibit. No other exhibitions are planned in the near future although from 2017 we have planned a series of trunk-shows of objet d’art, jewellery and timepieces.

Q6. What is the single-most-important legacy of  Peter Carl Fabergé in the world of modern jewellery? Something that has inspired jewellery designers around the world?

Today, Fabergé offers a wide collection of jewellery, timepieces and objet d’art, including of course egg pendants. We do not copy previous designs but take inspiration from our past to create contemporary pieces. We continue to be inspired by the spirit and ethos of Peter Carl Fabergé and his workmasters to create jewellery and objects for the 21st century. As we remember his passing 100 years ago, his legacy of the artist jeweller lives on. We take forward the concepts of fine craftsmanship, colour, creativity and collaboration not only with our makers but also with our clients.