With gamers stuck indoors, eSports platforms have seen a surge in number of players 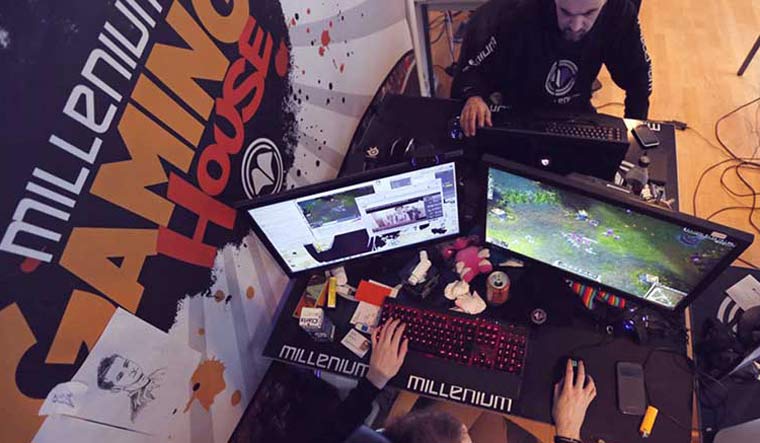 One of the most recent tweets from Nodwin Gaming, one of India's largest gaming solutions companies and a creator of e-sports events, reads thus: "#bored in quarantine? Watch esports on TV! Tune-in to @MTVIndia now! This is your chance to learn from the best, watch in-depth game analysis and breakdown! #quarantine #esports #csgo #esportsmania."

The COVID-19 pandemic has stilled sports stadiums and arenas into silence, with players kept in lockdown. But the quarantine culture has seen a surge in online gaming and sports simulation from stay-at-home fans. Enter eSports, or electronic sports—a digital media format where virtual game-play is streamed as video content, just like football matches, with players raking in millions. In a time of social distancing, self-quarantine and containment, we are left with playing online games and watching other people play them from computer and TV screens at home. Some of the popular titles in the Indian eSports arena include League of Legends, Fortnite, PUBG: Mobile, FIFA 20, Counter Strike: Global Offensive and DotA, among others.

The world of competitive video-gaming was already a billion-dollar industry in 2019, a five-fold increase from 2014. "eSports is a sport because the speed at which a person is reacting to images on the screen is the fastest in the world. The speed at which these kids’ fingers move on a keyboard or on a screen are unimaginably high for anyone else. So it actually comes closest to Formula One, where your hands are on a steering wheel and you're going at 300-400 km an hour with no room for mistakes," says Akshat Rathee, co-founder of Nodwin Gaming which was launched in 2014 and is headquartered in Gurugram. Casual games like Candy Crush or titles online poker, Rathee emphasizes, do not qualify as eSports, which he feels is quite a misunderstood genre of video games.

With the popular gaming tournament DreamHack launching in Mumbai in 2017, India arrived in the international league of eSports, with prize pools seeing a steady upward climb since then. 2019 was a great year for eSports in India, but the worst year of global health in a century has not dented the skyward trajectory of this gaming sector.

"We are seeing a very high demand for our titles. The world is talking about recession and reduction. We are looking at multiple, very high double digit growth for our company," says Rathee, who's seen an 80 per cent jump in traffic for titles in his company in the last one month. With exclusive partnerships with the Electronics Sports League, the eSports World Convention, and others, Nodwin manages prime IPs or gaming events like ESL India Premiership, KO Fight Nights, Dreamhack India, the Intel Extreme Masters qualifiers for India and the Electronic Sports World Cup (ESWC) India Qualifiers. In March, Nodwin Gaming expanded its operations to South Africa, which they saw as a gateway to a larger eSports scene across the continent.

Online gaming platform Paytm First Games recently concluded the largest Clash Royale eSports tournament in India, which saw 11,000 gamers from across the country participate to play the mobile game. The tournament was beamed on the company's YouTube channel and was seen by more than 70,000 users, setting new records, the company claims.

Will eSports survive in an era where other sports cannot? The Intel World Open tournament, which was to showcase eSports in Tokyo just prior to the Olympics planned launch, has been postponed to 2021 along with the Olympics. Offline tournaments like the ESL One in Los Angeles have been turned into online events; likewise, the League of Legends Championship Series (LCS) and Counter Strike: Global Offensive’s Pro League have been made online-only, spectator-free events.

In March, the mobile eSports platform Mobile Premier League tied up with World Cricket Championship 2 (WCC2) to host tournaments, in a bid to target India’s cricket-hungry audience. With this, and with other region-focussed manoeuvres in India’s eSports arena, competitive online play could be set for its heyday in India.