Nemai Ghosh and his unfulfilled dreams

Ghosh captured close to 90,000 images of Satyajit Ray "in action and repose" 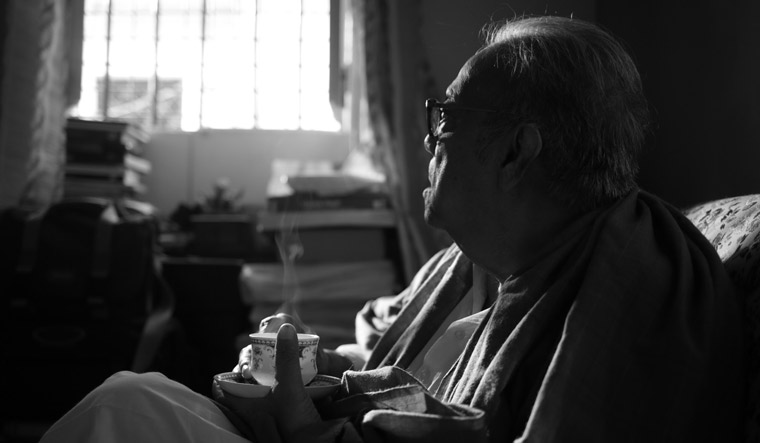 Two years ago when Nemai Ghosh was 83 years old, he went to Punjab alone to execute a new idea. In his twilight years, the famed photo-biographer of Satyajit Ray was trying to carve a niche beyond what he was most well-known for. Armed with his analogue camera and roving around in his wheelchair, Ghosh attempted to capture the temple's resplendent shade of golden in black and white—in that same inimitable style of blending natural light and shade or the chiaroscuro effect. He captured many images from this visit and wanted to come back for more, if health issues permitted. On March 25, 2020, Ghosh died after being confined to his bed for months. Like most artists, he died with unfulfilled dreams.

From 1968 until Ray's death in 1992, Padma Shree awardee Nemai Ghosh captured close to 90,000 images of the pathbreaking filmmaker "in action and repose". When Ghosh's awe-inspiring muse died, he was so depressed that he could not touch a camera for a year or two. Ghosh soon realized that Ray continued to work, even amidst the slings and arrows of fate. So he picked up where he left off. Even when the world had changed and colour photography and digital cameras were in the ascendant, Nemai Ghosh knew that no technical wizardry can replace one's own intuition, timing and compositional skills.

"Analogue photography is a classic way of doing photography; its a photographer's art. Whatever has been captured on the negative, you can't manipulate it anymore. Integrity of the composition remains intact," says still photographer Anirban Mitra. He knew Ghosh since 2003 when he first met him in Kolkata to seek mentorship and guidance. Mitra and Tirtha Dasgupta's 2018 documentary, A Ray of Light captures Ray entirely from the perspective of Ghosh in a black-and-white visual narrative, apart from tracking Ghosh's own 50-year photographic journey from 1968.

It is this documentary that Ghosh tells Mitra about his desire to frame Golden Temple. "Nemai Ghosh never created anything synthetic; he never asked people to smile or pose. He was very particular about the concept of natural light—the light that is already available, a philosophy that Satyajit Ray himself employed in his films. He was interested in the drama of light. He always told me to 'chase the light,” remembers Mitra who last spoke to a bed-ridden Ghosh on the phone about a month ago. Mitra promised to come and see Ghosh when he felt better in a short, abrupt conversation. Mitra could not reach Ghosh on the phone in the last four days that he tried. "Ghosh was a people's photographer who took candid shots. He was a purist and came from a classical school of photography. Only his art was paramount, he never cared for money or technicalities, " says Mitra who recalls a Ghosh who lived modestly in a joint family, had no luxury, and got a car only much later in life.

Ghosh became a photographer only after encountering the sheer force of Ray's personality and craft by accident, while on vacation with friends. His first love was theatre. Not many people talk about Ghosh's incredible documentation of Bengali theatre, or his behind-the-scenes take on modern masters in the art world from across the country, his images of other actors and actresses from Indian cinema even while he was assiduously photographing Ray or his extensive work documenting tribal life. In his lifetime, Ghosh had expressed a desire to build a permanent gallery or museum  dedicated to the life and legend of Satyajit Ray, which may include his photographs as well.

In the documentary, Ghosh expresses a similar worry. "What will happen to all the archival material I have of Manik-da (Satyajit Ray)? They need to be preserved and handed over to the next generations. We are only two-three years from his birth centenary, I see no preparations whatsoever."