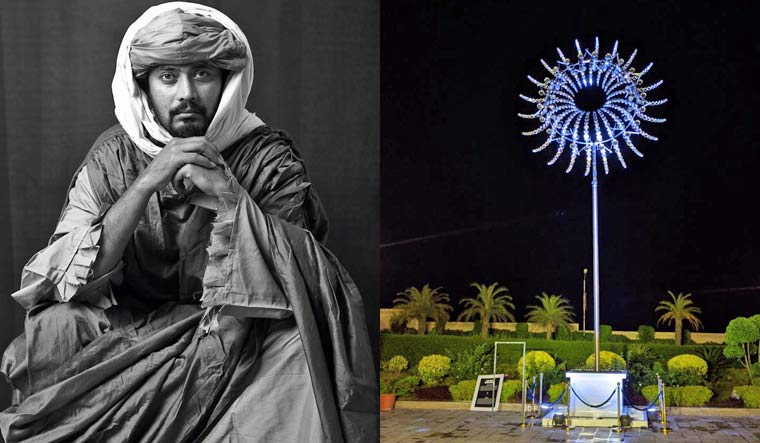 Artist/Sculptor Wajid Khan; His latest wok of art— a 40-feet spider-like installation made of some 300 steel bowls

Sculptor artist Wajid Khan is not easy to miss in a crowd. Tall and broad-shouldered, with a smooth, symmetrical face, Wajid is statuesque and sculpture-like himself. Mostly into working with iron nails—he's hammered lakhs of them into canvases to create three-dimensional portraits of figures like Gandhi, Dhirubhai Ambani, Salman Khan and Rahul Gandhi—Wajid's latest is a 40-feet spider-like installation made of some 300 steel bowls.

Visitors at the recently concluded Namaste Orchha festival, organised by the MP Tourism Board, got a glimpse of this hydra-like kinetic art locking in and out of itself in the pristine grounds of Orchha Resort. "I couldn't get a pretty face out of my head. So I had to make this piece to erase its memory," cracks up Wajid—dressed in an all-blue patient gown-like shirt—about the inspiration behind the artwork.

Born in a small village in Mandsaur district in Madhya Pradesh, this 39-year-old Indore-based artist has played with iron nails, bullets, stones, spoons and scrap to create life-size replicas of famous people. With his studio in Indore and Dubai, Wajid also calls himself an inventor, has applied for multiple patents, once created the tiniest electric iron, created artworks with shadows, medical equipment and auto-parts, and was also a Rugby player and a tempo driver. "I have always wanted to create my own identity and not follow in the footsteps of my parents. The fight to prove that I am better than what others expect me to be made me an artist," says Wajid.

There are TedTalk videos online where Wajid talks about his difficult childhood, how he ran away from home after he couldn't clear his fifth grade, and how he always wanted to create a lasting legacy with his art. It's almost as if he's also a motivational speaker. His works are installed in the homes of celebrities and politicians, including one at Rashtrapati Bhavan. And he's also in the midst of making a statue of Swami Vivekananda in Uttar Pradesh. He is also into philanthropy. Such is the ever-varied nature of his oeuvre that it's often hard to keep up with the man and his work.

But Wajid is most looking forward to three international commissions: Dubai Expo 2020, 2022 FIFA World Cup and a portrait for Queen Elizabeth. He's also tight-lipped about its details, fearing duplication and theft of designs. " I am doing something new and something very big for these commissions. It is hard to explain at this point," says Wajid. " It's a lot like kinetic art that you see here in Orchha but much bigger in scale. It will be completely in steel."

The mystery around his upcoming projects is as interesting as the current political situation in Madhya Pradesh.