Sotheby's to auction off V.S. Gaitonde's unseen 1963 painting in March

Gaitonde took a strong exception to being called an abstractionist 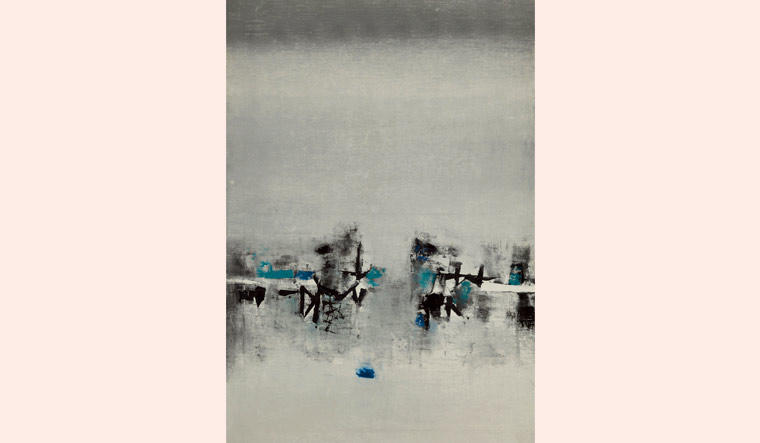 Gaitonde's work from 1963, that will be auctioned off by Sotheby's, New York on March 16 | Supplied

When an artist takes something from the natural world, only to distort and alter its contours, meaning and message —thus rendering it unrecognizable from reality—we arrive at abstract art.

But what if there is no material inspiration? How about starting with more spiritual concerns? Or better still, what if the artist doesn't even know what he is going to paint? Consider the starting point as confronting "nothingness". What happens if an artist's "interiorized worldview" is really about cultivating silence. This is what differentiates the "non-objective" art of one of India's foremost modern masters V.S. Gaitonde (1924-2001), who took a strong exception to being called an "abstractionist". "There is no such thing as abstract art," he once said. Inspired by Zen Buddhism, his obsessive immersion in the aesthetics of line and colour began in the early 1960s when he completely shifted to non-figural work.

In this work, there appears to be a distant, aqueous landscape evoked in differing gradations of blue. The canvas is grey-white, fractured by sharp chunks of black, often dissolving like shadows in still waters. If one were to locate a geographical context to this painting, one could find it in the artist's studio. Around the late 1950s, Gaitonde kept a studio at the Bhulabhai Desai Memorial Institute in south Bombay. Here he worked with other stalwarts-in-the-making like MF Husain, Adi Davierwalla, Homi Patel, Prafulla Dahanukar and Nasreen Mohamedi, alongside theatre personalities like Ebrahim Alkazi and music maestro Ravi Shankar. This creatively charged atmosphere also included Gaitonde's own quiet nook in the sprawling campus. In his own little corner on a bench near the stairs, he would contemplate the sea and waves. It is hard to de-link this work with his socio-artistic surroundings of the 1960s.

Unveiled after a gap of 57 years, the painting was bought by renowned theoretical physicist Robert Eugene Marshak who was in India in 1963 after first visiting the country in 1953 at the invitation of Homi J. Bhabha, commonly considered the architect of India's nuclear program. Marshak was once part of the Manhattan Project, US' own program to develop the atomic bomb and worked with J. Robert Oppenheimer, the father of the atomic bomb. Marshak had witnessed the havoc wreaked by the explosion of the bomb and had later joined a federation to reduce the threat of nuclear weapons. In 1963, Marshak and his wife Ruth spent six weeks at Bhabha’s Tata Institute of Fundamental Research (TIFR) in Mumbai. Bhabha was a keen patron and supporter of Indian artists then, including Husain, KH Ara, Adi Davierwalla and V.S.Gaitonde. TIFR purchased works by many of these artists and Bhabha's TIFR Collection remains one of the most significant selections of works by 'Bombay artists'.