Meet the humans who bring you 'Humans of Kerala' 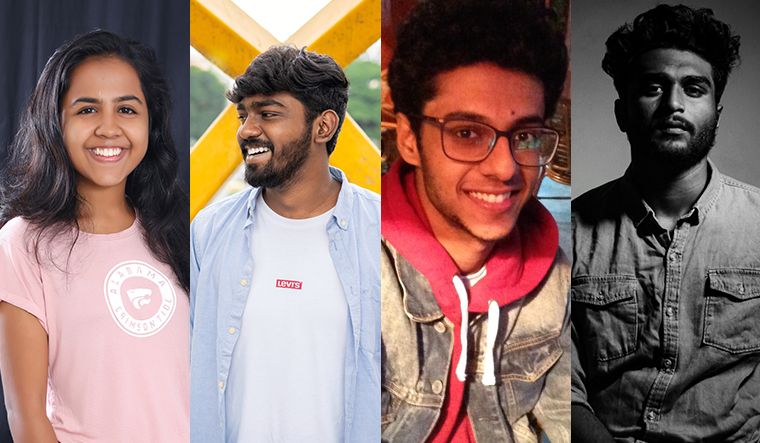 “Every one has an interesting back story; you need not be extraordinary or a celebrity,” says Sanjana Elizabeth George, one of the founders. “People who often call themselves ordinary are the ones with the most inspiring lives.” And for Humans of Kerala, every story counts—not just of Malayalis but even migrant workers who are an integral part of the state now.

Just a little over five months old, Humans of Kerala (HOK) has over 12,000 followers. The platform was the brainchild of Rahul Roy and friends Ron Abraham and Stanley James. Rahul, who graduated from Delhi's St Stephen's college earlier this year was deeply inspired by the college's in-house platform Humans of Stephen, and the hugely popular Humans of New York and Humans of Bombay pages. They discussed the need for a similar space for Malayalis in 2016, but what eventually paved way for it was the Kerala floods of 2018. “There were so many stories emerging—of people's struggles, survival spirit and many unknown heroes. We thought this was the time when inspiring stories from the state needed to be shared,” says Rahul.

The first struggle was getting the title of the page to themselves as there were a few pages, most of them inactive, that went by the same name. Requests to these page managers to give up the title were in vain. And so the four of them went forward with a prefix to the title—'Official' Humans of Kerala.

"Should we really smile for the photo? If that makes you happy, then we would. But will it hide the hardships that we're going through? Life has always been full of challenges and uncertainties for us. We bid goodbye to our families every day before going into the roaring sea, sometimes neglecting warnings or at times our own gut feeling, not knowing if we would make it back. It's a question of survival. We've told our wives to be prepared for the worst. When the floods came, we had no second thoughts in helping others in every way possible. We were about to leave for fishing, when a friend of mine from Kanjipaadam called me for help. We had already given our two boats for rescue purposes and had helped in rescuing people in and around that area ourselves. But we couldn’t say no to our friend. We were left with only two thermocol boats that were rather unsafe as compared to the other fishing boats and could only accommodate 6 people at a time. Anyway, we decided to go with them. But when we reached there, we saw dozens of families crying for help and among them were old couples, kids and even pregnant woman. We asked them to wait so that we could go back and arrange more rescue boats. I remember there was a huge cry for help when we were beginning to leave the place with the first set of people, as people thought we were abandoning them. I couldn’t wait to come back and save more lives. We rescued 5 families on a thermocol boat that day. But when we came back home that day, we saw our kids starving and had to get back to work to feed them. The floods got over, the fishermen were praised, given rewards and accolades but we did not receive any. We are not complaining as maybe it wasn’t just enough to convince the authorities that these thermocol boats could save lives. We are content with whatever least we could do to help others. A year has gone by and people do forget everything indeed. We have been jobless for a month now as there is a ban on fishing during the breeding season. Back home, we're surviving with merely one square meal per day. I am sorry but I don’t know whether to smile or cry for the picture.” [wiping his tears] - Pramod and Anil.

They launched the page after compiling about 15 stories, but this was no mean feat. Roaming around the state, observing people, speaking to them and getting them to share snippets from their personal lives requires a good deal of commitment. "When we first approached people, we did not even have an official page to show them. Also, most of the people featured are clueless about Instagram and such platforms," says Rahul. But the effort has been rewarding—not monetary benefits, but the sheer joy of connecting with simple human beings, and picking lessons from their lives. Within this short span of time, the team has also received messages from quite a few followers who express interest in offering financial aid to some of the people featured on HOK.

HOK is also slowly transforming into a platform that challenges stereotypes and lends voice to those who need it. The story of gay partners Sonu and Nikesh, for instance, grabbed eyeballs when it was posted on the first anniversary of the historic Section 377 verdict. They approached us because they wanted to come out with their story, and shatter the stigma in ways of their own, says Rahul.

“We also have something to tell everyone. Some things in our life can’t be decided by us. We have no control over who our parents should be, the country or the era which we are born into. It just happens! We want to say this in response to the questions that we were asked after coming out as a gay couple. Though we were criticized but many supported as well. We don’t have any grudges against them but it’s a grave mistake to turn the blind eye on when accepting a person’s uniqueness or identity . Last year, when section 377 was scrapped, it was the happiest moment of our lives. We weren’t considered criminals in the eyes of law anymore. It has been a year now but accepting homosexuality is still hard for people in our culture. It’s important to understand that we aren’t any different from them. We love each other like any heterosexual couple would. It maybe just involves more sacrifices. People belonging to the LGBTIQA community including us, haven’t voluntarily chosen to be the way we are. If it was in our hands, we might have not opted for it looking at the discrimination and atrocities which we have to face. Sexual orientation isn’t a matter of choice. People recognize their sexual orientation when they reach puberty. Majority in the world get attracted to the opposite gender while some to the same. It’s a biologically natural phenomenon. Just remember that everyone has the right to live. There might be a possibility that a child belonging to our community is born in your family. How would you react in that case? Would you treat the kid as “others” or shower them with tremendous love, affection and compassion? Everyone has the right to acceptance and deserve to be loved. We are looking forward to the day when all humans are treated alike in spite of the differences. Let the change happen.” - Sonu and Nikesh #humansofkerala#storiesuntold #lifestories #pride

HOK has also been roping in volunteers to help them bring more stories from Kerala's lesser known villages and towns. Besides bringing in human interest stories, the team has taken huge steps forward—by creating a space for conversations on mental health. “We realised that a large part of the mails we received and stories shared with us were from youngsters, and they mostly spoke of their mental health challenges,” says Rahul. The team understood the need for taking the conversation ahead, and stepped out of the virtual world to organise the 'Sound Mind Official' campaign.

Launched in October during World Mental Health week, the team has so far organised five outreach programmes where people gather and talk about their struggles, under the mentorship of a mental health expert. “Talking in itself is a cathartic process, and we saw some of them break down or bond with random strangers they met at the event,” says Chirag, coordinator of the campaign. Chirag Lalwani, a third-year medical student in Kochi, initially joined the team as a volunteer this year. For Chirag, a Gujarati raised in Kochi, Kerala is home. His father Sunil reached Kochi over two decades ago to set up his business, and has called the city home ever since. The story of Chirag, his father and mother who was diagnosed with multiple sclerosis 14 years ago, was yet another touching post on HOK.

How would you describe your life in a sentence? "It's a means of survival. It's a means to an end. An end that we have been given the opportunity to define. I have a wife who suffers from a neurodegenerative disease called multiple sclerosis since 14 years and has been bedridden for the past 7 years. Taking care of my wife is challenging, it takes up most of my time and energy too. She needs help with everything from brushing her teeth to drinking water. It gets depressing at times to watch her go through the pain and helplessness. We tried everything. Allopathy,homeopathy,ayurveda,experimental treatments etc. Nothing seems to work, but we are not giving up. The future may seem bleak, but we never exactly know what it holds for us. As far as I know, I am doing the best I can, My wife somehow always manages to smile through the pain. My son was lucky to have a childhood that she could be part of. And I believe in fate you know, that there is a purpose in all the hardships that one goes through in their life, no matter how depressing it gets. Due to my wife's condition, my son is inspired to pursue medicine and he hopes to help people in any way he can, whether it is by curing their ailments or even just providing an empathetic shoulder to people who seem to have lost all hope in life." What is your favorite memory with your family? "Well there are plenty, every day is a new memory. But there is a certain moment that I really treasure. It was when my wife, son and I watched, what was actually going to be our last movie together in a theatre." Want to know our favorite dialogue from the movie ? "All is Well. " - Sunil Lalwani

For HOK, the journey has just begun. There are many more stories to be unearthed—those of ordinary people who have lived extraordinary lives.