What makes this Gandhi statue in Luxembourg a rare find 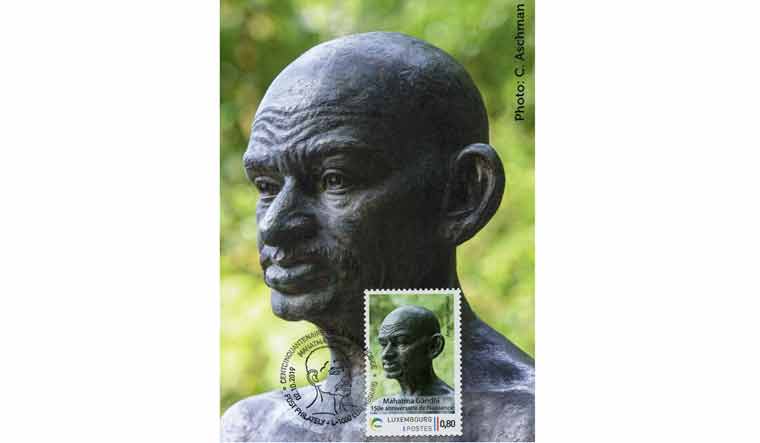 The last time we heard of Mahatma Gandhi sans his signature frames was in 1999. It was a gardener who noticed one morning that the father of the nation was not wearing his famous round spectacles around his face, as part of the 'Gyarah Murti' statue in Delhi's Chanakyapuri. The eyewear thief who pilfered the crucial accessory from Bapu's face leading the Dandi March remains a mystery to this day.

But a Gandhi bust in Luxembourg's Municipal Park has been devoid of glasses since the time it was unveiled in 1973. Not because it was stolen but the original bronze bust sculpture was carved that way by the Indian modernist sculptor-painter-poet Amar Nath Sehgal.

This tiny but significant deviation in the artistic canon of Gandhi statues was observed when the Post & Telecommunications department of the Grand Duchy of Luxembourg collaborated with the Department of Posts-Philately of the Indian government to officially launch commemorative stamps carrying the image of the bust to mark the 150th birth anniversary of Mahatma Gandhi on October 21.

The image, set against a leafy backdrop, accentuates other aspects of Gandhi's face, especially the nose and the lips, with a piercingly contemplative gaze in the absence of glasses. Tara Gandhi Bhattacharjee, daughter of the youngest son of Mahatma Gandhi—Devadas—was also present to celebrate the launch of the stamp at the Luxembourg embassy in Delhi along with Jean Claude Kugener, Ambassador of the Grand-Duchy of Luxembourg. “This is a rare sculpture of Mahatma Gandhi without glasses. I am not sure of his age the image is trying to convey, but he looks much younger. And it closely resembles the face I remember,” said Tara on the sidelines of the launch. Her son and great-grand-son of Mahatma Gandhi is living and working in Luxembourg.

The face has been rendered by Padma Bhushan awardee Sehgal who moved to Luxembourg in 1979 after he came into contact with officials from the country during a 1965 exhibition at the Museum of Modern Art Paris. The artist lived in the country for 24 years before moving back to India in 2004. He was invited by the prime minister of the country to set up his studio and live there. The amber, copper and gold hues of a Luxembourg autumn have often percolated in some of Sehgal's watercolours and many of his pieces can be found in the public and private collections there. But the Gandhi statue remains one of his most seminal pieces of artwork in the country.

“We have established diplomatic relations with India 71 years ago and the Gandhi bronze bust was created by the modernist artist Amar Nath Sehgal. Some call him the 'Indian Henry Moore',” said Kugener. Sehgal is also remembered for pioneering intellectual property rights in the arts, or an Indian artist's moral right on copyrights in a famous 13-year-long legal battle Amar Nath Sehgal v. Union of India when a bronze mural of his was removed without his consent from Delhi's Vigyan Bhavan in 1979. He eventually won the case. His house-cum-studio in Delhi's Jangpura neighbourhood was opened as a private museum this February.

Sehgal (1922-2007) struggled with painful memories of Partition all through his career. He dealt with his inner turmoil by constantly trying to convey the mood, feelings and attitudes of his subjects, even if they were not easily expressive. By showing a non-bespectacled Gandhi, Sehgal has attempted to access those hidden dilemmas and anxieties.