Opening art to the creative: The Hidden Tales 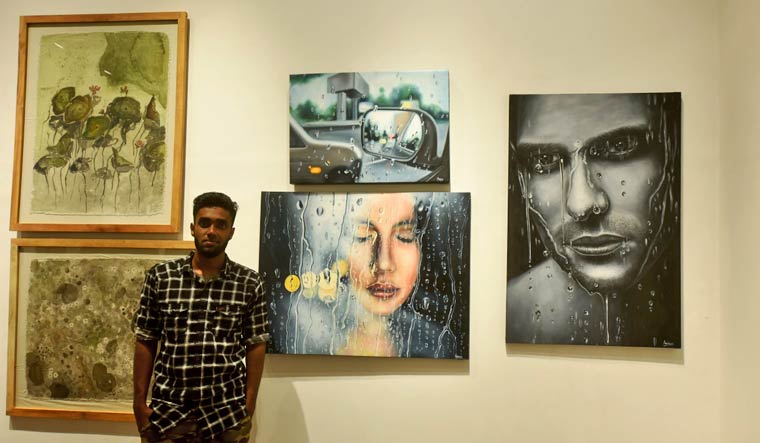 The artwork of Anand P. Joy, an architecture student and artist | Heera Paresh

What happens when you open the doors of the art world to anybody with a creative idea? This concept, akin to a people’s art gallery, is what the Hidden Tales hopes to achieve, with an art exhibition underway in Kochi that promises to make art more accessible for both creator and audience.

The vision of this community is to bring young talented artists forward and provide them with a better platform. “The common people tend to have a strong disbelief [about] art, which needs to be corrected and make them aware that it is something very common,” says Lekshman Ajithan, founder of Hidden Tales. “We don’t have any restrictions to our community; anyone who is creative can join us. Complete freedom is given to the entire members. There is no entry fee for our exhibition as well.”

The result is an all-encompassing group of young artists, including writers, painters, photographers and more, who have come together to display works in every medium. Their 16th exhibition, titled ‘Hidden Tales Unveiling Season 2’, was inaugurated by Ajayan Chalissery on July 24, 2019 at the Kochi Durbar hall, featuring the works of 67 artists, including photographs, paintings and poetry. 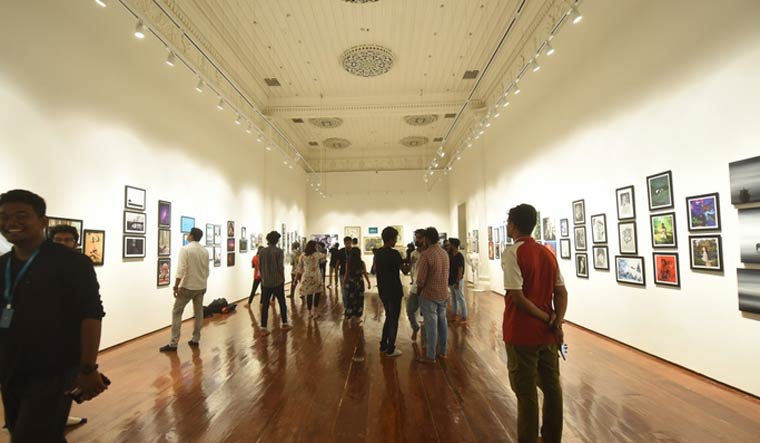 The community functions all over India, with the initial focus on Cochin. 300-plus members coordinated the initiative, which runs between July 24 and July 31, 2019.

“We started as a small group of 15 youngsters passionate about photography in 2016,” says Lekshman. “We had an initial decision that ours should not be left out as an ordinary one, like every photography community. Every photograph has a back story, and this should be unveiled; hence the name ‘Hidden Tales’, which was given by Karen Sigi, one of our team members.” 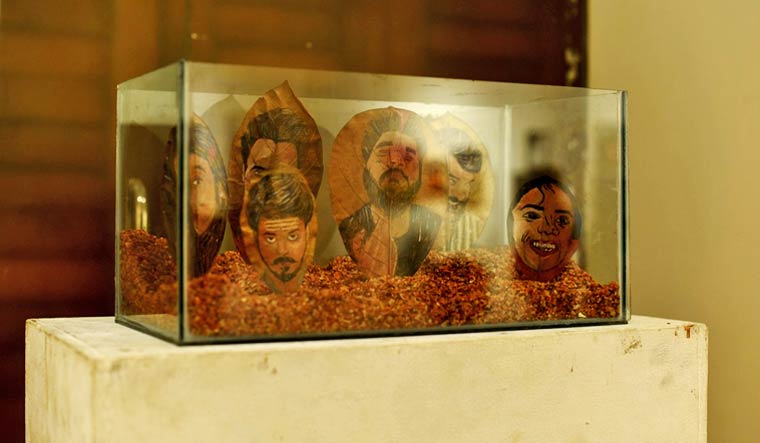 Slowly they started conducting exhibitions; meanwhile, they also felt that rather being just a photography community, this can be made into a complete platform for all the upcoming artists, including writers and travellers. They have collaborated with a social service organization called ‘Bhoomika’, for whom 20 per cent of profits are given. 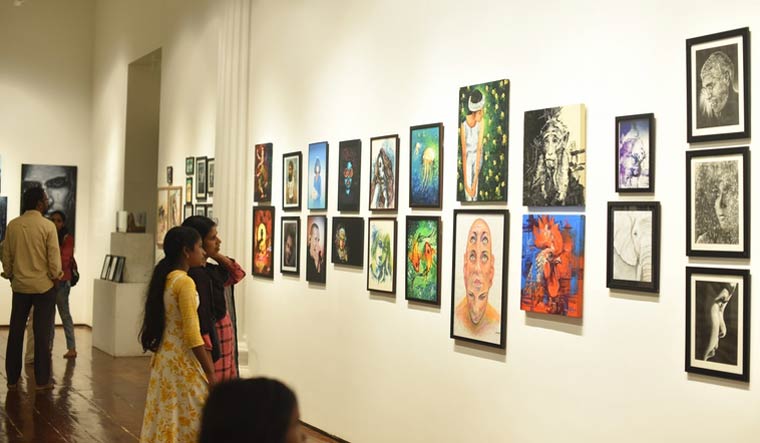 Some of the works at the exhibition | Heera Paresh

Apart from all these, Hidden Tales also conduct campaign walks, photo walks, sketch walks and sign walks. “We held Kerala's first-ever Sign Walk on November 25, 2018. The art of calligraphy is now facing extinction, due to the introduction of digitisation. Old fonts are seen to be kept apart. Sign walks are conducted to reinforce the importance of this art. The session was headed by Mr. Prajwal Xavier, a Calligraphy Artist from Kochi. We had around 17 budding and enthusiastic artists who participated in the event,” says Lekshman.

The photo walks are conducted to create awareness about photography. “The ancient photographers never had the opportunity to view a capture, unless it is printed. But the current technology assures the ease of setting up a frame, where we get to adjust all the parameters there. This never happened earlier. They used to visualize and set up the frame in their mind. We conduct the line photo walks to rewind the professionalism of photography, and bring out [these] lost skills,” says Ashil Shibi, one of the co-founders of Hidden Tales. The photo walks happen in a routine where the participants are allowed to click photos in their own perspective. It creates a learning platform as it differs from one to one. The Sketch walks are quite similar to this, with photographs being replaced by sketches. Some paintings at the exhibition | Heera Paresh

“Apart from this, interactive talk sessions titled ‘Dream Day, A Transformation’ will be held on all days. Artists, travellers and writers share their experience to the public, and also interact with them as well,” says Hari, one of the co-founders of Hidden Tales. 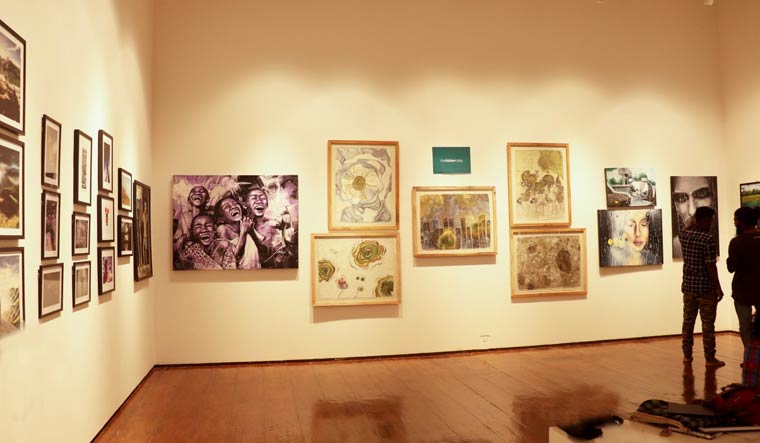 In addition to the paintings and photographs were poems and short stories written by Parvathy Madhu, the content writer for the Hidden Tales. “I am an aspiring charted accountant, who just randomly started writing long back in 2017. I used to read, and really loved the idea where the writers help us think, feel and imagine through their words, the process of how you breathe life into [a] character. It is very amazing when someone reads my stories and gets to feel the same.”

Some of the most eye-catching artworks were the ones by artist Adheep A.K. and Anand P. Joy. Anand's works were hyper-realistic paintings in a transparent series. Anand is a final year architect student and self-made artist from Thiruvananthapuram. “I mostly get inspired by the realistic paintings by other artists, that’s how I started my work. It takes almost 200-800 hours for the completion of an artwork, where I use the medium of oil paint.” Anand says.

Adheep’s paintings use natural colours and themes. “My artworks are based on a theme called ‘Axia’ (αξία) in greek, which means ‘Value’ in English. [In one], the ecosystem of a pond [is shown] in different perspectives; for instance, [the] perspective from underwater."

“The next is on ‘value’ of life, which is the painting of a person holding a child from darkness to light, and the smile on his face can totally relate to it,” says Adheep.

The exhibition is not just about paintings and photographs, with Parvathy Madhu, Hidden Tales's content writer,put up her poetry and short stories.

Hidden Tales also have an initiative called the ‘Wonder Kids’, which offers artistic training to kids, particularly those from slum areas. It was launched by Hiba Abdulkader, a final year architecture student from Calicut, who says the idea came from meeting a child who asked her what her dream was.

“This happened with an unexpected incident in my life. While I was just wandering through the Gujarati streets of Calicut, I faced a very simple question from a kid named Yusuf, yet I found it very difficult to answer as part of the ecstasy at that moment... This kept a pause on me. I asked him the same question; he gave an answer that he just wanted to paint, probably a huge museum on the walls of the factory background he lives, which he thinks as the most beautiful place on earth. And that’s where the thought process began. I started thinking so much on the purpose of my life on earth. I posted an Instagram story with the boy’s picture, and Lekshman, the founder of Hidden tales contacted me with the full enthusiasm on taking an initiative to this.” Wonderkids has conducted three workshops in Calicut with approximately 25 kids. They also help in the education of these kids.

“We aim to create an environment where art can be appreciated by even a commoner. We strongly believe in the principle that art enhances the quality of life, and is an integral part of the society,” says Lekshman enthusiastically. “We conduct charity workshops by donating the proceeds of sales art, books and accessories.”