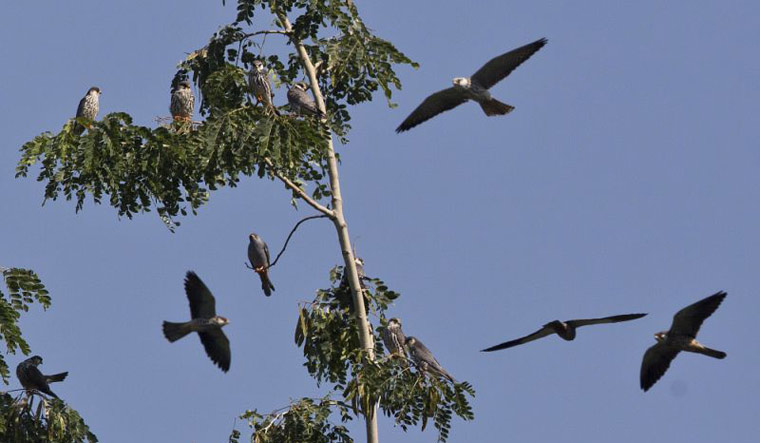 Every year in the month of October millions of Amur falcons migrate from the eastern countries of Siberia, China and North Korea to Southern Africa, in order to escape the bitter cold of the east and to embrace the summers of the African subcontinent. On their journey, they make a stopover in Indian state of Nagaland in the northeast before setting on a 3,000km non-stop flight over the Arabian Sea to reach the African shores. For years, the locals in Nagaland and also at times in Manipur would trap these pretty, dark-eyed birds and kill them—breaking their wings, plucking the feathers, stringing the birds on poles to sell their meat—before a concerted action by non-governmental organisations, activists and the government, along with help from the locals and school children put an end to the mayhem and led to the conservation of the species. All in the span of a year.

The efforts of the conservationists have been now recorded in a book for children released by the Bombay Natural History Society (BNHS). With the help of illustrations by Deborshee Gogoi and a vibrant, picture heavy, animated layout the book makes for an interesting read for children above the age of three years as it helps them understand the significance and importance of flora and fauna and environmental conservation of them. The book was written by renowned author Prabha Nair known for her engaging storytelling skills in schools across India.

The book is an interesting read especially in the simple way in which it highlights the success story of Nagaland, especially of its village Pangti which has contributed hugely towards conservation of the falcons. It lays special emphasis on the role of children involved in the conservation efforts—composing songs on the birds, staging skits on them to setting up patrols that keep a watch over their arrival.

Activities are held at BNHS