When Quixote came to Kerala: Fusing Kathakali with Spanish musico 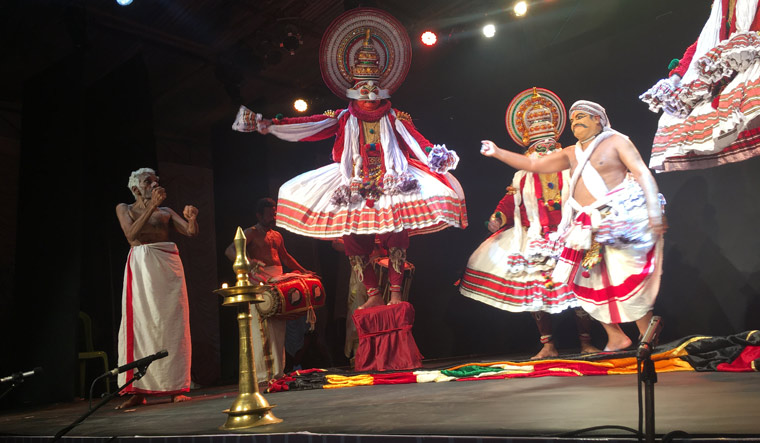 Ignacio, who was born and raised in Spain, brings a unique amalgamation of Spanish musico and Kerala’s traditional beats, accompanied by Malayalam and Spanish vocals

As the curtain rises on a dimly lit stage to the chime of chenda melam, you are transfixed to the costume of the

Kathakali artiste who plays Don Quixote, the knight from La Mancha. Confused? You will not be, once you begin to revel in an amazing performance that transports you smoothly from Kerala to Spain and back. In the words of Ignacio Garcia, the stage director, this is “the perfect combination of Spanish culture with that of Kerala.”

In the state for a second time, Ignacio, who was born and raised in Spain, brings a unique amalgamation of Spanish musico and Kerala’s traditional beats, accompanied by Malayalam and Spanish vocals. And while tale of the brave knight takes you to another world, Ignacio’s story in itself is fascinating.

Growing up in Spain, the director, who worked behind the scenes in cinema and television, has always been interested in theatre. “I used to take part in school plays. My interest grew from there,” he says. Ignacio, who loves to travel, started his career in a backstage play in Spain in 1997 at the Almagro International Festival of Classical Theatre. “When I started working I started backstage. Now, I directed a play for the festival.

The first play he directed on his own was in 1997 when he was 20. After that, he directed a few productions in other parts of Europe like England and Poland. In 2009, he started directing plays in America, and this year, he hopes to direct a play in Africa.

Ignacio, who has worked in Spanish television series MIR and Spanish films like The Valdemar Legacy and Cerulean, says he enjoys working in theatre the most. “I find theatre most comfortable because when you work with the actor, the actor gets a chance to challenge your vision and change it for the better with each time, unlike in movies where you have to work with what you have recorded. Yes, the many rehearsals are intense, but that is what makes it interesting for me.”

He finds it fascinating to work with different actors, and working with Margi Kathakali artistes who understand the art in a deeper, mystic way was an enriching experience for him. It is about matching dialogue with your vision—in this case it would be why the life in India is different from that in Spain. “What can we learn from their (Indian) way of eating, living, praying, arts; how can I learn from India,” he says.

The director, who used to play the clarinet while in school, enjoys long walks, being with nature and reading when he is not working. “I enjoy traveling and I am glad that my wife and son understand this to be a part of my job.”

Ignacio has worked in more than 60 productions so far, including a Midnight Summer’s Dream, Arizona, a play on immigration, Hamlet by A Thomas and Don Juan Tenorio. Over the years, he has worked with directors like Mauricio Scaparro and Ria Marks. “But, wherever I go, my aim is to make my work relatable,” he says.

Ignacio, who does not want a separate state of Catalonia, says, “I am pro-open borders.” He says, “Immigration has been a part of human life right from the beginning and it should be addressed as a issue or a topic not a problem. Either for religious, social or reasons like war and economic crisis, like now in Syria, people are migrating. Efforts must be taken to manage it better and regulate it and not put harsh steps in place. A lot of them are writers, doctors and engineers. And people would not want to leave their own home unless it was for a compelling reason and that is how immigration should be addressed. During the civil war in Spain, Mexico opened its doors to many immigrants. And now, the US needs to do the same for people coming from South and Central America. Look at how migration can be turned into a better thing than a negative one.”