Swami Sanand, the seer who fasted to death to save the Ganga 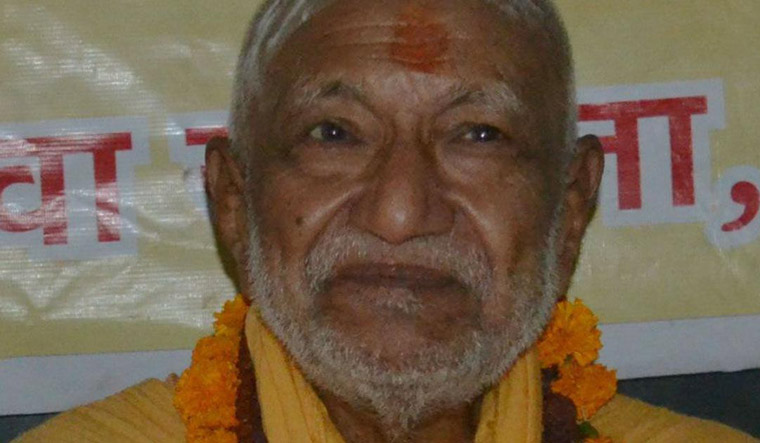 Environmentalist Swami Sanand, who was on a fast-unto-death to save the river Ganga, died of a heart attack at the All India Institute of Medical Sciences, Rishikesh, on Thursday.

The 86-year-old seer who had been on a fast since June 22 as a protest against the government’s indifferent attitude towards the Ganga, had shunned all forms of fluid intake from October 9. On Wednesday, the Haridwar administration forcefully admitted him to AIIMS.

Known as 'Gangaputra', G.D. Agarwal alias Swami Gyan Swaroop Sanand, had always been at the forefront of the fight for environmental protection. Born to a family of farmers in Kandhla district of Muzaffarnagar, Swami Sanand studied civil engineering at IIT Roorkee and was the first member secretary of Central Pollution Control Board. With a PhD from Berkeley in the US, he was the head of department of civil and environmental engineering at IIT Kanpur for two decades. Like him, his students went on to become prominent names in the field of environmental activism. Anil Agarwal, the founder of Centre for Science and Environment, Delhi, and Rajendra Singh alias jalpurush, a noted development activist, are just two names from the list. Despite such a glorious career at his disposal, he chose the spiritual path and embraced sanyas at Sri Vidya Mutt, Varanasi, in 2014.

Swami Sanand fasted at the Matri Sadan ashram in Haridwar, demanding a law for the conservation of the Ganga; there are others too attempting to draw attention to the cause in ways of their own. Rajendra Singh, his student and environmental activist, has been leading a 105-day-yatra from Gaumukh in Uttarakhand to Gangasagar in West Bengal for the cause of a free flowing and clean Ganga. Bachendri Pal, first Indian woman to scale the Everest, is on a month-long rafting expedition to raise awareness on the issue. Matri Sadan ashram, on the banks of the Ganga, has been witness to several sustained efforts for the cause. The agitation had claimed lives of two of its sanyasis in the past, one being Swami Nigamanand who died fasting in 2011.

An environmental activist till his last breath, Swami Sanand went on his first fast in 2008, leading to subsequent ones in 2009 and 2010 against hydroelectric projects at Bhairon Ghati, Lohari Nagpala and Pala Maneri, and was able to stall them all. In fact, the project at Lohari Nagpala was almost complete when former prime minister Manmohan Singh scrapped it in 2010. He got the government to declare 125km stretch of the Bhagirathi river an eco-sensitive zone. In 2012, when he went on his fourth fast, he had to be admitted to a hospital in Delhi. In 2013, he spent 15 days in jail because of his fifth fast.

Swami Sanand believed that the Narendra Modi government would go a step further for the cause of river conservation as was apparent from the setting up of a separate ministry for Ganga. His perception, however, changed and he claimed that every action of the government is a gain for the corporates, and that the people in power have done nothing for Ganga.

1. The government should bring the draft bill prepared by Ganga Mahasabha in 2012 for discussion in the Parliament immediately and get it passed. If the bill is not passed, Article 1 to 9 from Chapter 1 of the draft should be implemented by the presidential ordinance.

2. The government should cancel all under construction and proposed power projects on the rivers Alaknanda, Dhauliganga, Nandakini, Pindar, Mandakini and Ganga.

3. Deforestation, slaughter and all types of mining activities should be completely stopped specifically in Haridwar Kumbh region.

4. A Ganga Bhakta Parishad should be constituted provisionally with 20 members nominated by the PM, under oath of acting only in the interests benefiting the river.

Swami Sanand maintained a firm belief in the sanctity and healing properties of Ganga, with his research at IIT Kanpur to support it. He was of the view that rejuvenation does not suggest mere purification, but a restoration of the flow, quality and clarity of water to its original form. He had said that the government has delayed the cleaning of Ganga and intends to exploit the vote bank just by constructing sewerage under the Namami Gange Yojana. He had rejected Union Minister for Water Resources and Ganga Rejuvenation Nitin Gadkari’s plea to end the agitation as he found nothing substantial in Gadkari's assurances.

And now, with the seer's death, Ganga has lost one its strongest warriors.