Research craft will suffer if PhD is available directly after bachelor's degree: Scholars DOCTORAL RESEARCHERS have never had it easy. A 2021 study by the Central University of Kerala’s department of public health and community medicine reaffirms the grim realities of a PhD scholar’s life where they often wonder: “Why am I doing this?”

In the analysis on depressive disorders among doctoral students―published in the Journal of Applied Research in Higher Education―240 PhD students, with one half from the sciences, were interviewed to understand their mental health status. “Financial hardship, disagreement between student-supervisor, compromised students’ support services and an uncertain job market” were some of the crucial reasons reported for a range of depressive disorders. Students from economically weaker sections, earning less than Rs20,000 a month in their PhD years, veered the most towards moderately severe and severe depressive disorders, the study noted.

Why is it so hard to be a doctoral scholar in India? Among other reasons, the PhD years in India typically cover ages 25 to 32―a time to start earning an income that covers rent and food. Or when one can begin to feel somewhat financially independent, irrespective of inclinations to study or work.

To reduce the pre-PhD years, the University Grants Commission now has a revised set of norms for PhD admissions. According to the recently released draft regulations, four-year undergraduate degree holders with a minimum CGPA (cumulative grade point average) of 7.5 can now directly enrol for PhD programmes. They can skip the master’s programme. Also, those with 55 per cent marks in the four-year undergraduate degree can apply after a one-year master’s course. MPhil has already been discontinued from the academic year 2022-23. However, these reforms come amid little information on whether a PhD scholar would get a better stipend, enough for him to confidently jump into academia. 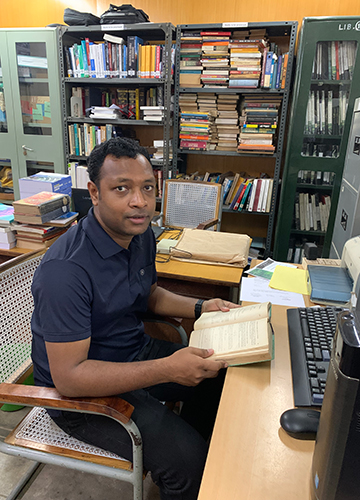 Financial insecurity is one of the biggest reasons scholars rethink their decision to pursue research. Even though PhD students in central universities are eligible for a few scholarships, not all of them are well-endowed. A non-NET (National Eligibility Test) fellowship for a PhD scholar in a central university is up to 08,000, usually claimed after the synopsis is accepted. Last year, a government-appointed panel suggested replacing this with a “NET-II fellowship”, where the stipend would depend on performance in the NET exam. This removes the concept of universal assistance to research scholars at central universities, and would hurt poor students the most.

Asked if there were plans to increase the non-NET stipend, UGC chairperson M. Jagadesh Kumar says, “Scholarship amounts are periodically increased to take care of cost of living and other expenditures that students incur. The stipend of a JRF (Junior Research Fellow) selected through NET is Rs31,000 for the first three years. In addition, an annual contingency grant of 020,000 per fellow is provided to the university/institution.” The JRF is for the top scorers in the exam. And contingency funds are for, well, contingencies and not easily claimed, less so annually, according to scholars who do not wish to be named. “If someone does not want to do a PhD after a UG degree, they can always do a PG degree and then work for a PhD degree. Isn’t it a good idea to provide multiple options and flexibility to the students?” asks Kumar.

The revised PhD reforms have several other tweaks. There are plans to do away with mandatory publication of research papers in peer-reviewed or Scopus-indexed (a type of database) journals as a requirement for awarding doctoral degrees. It is projected as a way to stem the proliferation of dubious journals or research fraud, especially seen in humanities.

These are important changes under the National Education Policy 2020, and have far-reaching implications. They raise several questions on how the research training of scholars is likely to be affected. What kind of curriculum changes in the undergrad system will prepare students for the rigours of academic research? Is it just a rush to produce more PhDs? Or is an expedited PhD only for high-performing students in college? And how will it affect the research aspirations of those seeking fellowships abroad where there already exists a power imbalance between the global north and global south when it comes to academic research?

Several PhD students across India do not think a bachelor’s programme is enough to find a firm footing in academia, no matter how focused or exceptional a student might be. Ritapriya Nandy is a second-year PhD student at the Centre for Regional Studies in the University of Hyderabad. She went into her PhD in the middle of her MPhil course, which had helped her sharpen her thesis on borderlands and migration. “You may have a very clear idea about what you want to work on,” she says, “but research is not just about your topic, theme or area, but also a practice in academic writing. One cannot simply write good academic stuff without training. MPhil was actually that training period that taught us how to write academically.”

Nandy also questions the wisdom of doing away with the need to be published in a peer-reviewed journal. “Okay, some people might see it as a burden to get their work published,” she says. “But the identity of a PhD scholar is tied to research. It is how he stays in touch with the wider academic community. You are doing a PhD because research is your passion. And this passion drives you to get published and get recognised in academic circles.” She does not believe any progressive policy for PhD students can work without improving funds and stipends for scholars.

For Shivam Mogha, who has just entered his second year of PhD at Jawaharlal Nehru University’s sociology department, completing his research in agrarian politics outside India looks unlikely. “I am one of those unlucky ones who did not do an MPhil. You see, MPhil was mileage when applying for scholarships abroad because they consider it research experience. I was the second in the waiting list for a fellowship in Germany last year but had to bow out to the one who had an MPhil. My synopsis was passed only in the second year of PhD. I might as well complete my PhD in India now because just a synopsis-pass is not enough experience for getting fellowships abroad,” says Mogha, who finished his class 12 in an Uttar Pradesh board school. “You see, in school, I did not even know there was such a subject like sociology or anthropology. I got to know they existed only when I came to college to do my BA. It was only in MA that I realised that I want to go much deeper into the subject. I feel the kids in private universities like Ashoka or Shiv Nadar have contacts to get scholarships outside. In fact, they enter their bachelor’s knowing everything about sociology and anthropology. Jumping straight into PhD after bachelor’s seems like a rich man’s game.”

Social science scholars, more than those in pure sciences and other technical subjects, struggle with infrastructural gaps and lack of funds. Also, getting published in a peer-reviewed journal in humanities is much harder. The number of reputed journals in STEM outnumber those in humanities and social sciences. For a student at IIT, it is not unheard of to jump into a PhD programme right after their bachelor’s. So much so that some of the IITs are planning to scrap or revamp their MTech programme to curb the attrition rate.

At IIT Bombay, says Naveen, they are either reducing the number of MTech seats or offering more self-sponsored seats where the students pay a substantial fee on their own. “The first year of master’s goes in coursework itself. From the second year onwards, the students start preparing for placements,” he says. “Faculties are questioning the point of these MTech programmes as they are not contributing anything to research. Students are coming here to just get a job. And most often, those who are coming in from electrical engineering hardly take up any engineering jobs. They are just going for consultancy, banking and private equity.” He adds that getting published in journals is always an unwritten rule for PhD scholars even though it is never made mandatory on paper, with each department having its own internal requirements. “It is not like it is easier for students to get published in reputed journals just because they are from IIT. For instance, it is very difficult for students in the mathematics department to get published because it is already an established, well-researched discipline. But something which is emerging like nano-electronics and AI, where the industry is just opening up, has more takers.”

Krishnan Unni P., associate professor of English at Deshbandhu College of Delhi University, does not think reducing pre-PhD years will ensure any qualitative jump in research. “It might encourage a ‘cut and paste’ culture. In humanities, research will become a cakewalk. In science, this will bring more disasters as originality will disappear.”

Lucas Tudu, a first-year PhD student in conflict studies at Loyola College in Chennai, has a more balanced view. He completed his MA in English this year, but is yet to come up with his thesis topic. “People can adjust in any circumstances if there is such a system of going into PhD after bachelor’s,” he says. “Students who choose this route will learn to cope. But the point is, they will be deprived of many kinds of learnings, information systems and ways of gathering that information. There will be a risk of a short-cut system. Sometimes I feel I would have been more confident with an MPhil. My next stage of learning would have been smoother, more vivid and more enjoyable.”