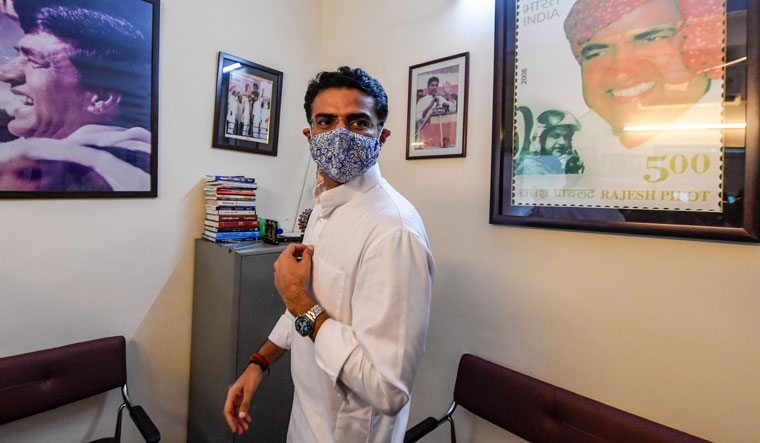 Congress leader Sachin Pilot is back in Jaipur after a month-long standoff with his bête noire, Rajasthan Chief Minister Ashok Gehlot. As the uneasy truce plays out, Pilot said the main issue that he and his fellow MLAs wanted to raise with the party leadership was about Gehlot's style of functioning.

In an exclusive interview with THE WEEK, Pilot said Gehlot had to be more inclusive in his manner of functioning and the decision-making could not be limited to just four or five persons.

He revealed that he had not wanted to be deputy chief minister and would have been happy working outside the government since he had apprehended the arrangement might not work out well.

About allegations that he colluded with the BJP in trying to topple the Gehlot government, Pilot said that he and the other MLAs had pooled in money to bear the logistical as also legal expenses of their stay in BJP-ruled Haryana. As for the court cases, he said his first choice was Congress' Abhishek Manu Singhvi, but he was already taken by Gehlot. So he turned to Harish Salve.

On the road ahead, Pilot said he was open to any role that the party gives him, but stressed that Rajasthan would always be his karmabhoomi. Excerpts:

In the one month you stayed away from Jaipur, you were accused of putting your own government in peril.

I was served a notice by the Special Operations Group of the Rajasthan Police under the sedition charge. For a serving deputy chief minister to be served that notice was unwarranted and unprecedented. We took the issue to Delhi to make the leadership understand what is going on in the government. The very next day, some coercive actions were taken, including expulsion of ministers, suspension of MLAs, FIRs being registered and notices by the Speaker. All this was not required because having a difference of opinion with the chief minister's style of functioning is not anti-party or illegal, and certainly not anti-national.

Finally, after all these weeks, I stand vindicated. We did not utter a single word against the party or our own government. Finally, when Priyankaji (Priyanka Gandhi Vadra) and Rahulji (Rahul Gandhi) met me, we had a threadbare, frank discussion for two to three hours, and all those issues were heard.

Did Priyanka play a central role in resolving the issue?

She spoke to me a couple of weeks ago. And I met both of them at Rahulji's residence. When I spoke to her [the first time], certain actions were being taken in Jaipur which were [contrary] to what was being said in Delhi.

What made you to finally sit down with senior Congress leaders and work out a resolution?

Channels for talks were open, and we were in Delhi only to talk. But on the one hand, you are discussing issues and on the other hand, you are suspending and expelling MLAs, filing cases and serving notices. The actions were not consistent with what was being said.

How will you reconcile with the harsh words used by Gehlot against you?

Even if you say such words to your house help, that person will not work in your house anymore. However, I swallowed it because I thought the political discourse needs a dignified conversation. Two wrongs do not make a right. I did not want to respond in the same tone and tenor. Things became acrimonious from their end, but we maintained a dignified silence.

All this bitterness cannot be brushed under the carpet?

I came to Jaipur as party president when the number of MLAs was reduced to 21 out of 200. Ashokji was chief minister when this happened. He was not made Congress Legislature Party leader or Pradesh Congress Committee (PCC) president. I worked with all honesty and dignity. Eighteen months ago, when the decision of who will become chief minister was left to Rahulji, he said it should be Ashokji. Rahulji insisted I become deputy chief minister. I was quite happy not to be in the government because I thought it might not work out well. And my apprehensions turned out to be true.

The chief minister said he had not spoken to you for one-and-a-half years.

Then what kind of government was he running? As head of the government, it is incumbent upon him to take everyone's views on board. But to say this gives an insight into how things may have been.

There is no point in being in the government for just a house and a car. You need dignity, honour, space and respect to work in any organisation. This is what I communicated to the party leadership. A committee will look into the issues, and they have promised us that corrective steps will be taken in a timebound manner.

So the main issue was that you were being side-lined in Jaipur?

Was there a deliberate attempt by CM Gehlot to edge you out?

When I was PCC president, I had all the right qualities. It is with respect to the last one-and-a-half years that he made some personal comments such as ‘He is English speaking’ and ‘good looking’. Why make it personal? You may have disagreements and may not get along, but the choice of words is very important. Also, when you are part of the government, you need space and honour.

Did you demand from the party high command a leadership change in Rajasthan?

With an open heart, I said everything I had to say to the Congress leadership. I think they understand the gravity of it. It will not be proper for me to spell out the laundry list of what was discussed. But the issue is not about any individual. It is about three years later, when we have another election to face.

Ashokji was the chief minister earlier when we had 153 MLAs out of 200. We were reduced to 56. [After] the second time he was the chief minister, we were reduced to 21. We are 107 at present, and we do not want history to repeat, so there must be some course correction because if we do the same thing that we did the last two times, we will end up with the same result.

You were called over-ambitious and it was said that you are in a hurry to become chief minister.

I have not asked for any position. I have been lucky enough to be a minister at the Centre and a deputy chief minister. For 20 years, I have given my best to the party.

Was there a delay on part of the central leadership to deal with the unrest in Rajasthan?

There is a structure in the party and there are people responsible for being the bridge between Jaipur and Delhi. They are supposed to be [nonpartisan] and communicate the reality to the leadership. Obviously, this was not happening. And these individuals—I will not take names—were obviously unable to do their job and were prejudiced. That is why issues kept building up.

The Congress said you and the other MLAs were enjoying the hospitality of the BJP in Haryana, protected by their police, and engaging lawyers close to the BJP for your court cases.

The MLAs had like 40 FIRs against them and feared coercive action, so they were afraid of going back to Rajasthan. Whether we stay in Noida, Delhi, Faridabad or Gurgaon, I think it made no difference. For the record, all 20 of us had pooled in our resources and paid for all the logistical and legal expenses. As for the court cases, the first person I called was Abhishek Manu Singhvi. He is a dear friend, but he politely declined, saying he was doing cases for Ashokji. The other good lawyer that I know personally is Harish Salve, who now lives in London. So, I called him. You engage professional people for making sure that you have a good case.

The very first day I had said that I would not join any political party. And 30 days later, those people who have been saying all these things have to face today's reality, that we were not in touch with anybody from any party.

No longer deputy chief minister or PCC president, what is the road ahead for you?

I have never run after posts and positions. Whatever role the party may deem fit for me, I will certainly do, but I have not asked for any position. But Rajasthan is my karmbhoomi (land of labour) and my relationship with the people and this land will be till my last breath. I have learnt from my father to seek people's blessings, be with the masses, be with the workers and help them in their bad times. That is my biggest strength.