Ladakh ready for the winter challenge 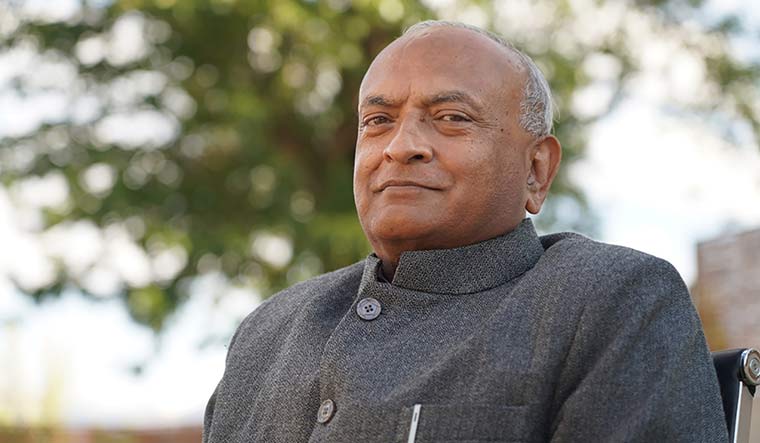 With Indian troops engaged in a tense standoff with the People’s Liberation Army on the Line of Actual Control (LAC) in Ladakh, people in the Union territory are facing multiple challenges going into the long and harsh winter. The alarming security situation and the problems posed by Covid-19 could make this winter far more challenging for them.

Leading from the front is Lieutenant Governor R.K. Mathur, who says his administration is prepared to tackle the challenge head on. As Ladakh does not have an elected legislative assembly, the role of the lieutenant governor is all the more crucial. Speaking exclusively with THE WEEK, Mathur says his administration is countering the Chinese infrastructure push on the LAC and the challenge posed by the impending winter by upgrading infrastructure and by ensuring the uninterrupted supply of essential goods such as food, water, power and medicines.

The Union territory of Ladakh was formed last winter. What were the major challenges you faced back then? How are you preparing for the upcoming winter?

The onset of the usual harsh winter soon after the formation of the Union territory was a major challenge. The administration took a number of measures to deal with it. We provided 58 diesel generator sets to remote, unconnected areas, increasing power supply by about six to eight hours a day. Additional water tankers were arranged to supply about 3.5 lakh litres per day.

With the help of the Indian Air Force, 415 metric tonnes of fresh vegetables and essential commodities were airlifted. The IAF moved 2,125 passengers and patients in and out of Ladakh, primarily from Kargil, during the winter and the Covid-19 lockdown period. Remote areas which used to be cut off during winters were issued 18 satellite phones to ensure communication for evacuation of patients and availability of essential supplies. From February this year, we have 24x7 power supply.

Looking ahead, the co-operatives maintain a steady supply of perishable items, the power department and all other concerned departments are working full time to stock up. Taking into account the Covid-19 pandemic, the medical department has been directed to procure all essential items such as medicines and equipment. We are also making sure that the snow-prone health centres across Ladakh are sufficiently equipped with essentials (to fight Covid-19).

With China building roads on its side, what are the steps taken by the new administration to upgrade infrastructure?

The Leh-Srinagar highway, which was closed due to heavy snowfall at the Zojila Pass, was opened on April 11 by the Border Roads Organisation, almost a month before the normal time, giving great relief to the people. The Manali-Leh Highway was also opened a month earlier than usual, on May 18. Early opening of internal roads like the Darcha-Padam road, which offers an alternate route to the Zanskar region, and the Khaltsi-Lingshed road, too, was ensured. Road connectivity is the base for any development in Ladakh and is being pursued with utmost importance. So far, there are only two entry/exit points connecting Ladakh with the rest of the country. We are looking at developing other routes. Within Ladakh, major works on roads and bridges have been initiated under the special development package provisions.

What is the administration doing to ensure Ladakh’s cultural integration and economic development? 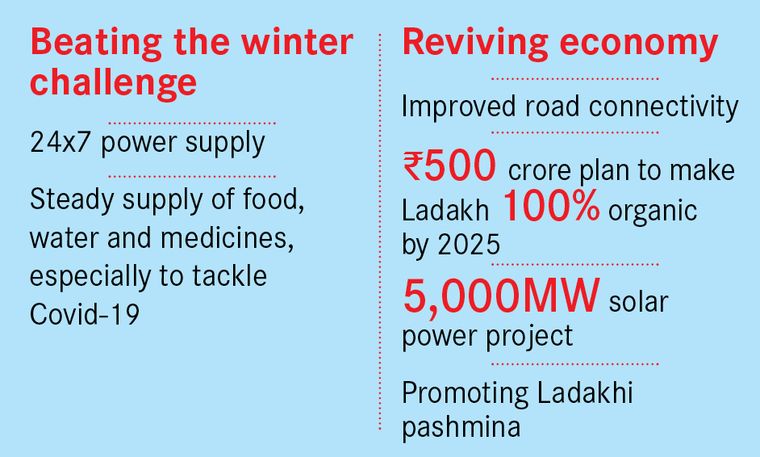 Ladakh’s exclusive culture has carved out a name for itself among national and international researchers and travellers. The tourism industry contributes about 50 per cent to Ladakh’s economy. The eagerness among people to study and appreciate this unique culture and ecosystem has resulted in a major influx of guests in recent years. We have prioritised the preservation of Ladakh’s fragile ecosystem and the ancient relics of the monasteries. Last year, the tourism and culture department successfully organised the first winter conclave to encourage Ladakh’s winter tourism capabilities. This year we plan to go even grander, complying with Covid-19 restrictions.

The Changthang plains in eastern Ladakh produce the finest quality of pashmina and we aim to develop a unique identity for it. The GI (geographical indication) tagging process of Ladakh’s pashmina is in its final stages. Recently, we sanctioned a 03 crore package to the Pashmina Growers Co-operative Marketing Society in Changthang.

How do you propose to make Ladakh self-sufficient?

One of our major plans is to improve the agricultural production of Ladakh. We have launched a 0500 crore Mission Organic Development Initiative to convert Ladakh into an organic state by 2025. This will give a major boost to Ladakh’s economy as the market for organic products is vast. Ladakh is home to a wide range of Himalayan medicinal and aromatic plants. A large variety of horticulture products like apricots and apples can be grown here. Developments in this sector will bring major economic benefits to Ladakh. A 5,000MW solar power project has been sanctioned; the tender has already been floated by the Solar Energy Corporation of India.

Can we expect Ladakh to become a popular winter tourist destination like Jammu and Kashmir?

Kashmir and Ladakh are varied in terms of culture as well as natural surroundings and, therefore, have their own USPs. Till recently, Ladakh had a negligible number of tourists in winter. We are making efforts to promote Ladakh’s winter tourism as it will ensure a steady contribution to the economy.

How do you balance the development of Leh and Kargil? There is concern that Kargil may get neglected.

The twin districts of Leh and Kargil have different needs in different sectors. They share a common history and culture, including language. The administration is well aware of the needs and is addressing those needs to enable progress and development of each district in its own way. All 12 departments of the Union territory have their offices in both districts. We are working with a holistic approach and our endeavour is to give full administrative attention to both districts.