Rename Nalanda; it is already something else 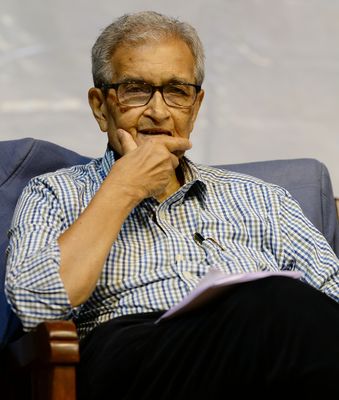 THERE ARE not many who have understood the pulse of contemporary India and its economy like Amartya Sen. In a candid interview, he talks about a range of issues from farm loan waivers to the governance of Nalanda University.
Edited excerpts:

After the recent win in the assembly elections, the Congress has announced loan waivers for farmers in these states. Is this populism or sound economics?

It is a policy of enhancing economic equity, particularly bearing on the unfortunate economic circumstances of the cultivators, especially the poor cultivators. Now, any such policy can have a measure of arbitrariness. But, given that general problem, the idea of a farm loan waiver is not a bad one. Some of the worst sufferings are well reflected in the inability of the poor farmer to pay back loans, because the kind of income they are earning is not enough. Obviously, it would be better if we could increase their income through other means. But, loans often have a disastrous impact on farming life in the sense that the poor farmer may have to sell the little land he [owns, and] might not be able to even continue his farming life. I have seen this myself as a young man in Santiniketan. Behind my house there were miles of paddy fields which were owned by tribal adivasi cultivators. Their circumstances forced them to sell off the land. Now it is full of middle-class housing. In terms of saving their lifestyles and their ability to earn an income, a loan waiver would have made a difference. Loan waiver is a policy from which considerable good can come, mixed with some not extremely powerful, defendable cases. But, taking the rough with the smooth, it is a policy for which there is a strong case.

So you clearly disagree with Raghuram Rajan, who wrote to the election commission saying political parties should be barred from promising loan waivers in their manifesto?

Raghu and I agree on many subjects and disagree on others, and when we disagree we may also know why we do so. Raghu is one of the leading financial economists in the world and has done outstanding work on how financial institutions are important. Now, the arrangement for borrowing and lending, and sticking to the terms specified at the time of lending is what any finance-concentrating economist would focus on, and I do see that, too. On the other hand, there is also the issue of equity where the financial consideration has to be supplemented by other factors including the danger of land alienation—a problem that has been discussed in India for nearly 100 years. There is a question of parity. I do not dismiss Raghu’s argument at all. On the other hand, given the extent of deprivation and distress of poor cultivators, there may be a higher case for giving consideration to equity over the importance of the maintenance of financial discipline. Without dismissing Raghu, there are cases where a departure is worth considering.

As someone in education, how do you see the outlandish comments made at the Indian Science Congress?

Well, the Indian Science Congress unfortunately has a terrible record of not maintaining any standard. I have been there a few times. Some good things happen and you do meet some interesting people. But there is no vetting of the quality of work that is presented. And when the work that is presented is not only wrong, but absurdly wrong—like aviation in ancient India or production of test-tube babies—a scientific organisation comes into serious disrepute. It is very sad that this happens. And, since the Indian Science Congress has the potential to be an institution of merit, the case for change becomes even more important and urgent.

How should academia be responding to it?

It is not only [that] the Indian Science Congress does not get opposition from the government; many members of the government, are [in fact] extremely satisfied to see science of their liking. When some writer claims that gravitational waves may well be known in future as Modi waves, you can see [not only] the absurdity of the claim, but also the fact that it may be pleasant for a certain political audience. It is not just a question of censuring the Indian Science Congress; it is also not to provide them with this kind of support. It is a question of not using the people’s money for providing completely unjustifiable claims which are untrue and which hide the real achievements of science that can be found in ancient and modern Indian history. The tragedy is that this could have been a way of being inspired by really good science, but this is undermining the cause of science altogether. This is not just falsity, but [has attracted] international ridicule.

How do you see the current state of Nalanda University, which you were forced to leave?

As you know, the government was opposed to me being chancellor, even though I was appointed by an international commission. I did not think it was worth fighting for. It was clear to me that the government would not support Nalanda as long as I was there. I thought they would accept someone other than me, namely George Yeo, who was finance minister of Singapore. I thought they would support him. But, he found that the government would not accept most of his decisions. There was politics driven by hindutva-oriented reasoning. He wrote several times to the government and did not get an answer. Eventually, he resigned. Now, Nalanda is being governed by people who have had little interest in the Buddhist past of India or in contemporary science. Nalanda is today a very different institution. I believe there is also a sharp decline in the number of students. We had 100 students coming in every year. Now I think the number is at about 20. It is very sad. I wish they would rename Nalanda and call it something else, since it is already something else. It is no longer a replica inspired by the oldest university of the world.

You have been a critic of the Narendra Modi government. How do you see the environment today?

There has been a violation of liberty and freedom of expression, as well as the political ability to pursue your own line of reasoning. This has been a major setback. This is not to say that previous governments have never done the same. It is not to the glory of the previous Congress government that books were banned, and so on. But, that bad record has been made much worse in last few years, including the killing of independent journalists and rationalists. It is terrible that in a country where the Constitution guarantees individual freedom, these are being violated with such impunity. I am distressed, but I think so is the Indian population. I think the government fears it could be voted out of office because people are beginning to be disillusioned. The gap between the rhetoric of promises and what actually happened is quite large, and I think people can see that.