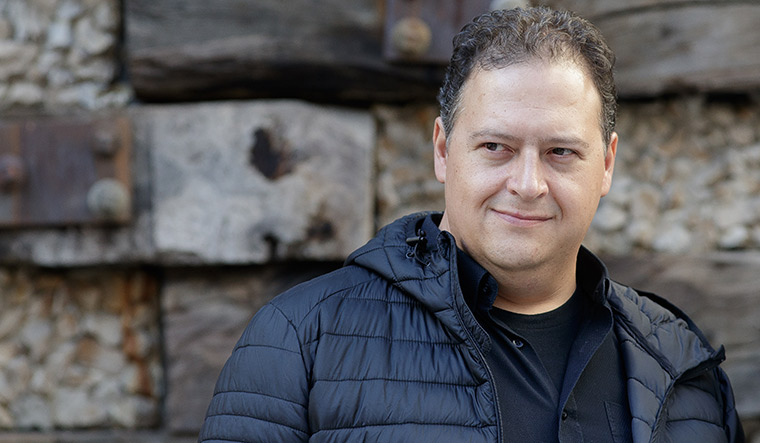 IN 1993, WHEN PABLO ESCOBAR, the supremo of the Medellin drug cartel, was killed by the Colombian police, his 16-year-old son Juan Pablo Escobar vowed revenge against those responsible for that. The world expected the boy to follow in his father’s footsteps. Twenty-five years later, he is a man of peace, seeking forgiveness from the victims of his father’s crimes. Marroquín, who is now an architect and author, recently came to India for a private event. When asked whether he hates his father for his crimes, Marroquín said, “I cannot hate anyone, that is not the man I chose to be.” Edited excerpts:

You changed your name from Juan Pablo Escobar to Sebastián Marroquín. Why? Did the long shadow of being your father’s son get too much for you?

Not for me. But, the whole world did not want to give us a small place on earth to live. We did not ask for privileges. The airlines did not sell us airplane tickets. We asked the help of the Vatican, the International Red Cross, the United Nations, and nobody helped us. So, the only option to escape from violence was a legal change of identity. And, thanks to that, we are still alive.

You believe that your father ordered the assassination of 2,000 people. How did a son grow up sane with that sort of knowledge?

My father raised me with love. And, at the same time, he did not give me a good example outside home.

I received a lot of love from my mother, too. So, I can say that love saved me from being a bad man as my father was.

You have reached out to the families and relatives of those your father killed. Why? Was your apology enough?

No apology is enough as my father had inflicted so much pain to those families. I took moral responsibility for his sins and crimes. Who else is there to ask for forgiveness? I believe in forgiving. It is possible. I have already experienced that from more than 100 families who were victims of my father’s actions. Forgiving is not about forgetting things. It is about healing. About finding a way to stop the pain and hate. Justice should be done, but [it does] not always necessarily provide tools to repair the souls of those who suffered.

The Netflix series Narcos featured your father’s story. But you were concerned about the fact that it glorified your father. Can you elaborate on your misgivings?

They glorified my father. They portrayed him as a hero. No wonder why I received thousands of messages from all over the world from young kids who now dream to be like him someday. When people watch Narcos, they want to become like my father. [But,] nobody will dare repeat his story if they read my book [Pablo Escobar: My Father]. We should all thank my father for showing us the path we should not take.

Is it not surreal that there are Escobar tattoos, beer bottles and T-shirts. This is a narcoterrorist we are talking about.

Life is surreal. My father is now considered the “Elvis” of the drug business, thanks to Netflix. He is like a rockstar now. And, some also considered him the Da Vinci of crime. I am just trying to make the world aware of the consequences of this violence sponsored by the war on drugs.

Once you understood who your father was, did you hate him? Did you resent him after his death?

I would never judge my father. I am part of him. He gave me my own life and raised me with love. I faced him many times and asked him to stop violence, but he never listened. I cannot hate anyone, that is not the man I chose to be. I am a man of peace. I was raised in a culture that says: You should honour your father and your mother. It is hard to stay neutral with a father like him.

The official version is that Escobar was shot. You believe that he killed himself to save your family.

He allowed his enemies to find him when he intentionally broke his golden rule: “Do not ever touch the phone. If you do that, you are dead.” I tried to protect him. But, he kept calling. He realised that as [we were] hostages of our own government, the only way out for us—as his family—was his death. And, perhaps, he committed suicide as the biggest act of love for his family. Because, that was the only thing that could set us free.

You grew up with a surreal amount of wealth. Zoos inside your home and choppers that ferried hamburgers. What do you remember of that time?

Imagine having your own Jurassic Park in your backyard. Even before [Steven] Spielberg’s movie.

What was it like to give up all that wealth?

It was the only honest way to start from scratch. Thanks to the Cali cartel [ a rival drug cartel] that took all our money, I am the man I am [today]. Because money can easily change your way of thinking.

What was the role of the CIA in the narco business?

They used my father’s drugs to fight their war against communism in Central America in the early 1980s. That is Barry Seal’s [an American pilot who became a drug smuggler for Escobar’s Medellin cartel] story.