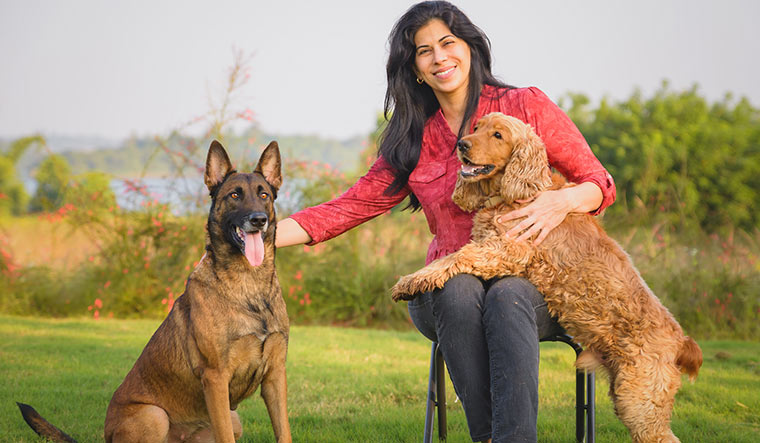 Dogs don’t look at appearances, they look for kindness,” says canine behaviourist and trainer Shirin Merchant. “Dogs communicate so much without a word being spoken. What pet owners need to do is to learn to listen to the unspoken language.” Shirin is the first person in Asia and one of only nine people in the world to gain accreditation in Companion Dog Training and Behavioural Training from the KCAI Kennel Club of England. “I applied and passed a stringent exam by the Kennel Club of England's Accreditation Scheme for dog trainers and behaviourists. In doing so, I also got qualified by the city and guilds,” she says. “The exam included practical training sessions and a rigorous theory exam. The Kennel Club sent a representative from England to assess me. I am the only person outside of Europe to have achieved the accreditation till date.”

Born into a dog-loving family, little did Shirin know that she would take up canine training as a profession. In her early 20s, she met the English canine behaviourist and trainer John Rogerson when he came to India to conduct a course. The meeting changed the way she looked at dogs. “Initially people told me it is a waste of time. They said Indian women can’t train dogs. But I chose to ignore everybody,” says the Mumbai-based canine trainer who, in 2018, won the Government of India’s ‘First Ladies Awards’ for women who have transcended barriers to achieve a milestone and are declared to be the ‘first’ in their respective fields. According to Shirin, there is a big difference between a dog trainer and a behaviourist. “A trainer is a person who can help with basic training of a dog like teaching manners and obedience. But a behaviourist is a notch up—a person who is qualified to help pet parents struggling with behaviour issues such as aggression, separation and fear,” she says. In 1998, Shirin and her husband, Junaid, set up Canines Can Care to train companion dogs for the elderly and people with disabilities, and search and rescue dogs.

When Bhuj was struck by the devastating earthquake in 2001, Shirin and Junaid drove from Mumbai to Gujarat with two of their dogs that were trained in search and rescue. “Our dogs kept sniffing through the piles of debris and rubble,” she says. “I distinctly remember how a small boy wearing tatters came to us when we were leaving and offered a packet of biscuits for the dogs. It was probably the last bit of food that he had and he wanted the dogs to have it.”

It is not just sniffing that dogs are good at; they can do everything from opening doors to fetching medicines and even bringing help in time of an emergency. For 21-year-old Karann Shah, who has type II spinal muscular atrophy (a genetic disease that affects the motor nerves), his female Labrador, Angel, is more than just an assistance dog. Karann’s movements are restricted and he is confined to a wheel-chair. “The disease claimed Karann’s elder brother at the age of 14,” says Shirin. "He was devastated after that, but Angel brought a ray of hope. Not only does Angel fetch the newspaper, she also removes Karann’s socks, puts away his shoes, calls his mother on command, brings the phone when it rings and also puts the trash in the bin.”

According to her, most people do not do proper research before owning a pet. “They bring the dog home and then suddenly realise it is not for them. Pet ownership is all about responsibility, time and commitment,” she says. The dogs are trained through play and reward and relationship-based method, and clicker method. Among these, the clicker method is considered to be most effective; it is based on a positive reinforcement reward system. A simple plastic box with a metal tongue, the clicker emits a sound when compressed. It is sounded when the dog is in good behaviour. It helps the dog identify the precise behaviour that the trainer desires and try harder to achieve it.

When it comes to achievement, Shirin has a lot in her kitty. She started India’s first canine magazine and pioneered the concept of ‘Canines for Corporates’— offsite training camps where office-goers could learn about trust-building, leadership and empathy. She also produced Asia’s first educational dog TV show, Unleash! With Shirin Merchant, in Sri Lanka. Accolades aside, all that Shirin wants is to make the world a better place for all the pups out there.

You cannot train an older dog: Obviously, it would not be as easy as training a puppy, but it is never too late. Another myth is that you can’t train a dog until it is six months old. This is also not true. Guide dog puppies all over the world start their training as young as six weeks.

Eating meat makes dogs vicious: One of the main myths about dog is the food they eat. People believe that meat-eating dogs would turn vicious or that if an animal tastes blood, it can kill people. A balanced diet that suits the breed of your dog should do just fine.

A dog cannot live in a flat: The size of the house also does not really matter if your dog has an exercise routine outdoors. It becomes unhealthy when parents restrict their dogs to the balcony of their apartments. So, as long as your pet gets its exercise outside your house, keeping dogs in apartments is absolutely fine.